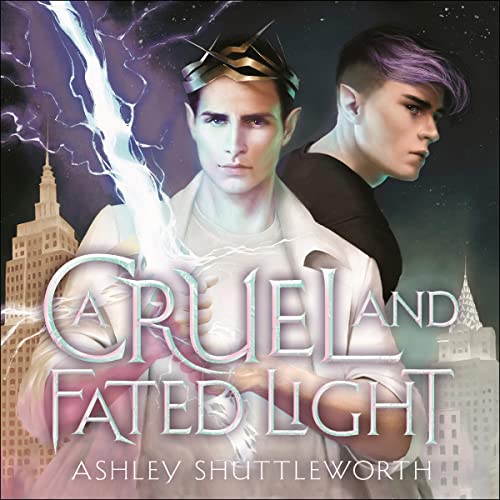 A Cruel and Fated Light

An ailing king. An ambitious queen. Four tenuous friends. And a deadly game that threatens them all.

The stakes are higher than ever in this thrilling sequel to A Dark and Hollow Star.

After thwarting the man behind the gruesome ironborn murders—and breaking several fae laws to do so—all Arlo wants is a quiet summer. As the deity of luck's Hollow Star, capable of bringing about endless possibilities, this shouldn't be too much to ask, right?

But someone is still trying to summon the mythical Seven Deadly Sins. All signs point to immortal meddling, and if this is the gods' attempt at returning to the Mortal Realm, it's Arlo they're going to use to do it.

When Queen Riadne offers to host Arlo at the Seelie Summer palace, she jumps at the chance. She'll get to see more of Vehan and Aurelian and perhaps even work out her complicated feelings for the gorgeous ex-Fury, Nausicaä. But no one trusts the infamous Queen of Light, even as Arlo wonders if she's just been greatly misunderstood.

With the Summer Solstice quickly approaching, everyone expects Riadne to finally challenge the High King for his crown. And as Arlo struggles to get control of her powers and take charge of her destiny, she'll soon be faced with a choice that won't only change the fate of the Mortal Realm forever, but could condemn it to a cruelty the likes of which the Courts have never known.

This story, these books have managed to pull me back into a state I remember only from my early teenage years, when a book could capture me so profoundly, so completely that everything else around it fell away. I couldn't read fast enough to find out what happens next and at the same time reread every other sentence as to not miss a single detail in the beautiful structured words.

I don't remember a book that made me fall in love with every single character in this way. The world building, the intricate and complex relationships, the casual worldshattering revelations strewn here and there.. this sequel is amazing!

Though (very mild spoiler ahead) I am rather mad that this book ended where it did. Because how am I supposed to be able to wait until the next book comes out?!?!