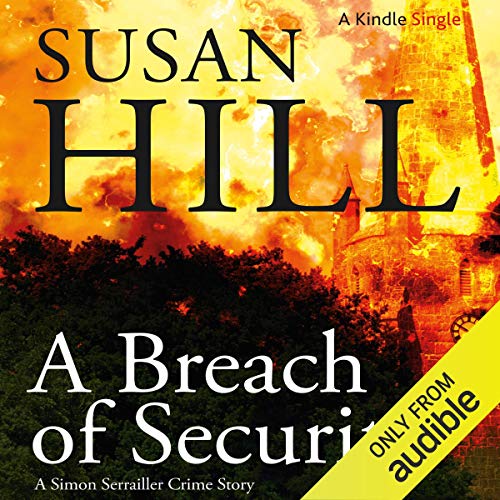 A Breach of Security

A Breach of Security

When a bunch of neo-fascist thugs named The Bulldogs attack a Gay pride march in the sleepy country town of Lafferton, detective Simon Serrailler moves quickly to find the assailants. He’s already got his hands full making security arrangements for a memorial service to honour soldiers returning from Afghanistan. When anonymous threats come in, Serrailler wonders if the Bulldogs are behind these too - and worries that they know the Prince of Wales will be in attendance. As the day approaches, the threats intensify, and Serrailler finds himself racing against the clock to prevent catastrophe.

Susan Hill has won the Whitbread, Somerset Maugham, and John Llewelyn Rhys prizes, as well as being shortlisted for the Booker Prize. She has written 55 books in several genres, including the ghost story The Woman in Black, the play adapted from which is still running in London’s West End after 25 years. I'm the King of The Castle has been a GCSE set text. She has also published collections of short stories, fiction for children, several nonfiction books and the highly successful crime novel series about the detective Simon Serrailler, who features in a short story here for the first time. Her new novel, The Soul of Discretion, is the eighth in the Serrailler series, and will be published by Chatto and Windus in October. Susan Hill is a Fellow of the Royal Society of Literature, a Fellow of King’s College, London, and was awarded a CBE in the Queen’s Diamond Jubilee Honours of 2012.

So glad I found this free story!

I"ve had Hill's Serailler series in my wish list for years, but hesitated to hit "buy." This short is just OK; however, the listen tells me enough to know that I will enjoy a full length Hill listen-- a well-written modern take on a village cozy with police procedural added, somewhere between the depth of PD James and the lightness of Deborah Crombie. The excellent narration lives up to the positive reviews of Pacey as the voice of this series.

I'm familiar with Susan Hill for some of her ghost stories, and downloaded this free offering because I enjoy her writing. This is not an especially compelling story outside of the context of the main character's detective series. But the writing is very good, the narrator excellent, so based on this snack sized sample, I am interested in looking at more of the series. Thanks for the freebie, Audible.

NEO-FASCIST THUGS
Do not get confused, this is not about fascism, gays or even bad guys. This is a great look into what police departments go through these days, when there are public parades, etc.., and bomb threats. Every bomb threat has to be taken serious, even if it seems false. The police do not take sides, they have to stop threats before they happen. We always hear about when the police get it wrong, but not when they get it right (and I am not saying they get it right here). The bad guy only has to strike once to be successful, the police have to cover everything, all the time and when successful, no one even knows.

I only gave the story three stars, but still believe this could be an eye opening listen to many people. It is free and only an hour and half long.

okay, this was fun, but I want an entire book. Love Susan Hill's books and can't wait for the next one.

I enjoyed this novella mystery and would like to read more of the series.

Serrailler is a detective who takes his work seriously. He is focused on duties planning security for an upcoming memorial service at which the Prince of Wales is expected. Serrailler isn’t happy to have to investigate a gang of neo-fascists who call themselves The Bulldogs after they attack participants of a Gay Pride march. Then threats are received regarding the memorial event. Are the attacks and the threats connected? Can he and his coworkers keep the Prince and soldiers safe?

I enjoyed this very quick listen. The story is well written with enough character development and story plot to make it interesting. There is a glimpse of Serrailler's off duty time as he tries to relax with his sister and one of his nephews. I like Serrailler as a character and appreciate this chance to sample the author’s work. There is a bit of swearing that I don’t like but that is not unexpected in police, crime thriller genres.

Audio Notes: Steven Pacey provides solid narration. As the story began I double checked the narrator as the accent made me think of a (different) famous British actor. Pacey makes the story even more realistic with expressions of exasperation, disdain and frustrations totally fitting the setting and characters.

Loved it , interesting to the very end ,I could listen to it again with pleasure

Good, suspenseful book. Made you keep listening to find out what happens. Recommend this book to others. #tagsgiving #sweepstakes

This short story was quite good. I have never read any of the other books in the series, and this worked fine as a stand alone. Although I was able to figure out who did it, I didn't figure out the motive. The writing was good and I will probably try the first in the series at some point. Note: This was free on audible at the time I got it.

this book was boring, i could't get through it. I tried several times but it seemed to go in circles