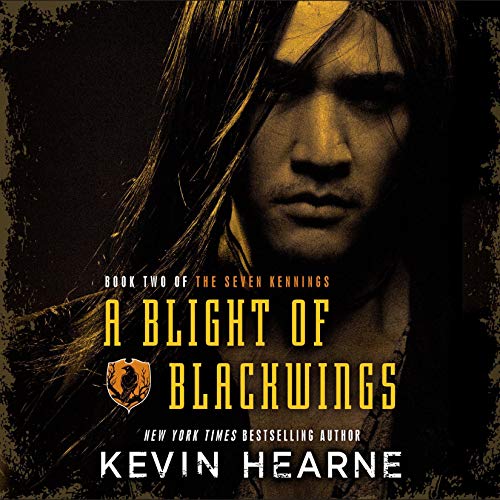 A Blight of Blackwings

From the New York Times best-selling creator of the Iron Druid Chronicles comes the highly anticipated sequel to A Plague of Giants: A world-breaking war - an invasion of giant warriors - inspires a movement to fight back.

Daryck is from a city that was devastated by the war with the Bone Giants, and now he and a band of warriors seek revenge against the giants for the loved ones they’ve lost. But will vengeance be enough to salve their grief?

Hanima is part of a new generation with extraordinary magical talents: She can speak to fantastical animals. But when this gift becomes a threat to the powers-that-be, Hanima becomes the leader of a movement to use this magic to bring power to the people.

Koesha is the captain of an all-female crew on a perilous voyage to explore unknown waters. Though her crew is seeking a path around the globe, Koesha is also looking for her sister, lost at sea two years ago. But what lies beyond the edges of the map is far more dangerous than storms and sea monsters....

In this sequel to A Plague of Giants, these characters and more will become the voices of a new generation bringing hope and revolution to a war-torn world.

A Plague of Giants • A Blight of Blackwings • A Curse of Krakens (coming later!)

“So strong [that] it is very easy to become immersed...Kevin Hearne is continuing to prove how earned his reputation is as a storyteller at the top of his game who is continuing to push his storytelling skills to new heights. A Blight of Blackwings is an immensely entertaining, rewarding, and powerful novel.” (SFFWorld)

Only so much fantasy I can buy into

I loved A Plague Of Giants and couldn’t wait for this book. I was disappointed in this addition to the series. It advanced the characters and plot very little. There was only sporadic conflict that easily resolved itself with a win for the protagonists. This book seems more like Karl Marx’ fantasy than Kevin Hearne’s. I can suspend belief and buy into people that talk to animals and control the wind but if Hanima’s communist city state doesn’t end in totalitarianism, mass starvation and bloodshed, like every time it’s been tried in the real world, that may be a bridge to far.

One of the best!

One of the very best stories. I pine for the next book. There is such wonderful character building and the language K.H. Uses is very fresh, contemporary and story driven.

‪Kevin Hearne’s masterful weaving of stories, creating the larger tapestry of The Seven Kennings is the work of a true Bard. As the threads come together under his incredible hand, readers are drawn in, waiting, mesmerized by the picture slowly coming together.

Luke Daniels and Xe Sands bring the characters to life ~ making them even more tangible in the telling.

As with the first book in this series, I enjoyed listening to this one so much that I'm starting it again, some 14 hours after I listened to it for the first time. I just can't wait!

Absorbing and entertaining, Kevin Hearne’s at the top of his game with this series.

I enjoyed ’A Plague of Giants’ so much, and awaited the sequel so eagerly, that I read it three times!
‘A Blight of Blackbirds’ definitely delivered on the promise of ‘Plague’...
Kevin Hearne has created a fascinating world with a brilliant system of magic, vivid characters and this richly imagined universe you just don’t want to leave! Coupled with the brilliant narration of Luke Daniels and Xe Sands, this is top-notch fantasy to get lost in!
If you love fantasy, don’t waste another second! Start with A Plague of Giants, but don’t miss The Seven Kennings!

Daniels and Sands performance brings these characters and their world to life.
The characters are diverse and compelling, and the story totally pulled me in.

I have enjoyed all of Kevin Hearnes book, both in print and in Audible format. I thought the first book in the series was good but I didn't really connect with any of the characters. That changed in the second book and I really enjoyed it and grew very invested in the characters. I am impatiently awaiting the next installment.

I really love this series so far. Very cool magic system, great characters, and a very interesting world. Looking forward to how the story develops!

Just the thing while we hunker down

This hits the spot. I so need distraction while this pandemic lashes at us the the bands an approaching hurricane. Oddly hard to find something that engages me. Corona shelter-in-place given me some kind of attention deficit. But these books hit the spot. I like the stories and the writing. The narration is marvelous. I freakin’ adore the characters. I eagerly await the third book!

Hearne has really developed into a fantastic story teller. IDC was an amazing series and now The Seven Kennings is turning into another series I can't wait to get through. Luke Daniels and Xe Sands are stunning with the narration. This is an intricate story with an amazingly complex cast. This book really develops not only the story, but builds upon the depth of each character. I know it's going to be at least a year, but I'm truly sitting on pins and needles waiting for the next one.

This series just is for me, it never gets boring and I love to have a detailed character design. You see come characters grow, continue and others who end. Not loosing the main story at all and linking the past with the presence.
Really looking forward to the next book