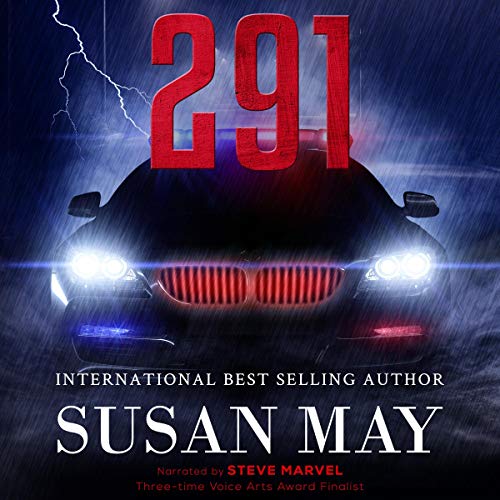 Every road is the wrong road when you’re driving 291.

This was not the first-time that rookie cop Michael Chambers had found himself stuck in this broken-down police vehicle while the rain bucketed down outside.

In fact, this kind of "bad luck" had happened almost every time he’d been assigned car 291. Usually, he’d get a flat, or the locks would jam, or the damned on-board computer would freeze.

291, though, had a bloody and tragic history, which might explain why this piece of metallic crap seemed so intent on driving him crazy - excuse the pun.

At first, he jokingly called it the demon car, but now he realized he may not be far off the truth. Something lurked inside this car, and whatever it was, it meant him harm.

He was beginning to seriously believe that if he didn’t fight back soon, this car might be the death of him. And he wasn’t about to let that happen.

From international best-selling suspense author Susan May comes a story of possession, desperation, and one man’s battle against an unknown enemy. 291 is a brilliant novella-length tale that will leave you breathless until the very last second wondering, "What just happened?"

Does This Car Need a "Worthy" Cop?

A scary car…with a twist!
What would you do if you weren’t very happy in your new job, and on top of that, the one piece of equipment that you had to use constantly apparently HATED you? Not just any job, but one you had to work hard for, invest of yourself and your time to get, and had a lot of personal identity and self-worth tied into, so you felt like you couldn’t just walk away… Susan May has given us a main character that we may not exactly like, but as time goes, we can definitely feel for. And..I didn’t expect to laugh, but I did.
This is a quick story that keeps you listening.
Great narration!

**I was provided a comp code for the Audible in exchange for a fair review.

Fans of police procedurals and haunting will definitely enjoy this title. Take a ride with a rookie patrolman into the unknown. Wonderfully written and finely narrated, this Audible version of ‘291’ does not disappoint!

I enjoyed this audio! If you enjoy detective stories this is for you. How can a car cause so much trouble! Narrator was awesome!

I’ve read this story several times and it keeps getting better!Narration by Steve Marvel was perfect. I was given this book by the author, narrator or publisher and have left an honest review.

If you are a Stephen King fan and are looking for a new author who writes similar stories, check out Susan May. Her books and stories are very reminiscent of Mr. King's works and are just as enjoyable!

Michael Chambers is a Rookie Cop at the ripe "old" age of 42. He comes from a long line of cops but fought against following in his father's footsteps. Instead, he has been working at security and other mind-numbing jobs.

As a Rookie, he is assigned to patrol areas that see a minimum of action and crime. Michael suspects that this is because of his age. But, the biggest problem he has with his job is that he keeps being assigned to drive vehicle #291. Said vehicle comes with a lot of mechanical problems and Michael begins to suspect that it might be haunted ala "Christine".

As the story progresses, we learn that #291 is a Memorial vehicle, dedicated to the memory of Frank Chester, who died in the line of duty while using this car. The detail in the story of Frank was wonderful and the author does a great job making the reader feel every emotion.

After Chambers becomes convinced that the car is haunted (or just out to get him personally), he decides to take matters into his own hands. Once again, the author does an amazing job describing Chambers' emotions and feelings as he puts his plan into action. And the ending? What an unexpected twist! I don't dare say more because each reader needs to experience this story with a fresh viewpoint.

Ms. May's books are wonderfully entertaining, well-written, and have great character development. Just be sure that you have plenty of time to start what you finish because you won't dare put this story down until you reach the end! The narrator, Steve Marvel, is perfect for this book. His pacing and voices really added a lot to my enjoyment of a story that I had previously read. If anything, I enjoyed it even more the second time around thanks to his performance! I was given the chance to listen to the audiobook version of this novella by the author and chose to review it.

I love this writer, but this novella has gone well over my expectations. It's a really fast-paced, tremendously engaging story. A masterly horror story, the kind that doesn't rely on gore or cheap shots to scare you.

I love the way in which, through its structure, lead us to believe that we know what really is going on, and then, in the end, shake us with a very unexpected ending. Really fabulous!

And Steve Marvel does a fantastic job narrating this story :)

I really enjoyed this little story. I hated the character in the way I believe was intended. A whiny narcissistic man who Steve Marvel brings to life. I would recommend for a short story. Maybe we could get more to go with this one?

This awesome little story was great to listen to while running errands! It kept me entertained throughout the day! Thanks!!!

I did not expect that ending and talk about being your own worst enemy. A bad attitude, dangerously dumb co-workers and a cursed car all combine into one giant fail. Combine the above factors with arrogance, a lack of restraint and overconfidence and you have a recipe for disaster, as Michael Chambers found out.

I enjoyed this short story very much. was 291 out to get him or not?