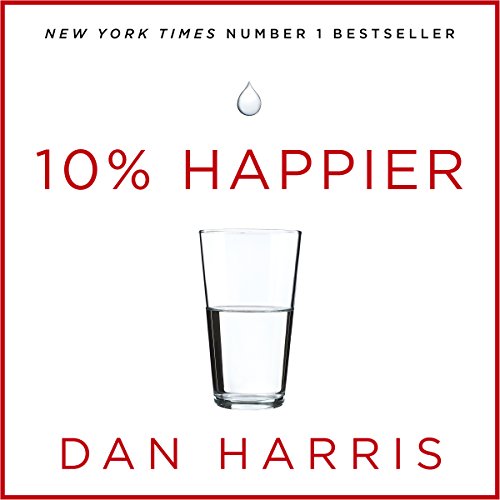 The perfect book for the spirituality sceptics who really do need meditation in their daily routine.

10% Happier is a spiritual book written for - and by - someone who would otherwise never listen to a spiritual book. It is both a deadly serious and seriously funny look at mindfulness and meditation as the next big public health revolution.

Dan Harris always believed the restless, relentless, impossible-to-satisfy voice in his head was one of his greatest assets. How else can you climb the ladder in an ultracompetitive field like TV news except through nonstop hand-wringing and hypervigilance?

For a while his strategy worked. Harris anchored national broadcasts, and he covered wars. Then he hit the brakes and had a full-blown panic attack live on the air. What happened next was completely unforeseen. Through a bizarre series of events - involving a disgraced evangelical pastor, a mysterious self-help guru and a fateful gift from his wife - Harris stumbled upon something that helped him tame the voice in his head: meditation.

At first he was deeply suspicious. He had long associated meditation with bearded swamis and unwashed hippies. But when confronted with mounting scientific evidence that just a few minutes a day can literally rewire the brain for focus, happiness, and reduced reactivity, Harris took a deep dive. He spent years mingling with scientists, executives and marines on the front lines of a quiet revolution that has the potential to reshape society. He became a daily meditator and even found himself on a 10-day silent meditation retreat, which was simultaneously the best and worst experience he'd ever had.

Harris' life was not transformed into a parade of rainbows and unicorns, but he did gain a passion for daily meditation. While the book itself is a narrative account of Dan's conversion amid the harried and decidedly non-Zen world of the newsroom, it concludes with a section for the novice on how to get started.

Too self-centric. Basically an autobiography full of the author's ego. Puts others down to elevate himself.

This book opened a new world to me.

Dan has managed to promote the idea and practice of meditation with the backing and running commentary of real thoughs, feelings and a highlight reel of real world issues. The point is to preservere and keep asking questions.

I will listen to this book again and again and keep practicing to practice meditation.

I was suggested this book by Hugh Jackman via his twitter feed, and I was not disappointed.

A true practical guide to finding a meditation style that suits you. Know that you aren't alone in your quest for inner peace, but also know there is not one straight path to it either.

This was absolutely useless, I have zero interest in this man's autobiography which is mostly what it is interwoven with his banal efforts to get involved with Mindfulness. Spare yourselves. Avoid at all cost

An autobiography disguised as self-help

Spoiler: he's referring to Buddhism, but doesn't actually talk about it until about 5 hours in. He spends more time talking about his earlier career and drug addiction, then he does anything that's actually helpful. The interesting bit is towards the end, his ten pillars.

I wouldn't have minded so much if this book was less about his worry around his receding hairline, but ultimately it's controlling vanity that's at the heart of this book.

He has some valid points towards the end and I commend his open-mindedness, I just wish he hadn't told his life story prior.

The honesty of the story allows the reader to see meditation as something achievable while managing expectations about the results of practice. My only criticism is that the performance sounds like you are being read news headlines(unsurprisingly), it can feel too intense.

Thank you Dan for sharing your story!

Workaholic meets Buddhism and shares this encounter and how it changed his life and happiness in a very light and funny way that does not miss any scientific explanations. The writing and narrating style is just awesome as you would expect it from a journalist.

To me this book has definitely motivated me to implement meditation to my life as well and I’m already 10% happier after a few days of trying. ;-)

I absolutely loved to follow Dan through his spirituality journey while he also shared his troubles and impediments from his „normal life“ - issues that most people should be able to refer to in one way or another.

Thank you Dan for having gone this way and having shared it in that enjoyable and enriching audiobook!
Say hello to your wife, the way you describe her makes me really like her, too :-)

Disrespectful and a waste of time

It is the story how the author found the “groundbreaking” idea that meditation and mindfulness are very helpful. He is just doing a review of the teachers he “test ran” and is speaking very disrespectful of some of the great spiritual teachers out there. If you don’t understand something, Mr., and are not grown up enough for it, no need to bash it. An absolute waste of time this book. I wish the author, of course, lots of success, health, and enlightenment on his way.