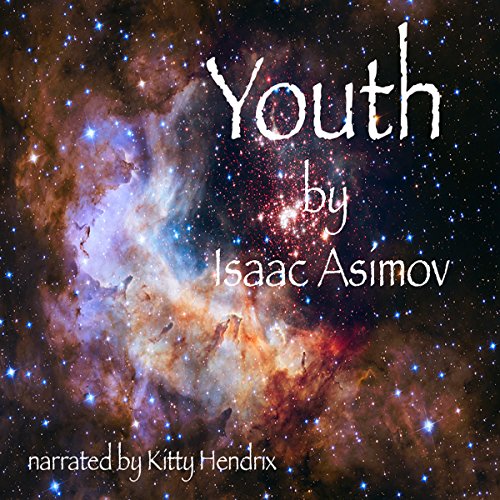 Slim is a boy whose astronomer father is visiting the country estate of an important industrialist. The industrialist's son, Red, has found two strange animals, and he enlists Slim in a plan to turn the animals into a circus act.

The astronomer, meanwhile, tells the industrialist that he has been in contact with space aliens who want to open up their world to interstellar trade. Their world needs help, the astronomer says; ever since the atomic wars that destroyed their old civilization, their world has been regressing. Unless something is done, their culture may face total collapse.

"Youth" by Isaac Asimov, first appeared in the May 1952 issue of Space Science Fiction and was reprinted in the 1955 collection The Martian Way and Other Stories. "Youth" is one of the rare Asimov stories with alien characters.

Youth Is a True Gift of SciFi by Isaac Asimov

Youth was such a great listen. Back in the days of my younger self I couldn't get enough science fiction. I don't know how this one escaped me. The story and characters were simply amazing. I loved the contrast between the kids Slim and Red, and the fathers, an astronomer and an industrialist whose characters were also an interesting contrast. One believing we could progress the world with the assistance of the "animals" and the other through growth of industry.

I think the story opens our eyes somewhat to the innocence of the children doing the right thing and feeding the animals they found without pretense or prejudice. They, as Isaac Asimov did, evoked the imagination by the boys wanting to join the circus. I just loved this story and it was told so beautifully by:

Kitty Hendrix whose vocal skills are bar none top-notch. She really brought this story full circle. The story was brilliant but her narration took it off the page and gave it color and life. She did a fabulous job with the children's voices. You could feel their excitement and wonderment. She did a wonderful, wonderful job with this book.

"This book was given to me for free at my request and I provided this voluntary review."

I read all of Asimov's novels as I was growing up and, somehow, this was the first short story of his that I listened to. What a fantastic treat! Asimov was truly a master of sci-fi and this short pretty successfully blew my mind in the way that really good sci-fi often does. I can't say too much more for fear of spoilers but this book is an excellent read and a compelling thought experiment. I would recommend 'Youth' to anyone who enjoys the sci-fi genre, and even those who don't! Kitty Hendrix did a fabulous job with narration. I would listen to this story again!

Long time fan of Asimov. Read all his books as a kid. Really enjoyed this classic story.

This audiobook was provided by the author, narrator, or publisher at no cost in exchange for an unbiased review.

It's Asimov, so you should know the drill. Saying too much beyond the synopsis would ruin what should be a ride of suspense and discovery (without feeling oppressively suspenseful, if that makes sense). Per usual, things are not always what they appear to be, but Asimov does a good job keeping you guessing just what IS out of place, while keeping the story moving forward.

Kitty Hendrix did an amazing job narrating. This is the second Asimov tale I've heard from her and it was excellent both times.

I was provided this audiobook free of charge in exchange for an unbiased review. I really do love both Asimov and Hendrix though :)

Youth is one of the great short stories by Isaac Asimov. Set in a future world after a global war. It is a great tale of with a fun ending worthy of the grand master of science fiction. As with many of his short stories this is a morale component to the story. Ms Hendrix does an amazing job narrating this short story and I hope she can bring to life more of Isaac Asimov's works as they hit the public domain in the future. The way she brings life to the boys is really endearing and sets the tone needed for the whole story. This was a joy to hear and I will be looking for more of Ms Hendrix performances when making Audible purchases based on this excellent performance. This book was given to me for free at my request and I provided this voluntary review

I like old Science Fiction and it is a short story. It gets right to the meat of without the bull.

Isaac Asimov was my first favorite author and still ranks among the top in my opinion. “Youth” by Isaac Asimov is just a beautiful reminder of why he was my first favorite. The short story is classic, great Asimov. It hearkens back to a simpler time of a boy’s youth while integrating science fiction and a nice twist ending. I highly recommend it. You can’t go wrong with this one.

Finally, this audio book was provided by the narrator at no cost in exchange for an honest review, courtesy of Audio Book Boom.

I truly love this one. The narration is top notch. The story is completely engrossing. It is a simple tale that I had never read before even though it has been around for some time. In its short story there are worlds of meaning. Two young boys and their discovery made me remember my own youth and how my friends and I viewed the world. The touching and surprising resolution of the story is amazing. I would give every category 10 stars of I could. I was voluntarily provided this free review copy audiobook by the author, narrator, or publisher.