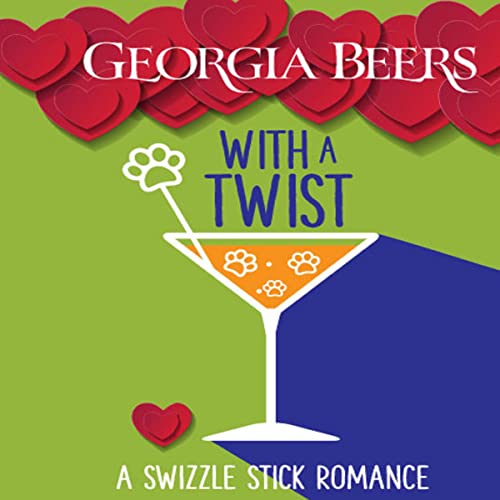 Amelia Martini’s favorite things are traveling, animals, and peanut butter. When she left her job to explore the world with her wife, she didn’t expect Tammy’s plans to include leaving her. Now, Amelia is starting over again and facing middle age alone. It’s a struggle, but she doesn’t want to be bitter forever.

Thirty-something Kirby Dupree loves life. Not always easy when you’ve lost as much as she has and carry as much sadness as she does. But she made a promise to always look for beauty, so she does her best...even when she has to squint to see it.

When Kirby’s job as an interior painter brings her into Amelia’s life, they don’t exactly hit it off. Amelia finds Kirby irritatingly cheerful, and Kirby thinks Amelia’s far too serious. Forced to work together, they start to see beyond their first impressions and prove opposites really do attract. But are they brave enough to go after the love they really want?

This ended up being my favorite in the series

I’m actually surprised that I found “With a Twist” to be my favorite in the series. I liked the first two books in the series, but I wasn’t very enamored with The Amelia character. Even so I was happy to see this book come up and I pounced on it. Turns out, book three is my fave!!
Georgia Beers is always an A+ for me so I’m always going to buy her books. I have yet to be disappointed!
AJ Ferraro isn’t the right narrator for this series. I do like her, but not so much in this series. This didn’t deter me, though, and I’m so glad it didn’t!!!
Great ending to a really fun series!

Not a fan of the narration

I really enjoy reading Georgia Beers books, and this series is great…but the narrator grates on my nerves with her cartoonish voice. It’s just out of place for the content, imo. I much prefer Abby Craden and Lori Prince.

The story was decent enough. The narration was a little confusing for me. The voices of the main characters seemed reversed and mismatched. The narrator did a good job with the performance. I just didn't feel the choices of the voices.

Great wrap up with the Martini cousins!

Although I will miss the story, I have to say I am not a fan of the reader. The voices of the characters grated to the point that I almost stopped listening. But…if you can get past this, the story is fantastic. Georgia Beers should be your go-to!

the story was good but I found the voices of the characters to be quite annoying.

The story was great, sweet and a great ending to the series. My complaint is that there were several pick ups that some didn’t edit out. Multiple starts to one sentence and random edits that seem to cut off the end of words. Just strange.

I want more of these please. it's sp wonderful and refreshing. more please and thanks

Another triumph for Ms Beers! This third installment was a wonderful book on its own, but also a nice wrap up for the previous two.

Characters who stay with you

I have loved Georgia Beers' writing since I read "Too Close To Touch" in 2006. I immediately read her two earlier books, also excellent. She is one of the authors whose characters and stories feel so real and alive that I reread and re-listen to her books. The Martini cousins are so entrancing that there is only one question. How long do I have to wait to re-listen to this series. Georgia, Thank you for helping me and my partner get through the pandemic's isolation with your enchanting, complex, heart warming people. Connie H

I loved this book, it is the 3rd in this list, of Martini’s and it was dealing with some important topics, age gap, menopause, loss in the family. I always loved AJ Ferraro’s narration, but this time I didn’t like the voice she chose for the younger MC, Kirby had a voice af a 12 yo and I didn’t like it.