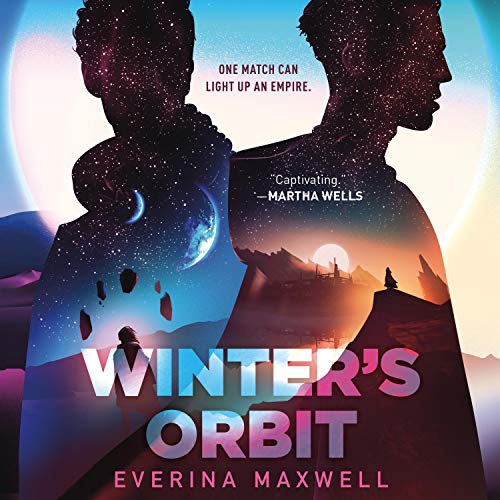 "Narrator Raphael Corkhill deftly navigates a range of situations and voices in this novel, a blend of romance, mystery, and space opera.... A satisfying love story with plenty of political machinations, this audiobook will please fans of romance and sci-fi alike." (AudioFile magazine)

A famously disappointing minor royal and the Emperor's least favorite grandchild, Prince Kiem is summoned before the Emperor and commanded to renew the empire's bonds with its newest vassal planet. The prince must marry Count Jainan, the recent widower of another royal prince of the empire.

But Jainan suspects his late husband’s death was no accident. And Prince Kiem discovers Jainan is a suspect himself. But broken bonds between the Empire and its vassal planets leaves the entire empire vulnerable, so together they must prove that their union is strong while uncovering a possible conspiracy.

Their failure will be the end of the empire.

"Everina Maxwell's writing has everything you could ask: impossible choices, divided loyalties, dry wit, and operatic struggle with bureaucracy. I don't know how she's managed to write a book that's simultaneously an elegant comedy of manners, a charming slow-burn romance, and an adventure in space politics, but whatever her secret, I'm wildly envious." (A. K. Larkwood, author of The Unspoken Name)

"Everina Maxwell is brilliant at creating atmosphere and drama. Her light touch and considering eye are applied thoughtfully, warmly, and yet without mercy to the failures of an interstellar bureaucracy and the people who both make those failures happen; to the difficulties of diplomatic ties between planets that rely on personal ties between human beings; to the ways people try to get what they want from each other, and the ways they fail to understand each other. The combination of sweeping space opera backdrop and real human drama is as compelling as it comes." (Emily Tesh, author of Silver in the Wood)

If you're an avid MM Adult Romance reader, I'm here to tell you this book isn't romance-centered. This book is more about mystery and political intrigue with romance developing and resulting from two people arranged to be married. It should probably have content warning too: flashbacks and trauma from domestic abuse.

So, I'm not a big sci-fi fan, I don't read much of it. I'm more of a contemporary, urban fantasy or paranormal romance kind of girl. With that being said, this book kept me engaged for over 15 hours!

Prince Kiem, a hot mess of a minor Iskat royalty with a pure heart. Seriously, the guy is like a walking sunshine who makes you think he can probably bend things his way just from the sheer force of his optimism. He's had a disastrous publicity record, but nothing too bad, just youthful exuberance and bad choices. Then his mind was blown and life forever changed when the Emperor told him he is set to marry Count Jainan of Thea, a widower who just lost his husband, Prince Tom. Prince Tom is a cousin of Prince Kiem. * cue dramatic gasps *

There's a treaty and their marriage will seal the deal and all that arranged marriage details. Both bound by duty, these two wed with personal baggage and issues, and the story unfolds from there.

The world building in this story was great and very detailed. The character development in this was really well done. The process of Kiem and Jainan's reluctant partnership, to friendship, then to blossoming to love, was worth the slow burn. Because it really is a slow burn and a lot of failure to communicate, despite Prince Kiem's numerous attempts of real talk.

While Prince Kiem and Count Jainan are grown adults and there's romance, this one is not steamy at all. There's a kiss, some affectionate touches but that's about it.

It was Prince Kiem who kept me engaged and listening. His naiveté, his drive to do the right thing makes him so precious and endearing. Count Jainan, on the other hand, is a very complex character. He's a trained diplomat, very duty and honor-bound but he's fighting his own demons. These two fought hard for their HEA, and after all that they went through, they sure deserve it!

The narrator did a wonderful job with his storytelling! All in all, this book is engaging, plot is well done, characters are multi faceted. Worth the credit!

I absolutely adored this book! Funny and sweet at times, but I can’t remember the last time a book kept me in such a high state of anxiety for so long. A well-developed world, an intriguing conspiracy, compelling protagonists, and the narrator was great, too!

Engaging story of two men, Kiem the public disaster & Jainan the publicity shy grieving widower, who are paired up for diplomacy and stumble into a diplomatic nightmare from the jump. Kiem has to increase his responsibilities while Jainan hopes his efforts to maintain a treaty aren’t in vain. The plot unfolds at a good clip and includes fighting a bear, so it’s entertaining even if forensic accounting isn’t your jam. Secondary characters are easy to picture even when bios are brief, and have character development.

Kiem uses his noble rank for good, but not always legally, a favorite ploy for me. My biggest quibble was him pulling a “you’re not the boss of me” stunt to delay an imperial summons. Um, yes, that’s the thing about emperors - they ARE the boss of you. That’s why representative government is healthier long term than hoping your dictator is benevolent.

Worldbuilding: A good deal went into setting up gender indicators, including non-binary folks. I didn’t find the indicators necessary for the plot, so maybe it was scene setting or prep for the next book, or just a way to make non-cis readers feel loved too. Making sure judgement wasn’t attached to gender or sexuality made for pleasant reading. It looks like there’s more to explore around gender and a certain mined mineral too, but the mineral plays a bigger role in this plot. The space travel, as in most sci fi, is greatly sped up, but most action happens planetside, in a snowy winter.

Content Warning: for prior spousal abuse, mostly deduced by an alert reader, with some flashbacks giving minor details. Kiem is kind, which is never in doubt to the reader.

Steam: Low, YA level. Aside from an M/M kiss or two, desperate hand holding is all that makes it on page. There is an off page encounter. Consent is done well.

Narration. The narrator is clear. He picked accents for the main characters making it easy to distinguish them. Although sometimes I lost track of whose POV was being read when they weren’t speaking, usually I figured it out because the characters are portrayed with very different thoughts.

This is not great science fiction and certainly the politics in here is laughable. But it is a sweet and charming romance that likely will keep you fully invested until the end. There is plenty of action and adventure but the focus never really swerves from the romance, which I think many readers will appreciate. The writing is easy to follow and it has a satisfying ending.

Story: Prince Kiam of Iskat and Count Jainen of Thea are forced into a quick political marriage after the death of Jainen's previous husband (Kiam's cousin). Iskat rules a small system of planets but it is part of a larger Collective that spans the galaxy. A renewed peace treaty with the Collective will ensure that their small empire remains protected. But that peace treaty is in jeopardy due to unrest at Thea that Jainen cannot control. If Jainen and Kiam cannot provide proof of unity among Thea and Iskat , the treaty is off and Iskat's empire will be fair game to larger empires.

The usual romance tropes are here: misunderstandings, lack of communication, secret attraction. The author does a good job of not letting these cliches become too annoying; it can be so frustrating to the reader to know that all either main character has to do is just communicate. Admittedly, it did wear on me at times.

Both Kiam and Jainen have their own personal demons to fight: Kiam is considered the wastrel royalty and Jainen feels he has failed his one duty to help his planet. Kiam is freewheeling and outgoing, Jainen is compressed and high strung. Kiam feels he has to keep his distance from Jainen who must be grieving the death of his husband and Jainen takes Kiam's reticence and distance as rejection and failure.

There are several side characters but the story closely follows the POVs of Jainen and Kiam. Both do feel uniquely crafted and separate from each other. Neither feel too much like an overidealized hero, though neither is very deep. Author Maxwell gives them enough foibles to give them enough nuance to be interesting. Of course, both are deeply good people trying their best to do right.

The plot is kind of silly and honestly not very realistic. But I think those looking for a nice escapist read won't mind too much and appreciate that at least the author put in an overarching story with enough mystery and adventure to make for a fun read.

I listened to the Audible version and had mixed feelings on the narration. Kiam sounded like goofy cliche English nobility while Jainen sounded like a 45 year old man with a middle Eastern accent. It was very odd. But this was the perfect book to listen to on Audible - you won't get lost if distracted and it is very easy to follow.

It’s been a long time since I’ve enjoyed a book quite as much and given that I listen to around 5 books a week that’s saying something. The characters in this book are so likable. The prince is the most wonderful and kind hearted person while is counterpart makes your heart ache for him. His insecurities and sense of self worth are totally relatable. The paces of this book was good. It took me to the edge of frustration and right when I was starting to get annoyed it would resolve the issue. It just kept giving as a novel. Totally outstanding. I also thought the narration was excellent. I can’t wait to listen to this again soon!!!

Side note if you’re expecting this to have graphic sex scene you might want to look elsewhere. This boarders on YA but with adult protagonists.

I personally dislike narration with too strong accents so the narrators definitely detracted from my enjoyment a bit, but my overall dissatisfaction was with the story and characters. As LGBT scifi it was ok but as scifi in general it was subpar and lacking for me.

Already a near perfect book, but then it is brought to life so PERFECTLY in narration. Possibly my new favorite audiobook ever.

If you want a massive LGBTQ+ Science Fiction universes, political intrigue, character driven story-lines, and unpredictable twists, then Winter's Orbit may be the novel for you. I truly hope Everina Maxwell will continue this story into a series and explore the characters further. We only explored Jainan in book 1, but there are so many things about Prince Kiem that we could learn about or his aide to camp. The universe is uniquely set up for epic Sci-Fi, I can easily see a series of adventures for all these characters from internal strife to revolutionaries/terrorist radical groups to clandestine subterfuge from other major interstellar powers as the story hinted, along with more details about the Resolution and its mysterious Auditors.

Winter's Orbit delivered a marvelous science fiction story, a very compelling character story about emotional abuse from a spouse and his recovery, a murder mystery with political intrigue, and introduced a wonderful cast of characters.

I love the couple in this story! Although there were a few times I wish I could hit them over the head and tell them to just talk to each other!!!!