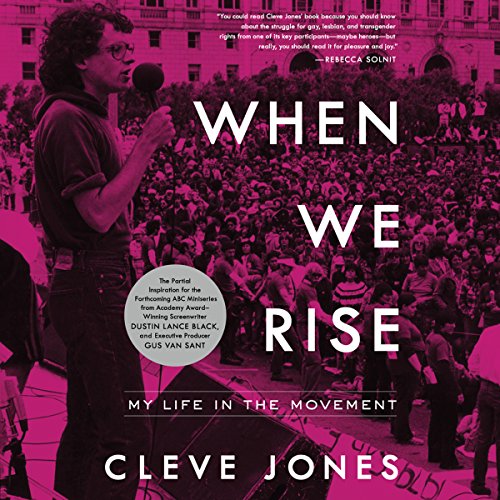 From longtime activist Cleve Jones, here is a sweeping, beautifully written memoir about a full and remarkable American life. Jones brings to life the magnetic spell cast by 1970s San Francisco, the drama and heartbreak of the AIDS crisis and the vibrant generation of gay men lost to it, and his activist work on labor, immigration, and gay rights, which continues today.

Born in 1954, Cleve Jones was among the last generation of gay Americans who grew up wondering if there were others out there like himself. There were. As did thousands of young gay people, Jones moved to San Francisco in the early '70s, nearly penniless, finding a city electrified by progressive politics and sexual liberation. Jones met lovers, developed intense friendships, and found his calling in "the movement".

Jones dove into politics and activism, taking an internship in the office of San Francisco Supervisor Harvey Milk, who became Jones' mentor before his murder in 1978. With the advent of the AIDS crisis in the early '80s, Jones emerged as one of the gay community's most outspoken leaders. He cofounded the San Francisco AIDS Foundation and later the AIDS Memorial Quilt, one of the largest public art projects in history.

"Cleve Jones is a history buff who has himself become part of history. He has been at the epicenter of the LGBT movement for over 45 years. Now, in When We Rise, Cleve takes us along on his personal journey in the fight for equal rights - a journey filled with humor, sadness, love and ultimately profound change." (Rob Reiner)
"Some people witness history; other actually make it happen. Cleve Jones, by planting himself boldly in the eye of the storm, has succeeded brilliantly at doing both." (Armistead Maupin, New York Times best-selling author of the Tales of the City series)
"Enlightening.... Unsparing.... Powerful." ( Booklist)

I purchased the Audible version and have listened to it on my daily walks. From the second chapter I got sad knowing that I would eventually come to the ending and wouldn't be able to hear it for the first time ever again. Today, that day came and i'm missing it already. I would recommend the audio version as Mr. Jones is an engaging speaker and it's always great to hear someone reading their own work. It made my daily (sometimes monotonous) walks fly by.

I listened to Cleve's interview on Fresh Air w/ T. Gross. I was so captivated I then listened to Cleve's memoir. I was not disappointed. Many of the events happened in my childhood and were brought into full color and texture by Cleve's writing. The depth of the struggles and the remarkable courage to confront them is inspiring!

A heart-rending historical and personal account of the gay rights movement and the AIDS crisis. This book is essential reading for any involved in politics or activism of any kind.

This is a memoir...not a history of the movement. Overall, it was good, especially the parts about the origins of the rainbow flag, the quilt, and the making of the movie Milk.

When We Rise is a heartwarming reflection of one mans part of the movement that gave many freedoms to those fortunate today. It shows how the pendulum swings and continues to do so. The authors tale of the aids epidemic is touching and sad. So many wonderful souls lost during a very scary time in the world. I highly recommend this book to all who want to know a bit about those that stood up for equality and justice so that some may have freedom today. It also shows that the fight is not over. The fight continues and others can model what Cleve and others have done. Bravo.

even better than reading it yourself

I read the book originally but nothing compares to hearing it from Cleve Jones himself.

So many things we owe thanks for. This book shares many of those things. I am a better person for having listened. If you are interested in where we started and how we got here, look no further! 🏳️‍🌈

Required reading for every activist!

This memoir is at once both magnificently beautiful and absolutely heartbreaking.

It begins with a colorful and fascinating recounting of his youth in San Francisco and his fearless and eye-opening travels abroad. I believe that he lived more life in his 20s than most of us will in an entire lifetime.

Cleve then goes on to paint a picture of the terrible fear and devastation that AIDS brought to the community. It is impossible to read this section without tears.

The post-AIDS crisis section is markedly more optimistic and provides a quick look at the political progress of the last decade or so.

I have been an LGBTQ activist for over a decade, and I still learned so much from this book! Cleve Jones is a living civil rights legend, and I hung on every word of this brilliant memoir.

invaluable glimpse into the generation before mine

I came of age in the early 90s and almost immediately joined Queer Nation and then ACT UP (Golden Gate). I remember being acutely aware that we were losing a generation of giants to AIDS. I am so grateful for Cleve's work and his book. I remember not understanding the point of the AIDS quilt... I was so wrong. I was so involved in militant activism, that it never occurred to me that grandmothers and other family members needed a way to make our struggles relevant to them. Cleve's descriptions of both San Francisco's Castro district and the sheer thrill of mass protests took me back and flooded me with memories of my own. One of my favorites being the time we held a memorial for Sister X and shut down an intersection in the Castro with drums, and queens, and fellow activists (and nuns, of course!) This is such an important work and all of us who came of age after the 80s should read this and know a sliver of the history and people who came before us, who fought for the rights we get to take for granted today.

this memoir had me imagining i was in the fight even though it was before my time. i laughed, i cried, i rejoiced. thank you Cleve for being you!