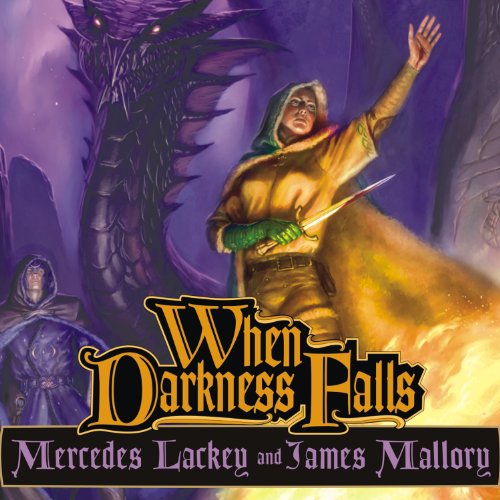 A great working of Wild Magic and High Magic strikes at the heart of the Demon Queen's plots, but the human city, the Golden City of the Bells, falls farther under her sway with each day that passes. And without the City's High Magicians, the Wild Magicians, the Elven Army, and all their allies will surely fall before the onslaught of the Demon Queen's malignant warriors. But not all hope is lost. The Light's young mages, tempered by war, grow ever more powerful. High Mage Cilarnen learns an ancient secret that can make him, for a brief, white-hot time, the greatest mage in the world---unless it kills him. Jermayan, the first Elf-Mage in centuries, has linked with the dragon Ancaladar and rediscovered the swift-as-thought powers of Elven magic, which can reshape mountains and summon lightning from clear skies. Knight-Mage Kellen has molded his troops and the Unicorn Knights into a deadly fighting force. Soon the Elven King and his Commanders put Kellen's magical gifts to their greatest test, in the final battle between the Elves, the humans, and the Demons.

When I first began listening to this series I wasn't sure I liked it .... It's a good story line that is well thought out and overall I was entertained ... but it's not a story that will task or engage the reader / listener much. Doesn't compete with other top notch series.

I ended up purchasing / listening to all 3 books in the series, however I don't believe I'll ever call this one of my favorites.

1- Overall few surprises or ah ha! moments ... somewhat predictable
2- Character development seems rushed pretty much across the board
3- Narration took some getting used do ... I couldn't decide if it is the way the book is written or the narrators style but I often felt as if I was sitting in a 2nd grade class

I thoroughly enjoyed this trilogy!

The narration is SUPERB!! The myriad characters each have a life and vitality of their own .... Just superb!!!

The morality of the story makes it a must read for the pre and early-teen reader ... A modern Eosops Fables for today's youth.

this is one of the the greatest storys ever

I loved this story, beginning to end I couldn't stop listening. can't wait to check out more from the authors

this book is a thoughtful piece of work that makes play of many details yo build an epic plot.

If you could sum up When Darkness Falls in three words, what would they be?

a fine ending to a great trillogy

i found her narration easy to listen and smooth to follow

i binged through all three and sorry it is over...i will miss them

I thought that this last book was a fantastic finish to the series. It made me laugh, it made me cry (awkwardly in the middle of work) and I don't really ask much more than that from my books.

I was actually a little disappointed with this conclusion. they rushed the important parts and dragged out the small details. the epic final battle was over in a few sentences where we got to hear long descriptions about clothes and whatnot. While I enjoyed the trilogy overall very much this final installment seemed as though the authors wanted to just get it over with.

Predictable. So much more could have been done with this story. I didn't like how some characters that could have gotten great depth were just cursory. Meh.

The overall book is enjoyable. It does get quite repetitive. I like the characters more than the actual story as they are well developed. The audio book helps with understand the pronunciation of the overcomplicated names of places and people.

Great ending to a great series!

This wrapped everything up nicely. Although parts of the series were slow, the overall story was well worth listening too. This book was rather enjoyable especially the parts with major plot twists. (I wont spoil anything)