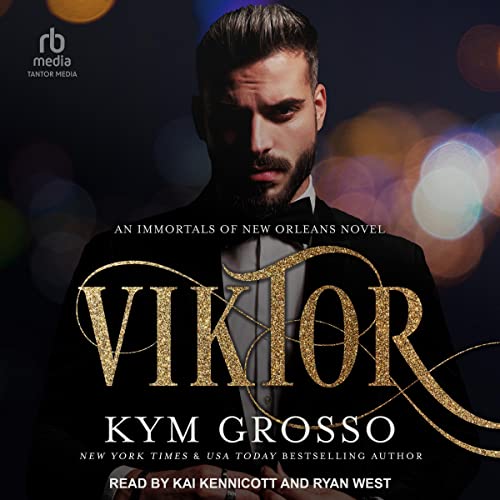 Ancient vampire, Viktor Christianson, thrived for thousands of years without love. Enjoying the finer things in life, the international playboy embraced the essence of his immortal existence. But after he rescues a beautiful human from a bloodthirsty predator, he discovers she's awakened the humanity he thought he'd long forgotten. Captivated by her unique energy, Viktor vows to protect her and soon realizes she's the key to his future.

When art curator Waverly LaFleur first encounters the lethal stranger, her instinct is to run far, far away. Although she's hidden her psychic visions for years, premonitions morph into reality, and she begins to attract dark entities she could never imagine existed. When the debonair vampire saves her life, she cannot deny temptation, spiraling into the seductive ancient's world.

While seeking the truth about the evil that's entered their lives, Viktor unearths the dark truth of his lineage, suspecting his nemesis is alive. He must choose wisely or become everything he's always hated. If they survive, will he come to terms with his humanity and bond with a human or leave her forever, abandoning love?

Ive read them all and they just get better and better. Narration was perfect. I can’t wait for the next book.

This is why I love the Immortals of New Orleans. Viktor checked all my boxes. The one complaint I have is the difference in reading speed between the two narrators. The female reads it at a much faster pace than the male narrator. Not a huge deal but I did have to slow it down when the female spoke. Maybe the male narrator was slower. I don’t know. I generally play it at 1.3 to 1.5 speed. For that speed the male was fine but the female was way to fast. Just my 2 cents. Anyways, it was a great book. Five Stars across the board on this one!
⭐️⭐️⭐️⭐️⭐️

Can’t wait for the next book. I absolutely love this series, please keep them coming.

I love the series, however - the female narrator doesn't do the male characters justice, unfortunately!

One of my favorite series

The narrators really brought this book to life. I enjoyed listening to it. Kim Grosso writes her stories so well and the narrators she uses reflect that.

Another great book from Grosso.

I loved this arty vamp. This book was a bit different from the other (which i enjoyed)
by having the main character know what she wants and accepting her feelings for our lead vamp quickly.
There was no slow burn and this allowed the story telling to be more focused on the problems they were
trying solve.
With those praises being said...
I waited for the Audible version and was bit disappointed with the performance. i enjoy Ryan West as a narrator
but this was a very lack luster version of his talent. I had no issues Kai Kennocitt, she did well.
I cant wait to see who gets a book next, our Hybrid Vamp/Wolf, our Rogue Wolf or another Brother Ancient Vamp.

I have loved this series from the very beginning, however, the addition of the female narrator has not been a positive change. Normally, I prefer when there is both a female and male narrator, unfortunately, the performance of Kai, in this book, doesn’t work. Ryan West can perform Female voices convincingly and his intensity has been what has made the audio version of this series, spectacular. Kai just does not fit the paranormal well. She has made the Heroines come across as weak; too unsure and indecisive. It was such a disappointment that I recommend reading rather than listening to this book.

The plot was enjoyable but I struggled to finish this book over three days when I would have normally devoured a book from this series in one.

This is one of my favorite series and I absolutely love Ryan West! So glad he is back! Viktor was in touch with his human side more than he realized. After all he did help a little old lady in her apartment. I’m glad he found his mate now I can’t wait to see what happens with the stubborn rouge wolf. This should be good.

very enjoyable audiobook. recommend the narration by Ryan and Kai was amazing loved they way the brought the story to life

Love the narration by Ryan West and Kai
Kennicott!

I love Author Kym Grosso she never disappoints. Vikitor is absolutely full of angst, chemistry and incredible intrigue. As always I was left on the edge of my seat and finished this in one day. Highly recommend you listen to this you will not put it down until you finish.

I would give it 10 stars if I could