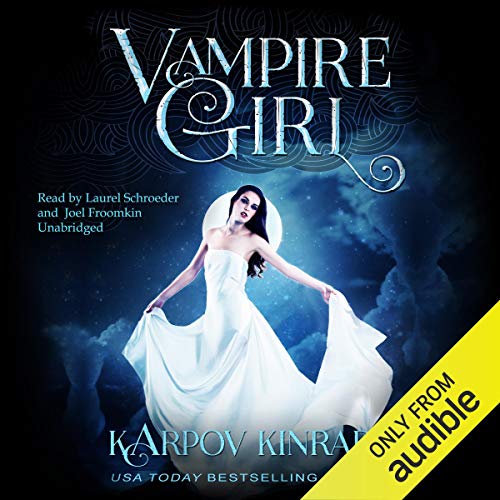 Experience the USA Today best-selling novel taking the world by storm! With over 3000 world-wide five-star reviews, Vampire Girl puts a new twist on an old tale. For fans of Twilight, A Shade of Vampire, and Outlander, comes a new series that will suck you in and leave you wanting more.

You think it's safe to walk alone at night. It's not.

You think the only threat is other humans. It's not.

And I'm about to become one of them.

My name is Arianna Spero. I was an ordinary girl living an ordinary life until my mother lapsed into a coma. Now, I am her only hope. She made a deal with the devil, and on my 18th birthday he came to collect. But there's a way to save her. There's something the princes of hell want more than my mother.

So I signed my soul away and promised to pick a prince to marry. I would take the blood oath, become one of them, and give them an heir. I would become a princess of hell, and my mother would live.

But the princes are keeping secrets from me.

Secrets that could shatter everything.

Scroll up and click the buy button now to uncover the truth...

that was an amaizing book . keeped me on my toes . definatly did not expect that ending 😲

Where does Vampire Girl rank among all the audiobooks you’ve listened to so far?

I'd rank in the top of my list. I really loved the story and the turns.

I liked the world that it has created. The difference in the characters.

The end of book 1 was unexpected and of course I had to immediately order book 2.

I didn't like the males narration of the women voice. The female narrator did a better job of the male character's voice.

I found this story to be an attempt to shove every fantasy trope/buzzword into one story. Fae, magic-wielders, demons, vampires, werewolves, princes of Hell, the 7 deadly sins are somehow all mashed together as one or two kinds of being. It's an okay storyline with a chosen one, prophesy, competition over a lady who must-accept-her-fate/fated-mates/love-triangle/reverse-harem kind of thing with some action and adventure, but I just found it incredibly generic, and even lost track of characters as they all kind of run together. The characters too are very one-dimensional.
The narration is okay -- I liked the changing male/female narrators for changing POV, but it happens so rarely -- and the accents aren't terrible but not great. I again found it hard to distinguish between individual character voices.
I'll probably give book 2 a shot to see if it improves from here, but don't have high expectations for much unique or engaging story or narration, I'm afraid.
If you're looking for a short, shallow, standard YA fantasy incorporating ALL the tropes that you can listen to without really listening to, this is for you.

I am shocked at how much I enjoyed this book. I couldn't put it down, finished in one sitting. I can't wait to listen to the second. It's an awesome story full of magic, fae, vampires, etc. and quite a different take on the genre. The world building is amazing. I absolutely loved it and will download the next one as soon as I'm done writing this review. Laurel Schroeder and Joel Froomkin did a fantastic job with the narration. Definitely worth a listen!

The story has a cliffhanger ending, which I hate and you have to buy the next book to get more of the story. I will not be buying the next book. It most likely ends in another cliffhanger and I'd rather spend my time on a story I actually care about. The female narrator did a great job, but the male narrator made me cringe, he was so bad. He ruins the sections he reads.

i loved it
its sweet and romantic. was sad dyson passed trying to help someone. I like Arie and fin together.

very addictive. I couldn't put it down. story line has lots of twist and turns!! awesome narration as well

very enjoyable, the storyline is engaging and interesting the narrators do a good job keeping me engaged

This is a good start to the series. I wasn't sure what to expect since the author was new to me, but I was pleasantly surprised. It's a new twist on this genre from what I've read/listened to in the past. I'm looking forward to what book 2 brings.

I love this book. I enjoyed this book. Well written. It was exciting, I felt like I was in the room watching and listening. Can’t wait for the next one.
Marsha Rickards

The book was very slow. It didn't pick up or get much of a plot until the very last chapter and epilogue, so that was disappointing. Ari's character is also inconsistent and a mismatch of different personalities--most unbelievable or relatable. I couldn't connect with her at all. Although the premise of Hell was interesting, I felt like we didn't get enough description of it, either. There was a lot of repetition and weird coincidences (like Pete suddenly knowing about the demon mark)... Again, not believable. Also, the language the author used was too formal at times. Especially for a modern-day young woman.

As for the narrators, the female's voice I didn't mind too much. She didn't have much range though. All the brothers sounded similar. It was hard to tell them apart. And the Fae were Scottish. But the male's voice was torturous. I felt like Patrick Stewart was reading to me (and with the sexier parts, it got weird). I didn't feel like he matched at all.

I don't think I'll be reading more of this series. Didn't do it for me.