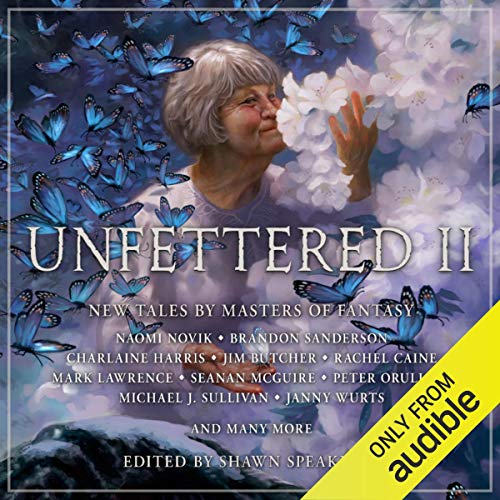 Life can kick us when we are down.

In Shawn Speakman's case, he is fighting back.

Lacking health insurance and diagnosed with Hodgkin's lymphoma in 2011, Speakman beat the disease as well as the massive medical debt he amassed from its treatment. He did this by publishing Unfettered, an anthology featuring short stories donated by some of the best science fiction and fantasy writers working today.

The fight will not stop there. In an effort to pay forward the aid he received - and to memorialize his mother who passed away from stomach cancer in early 2016 - Speakman has again collaborated with celebrated genre authors to publish Unfettered II. All proceeds from the anthology will either help eliminate medical debt for other authors or be donated to cancer research hubs around the world.

Twenty original new tales comprise this amazing collection and, as the title suggests, the writers were again free to contribute whatever they wished.

Here is the lineup for Unfettered II:

With the help of New York Times best-selling authors as well as talented newcomers, Speakman has taken the platform Unfettered created to not only confront medical debt but to support the battle against one of our gravest illnesses. Unfettered II is a fantastic sequel anthology, but it is more than that; it is proof that we are stronger together than we are apart.

After all, isn't that what genre fiction is all about?

This is a very nice fantasy anthology.

Speakman has been a very solid job collecting works from a number of accomplished authors. As is often the case the big names are the best. Here, Brandon Sanderson's excerpt from The Stormlight Archive "The Thrill" is the real standout if you are already acquainted with his other work.
"Day One" by Jim Butcher featuring a short story about Butters from The Dresden Files is a must read or listen to any fan of Dresden, Urban fantasy, or Gaming.

I think the Hidden Gem (so to speak) here is "And Men Will Mine the Mountain for Our Souls" by Seanan McGuire. I've never read what I can only describe as a first person introspective by a dragon before. But now that I have I can't imagine anybody could do better.

Not every short story in this or any Anthology is a home run. that said I think there's enough here to satisfy most people. And it's very well produced with a great cast. Even Nick Podell makes an appearance although James Marsters is more noticeably absent.

This collection was incredibly diverse with a few stories unfinished, but the best stories made the whole purchase worth it! Great way to find a new favorite author or voice actor.

This book has a thread of sadness throughout it's various stories, but it stands as a wonderful collection of beautiful.

A motley collection of high fantasy and science fiction that stays modern and fresh. I hope Speakman doesn't need another tragedy in his life to give us book 3.

More good than bad on the whole

Ratings for each story individually;

Castle Coeurlieu by Naomi Novik 4 stars
A Slow Kill by Peter Orullian 4 stars
And Men Will Mine the Mountain for Our Souls by Seanan McGuire 1 star
Day One by Jim Butcher 5 stars
Brightwine in the Garden of Tsitsian Village by Bradley P. Beaulieu 5 stars
Aokigahara by John A. Pitts 2 stars
The Decoy by Janny Wurts 5 stars
The King’s Despatcher by David Farland 4 stars
Figures by Rachel Caine 1 star
The Red-Rimmed Eyes of Tóu Maˇ by Aidan Moher 3 stars
Magic Beans by Django Wexler 1 star
The Hedgewitch by Sarah Beth Durst 4 stars
Victim with a Capital V by Scott Sigler 2 stars
A Duel of Evils by Anthony Ryan 3 stars
The Raven by Erin Lindsey 4 stars
Bulletproof by Mark Lawrence 2 stars
The Gunnnie by Charlaine Harris 3 stars
Little Wren and the Big Forest by Michael J. Sullivan 2 stars
The Thrill by Brandon Sanderson 2 stars
The Last Flowers of the Spring Witch by Shawn Speakman 4 stars

They can't all be gold but they were all at least good. There were a few gems. worth a credit since at least there's a lot to listen to.

Great collection of short stories and narrators from some of my favorite authors! And what a fantastic cause to support by all these authors.

A few stories detracted from the entire collection

Many of the short stories were amazing. Unfortunately a few of them were too detailed in their description of sex scenes. I did not purchase this book for graphic details. If language and slightly explicit scenes do not make you uncomfortable then you might really enjoy the stories.

some great some meh

like any collection of short stories, some stand out a lot more than others. the top highlight for me was Magic Beans. I am also a Michael J. fan and a Brandon Sanderson although the story in this from him "The thrill" were chapters out of Oathbringer and not original

An anthology of sci-fi short stories, what a great idea! But whose stupid idea was it to include, halfway through, an explicit sex scene? Why can't I just get good stories without an author descending to the gutter? Sleezy authors apparently do not have the creativity or intellect to craft quality story lines without publishing to the world their every sexual fantasy. And how do we readers who prefer wholesome entertainment get a warning so that we don't get dragged into the gutter too?

To be fair, the first 12 stories in the anthology were not smutty, although several were riddled with excessive profanity (another indication of weak intellect in the author). I don't know about the others, because I have now learned that the editor of the anthology cannot be trusted.