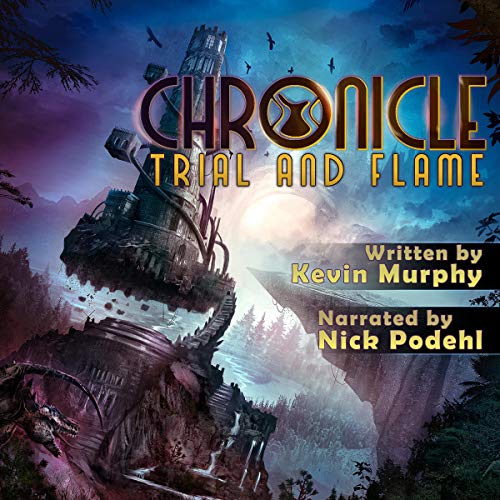 Games are an escape?

The fickle whims of the gods force Dakkon to take that sentiment literally. The announcement of some grand tournament doesn’t equate to glory when it's thrust upon him and threatens the life of his closest friend.

In the virtual world called Chronicle anyone could be hunting them. To keep his unusual friend safe, Dakkon goes on the run.

But - why not use laying low to your advantage? Staying off the grid might bring opportunity with the right amount of luck.

Avoiding well-traveled roads has its upsides. It’s the trips to unusual places where parties can collect unlikely prizes.

What secrets will Dakkon’s group uncover when they, too, are trying not to be to be discovered? Just how worried should they be?

I so wish it wasn't a flop

I hoped and prayed for the second book to build on what it for well in the first book. I really did.

It didn't help. Not only does it barley even touch skills and magic, but the side characters are often rushing his practice sessions like it's not important. He STILL never looks up any real world science to use with his thermomancy. Meteorology, thermodynamics, I'm positive there is something electrical you can do with rapidly heating and cooling wire. Point is he's an idiot who is dissatisfied with with abilities he almost always takes at face value. If he didn't HAVE to he never would have developed Thermomancy AT ALL. The writer literally had to force the MC to develop a useful class because the MC couldn't figure that out himself.

Aside from all that he picks Pyromancy.. Bleh, he could have done soooo much more interesting things with wind magic but noooo. He picked it because someone else, with a unique class, uses fire so he thought it was cool and picked it... What? Not only that he pays through the ass for the lesson. The writer HAD to do that so the MC would stick to it long enough to get the "special" exp boost for the class.

The writer explains all this away with his massive luck Stat, but it just isn't cutting it for me. There is so much potential in the magic system, but the MC's mindset makes it worthless.

It you listen to the first and last chapter that's pretty much all you need to know for the next book.

The First Book Was Better

The whole book feels like a side quest,
There's a lot of travelling almost 4 hours of it. (I may be wrong but that's what it felt like)
Nothing really happened with the trial of the gods stuff from the end of book 1. (which sucks)
The fights senses were good but there wasn't a lot them. (that sucked as well)

I enjoyed dakkon's idiot savant ways of getting through his problems
And how the luck stat plays a big part in his success
I love the spell level grinding, (wish there was more of it)
And mixing spell together was really dope as well.
The ending was really really good it just sucks that all the good stuff happened at the end tho.
Nick podehl was phenomenal as always.

Overall most of the book felt like filler and how the first book ended I was little disappointed with this one.
It's not bad I think people will still like it but l was so excited for this it sucks that it fell short for me.

This is overall a way better than average LitRPG book. I'm gathering the author is going somewhere with the main character. However, he is leaving a lot left behind. The MC has 3 classes in this book and generally realizes what he is doing. I'm just saddened by the unused potential.

Dakcon, the MC, is back with his friends travelling and solving puzzles. There is a lot to it and he grows in power. There is a lot of unused potential in science and engineering the MC could do with his power. I thought the author would explore that in interesting ways. which he does, just not to the full potential.

It is fun to watch the MC develop interesting and varied party support abilities. It is nice to see he cannot be a one man band.

Overall a good 2nd book of a series. I'll be looking forward to the 3rd.

better then the lart

This book improves on the last book ten fold well worth the read. great characters

First off, Nick Podehl is brilliant as always with his audio narration and in many ways allowed me to get through the book.

The main concept of the main character having this edge master class is pretty cool. This attribute seems pretty original to me and gives the main character an "edge" (sorry for the pun) that nobody else has but doesn't yet seem too overpowered. It also makes for some interesting character development, particularly in the LitRPG genre.

The story/plot of this one was pretty disappointing. I think the last one was better because it was more focused on the main character. I think the problem I have with the story is that while the main character is fairly well developed, his party, with whom he spends a majority of the book, amount to a bunch of caricatures. Everybody generally gets along and trusts each other... all the girls are super hot... one of the girls is nerdy blah blah blah That's a big problem in this book since a majority of the story is about his party running through various dungeon instances. These are supposed to be the good parts of the book but because there's no real character development of most of the members of his party the dialog ends up being pretty abysmal and the result is that I'm most bored with the part of the story that's supposed to be exciting.

I think this tendency to get lazy with the group dynamics during the action sequences is a pretty common failing among LitRPG writers but I think it's a real shame because as I said it above it really reduces the enjoyability of the book.

Anyways, I was pretty bummed and am not sure I'll read the next book unless I see some reviews talking about massive improvements in the character development / dialog. The more interesting dialog and character interaction is between the main character and the trading guild that he's kind of a junior member of. Oh and finally the cliff hanger at the end of the book is pretty disappointing... I think one or my problems with it again is I find myself having a hard time caring for any of the characters besides the main character so when one of his party members gets in trouble at the end I have a hard time caring about it because of the author's deficiencies in character building.

Not as food as the first

The trials in the tower took Up eau to much og the book. l'll probaly still buy the next book, but it'll have to be better paced than this one.

Lots and lots of traveling. With little story movement. I did not enjoy this book as much as the first book.

A step down from book 1

I really enjoyed the first book but I kept feeling bored in this story. On top of that it ends on a BS cliffhanger. I won't be continuing this series. A book should have a proper ending.

I mostly agree with the choices made

I find it interesting how often the stories we read or listen to are stories that are close to how we perceive the world. It's comforting when a character makes a choice similar to one you'd make, it's frustrating when a character ignores obvious facts because they're only obvious to you. This book did an excellent job of staying true to how the characters would have acted in specific situations and I'm excited to see what happens in the further novels series.

worth the credit. awesome second book can't wait for the next one. nick does it again.