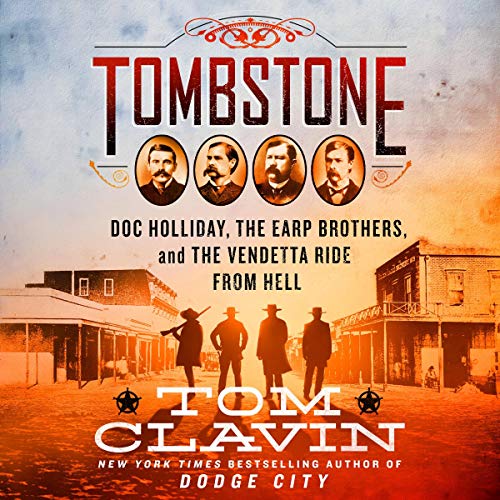 The true story of the Earp brothers, Doc Holliday, and the famous Battle at the OK Corral, by the New York Times best-selling author of Dodge City and Wild Bill.

On the afternoon of October 26, 1881, eight men clashed in what would be known as the most famous shootout in American frontier history. Thirty bullets were exchanged in 30 seconds, killing three men and wounding three others.

The fight sprang forth from a tense, hot summer. Cattle rustlers had been terrorizing the back country of Mexico and selling the livestock they stole to corrupt ranchers. The Mexican government built forts along the border to try to thwart American outlaws, while Arizona citizens became increasingly agitated. Rustlers, who became known as the cow-boys, began to kill each other as well as innocent citizens. That October, tensions boiled over with Ike and Billy Clanton, Tom and Frank McLaury, and Billy Claiborne confronting the Tombstone marshal, Virgil Earp, and the suddenly deputized Wyatt and Morgan Earp and shotgun-toting Doc Holliday.

Best-selling author Tom Clavin peers behind decades of legend surrounding the story of Tombstone to reveal the true story of the drama and violence that made it famous. Tombstone also digs deep into the vendetta ride that followed the tragic gunfight, when Wyatt and Warren Earp and Holliday went vigilante to track down the likes of Johnny Ringo, Curly Bill Brocius, and other cowboys who had cowardly gunned down his brothers. That "vendetta ride" would make the myth of Wyatt Earp complete and punctuate the struggle for power in the American frontier's last boom town.

“With a former newsman’s nose for the truth, Clavin has sifted the facts, myths, and lies to produce what might be as accurate an account as we will ever get of the old West’s most famous feud." (Associated Press)

an excellent accounting of an event we all know at least a little about. the narrator was perfect for this book. I will definitely listen to this one again.

I learned a great deal of history with this book. I felt the narrator did an excellent job and filled in many areas I simply did not know.

I have read two other books on tombstone and the gunfight at the OK corral. this is a really great read, full of historical facts, information which other books normally overlooked. the narration was fantastic. I highly recommend this one.

Great narrator and very well written. highly recommended and puts a lot of the myths to bed.

This is an excellent book as a follow up to the Tombstone & Wyatt Earp movies because of all of the background history of all people involved. Cant wait to listen to again and will probably buy the Book to put on the shelf. Enjoyed it very much.

I learned so much by this book. I thought I knew a lot about the history of the old west and some of the players but this in-depth book gave me a ton of knowledge . So interesting and kept me going from chapter to chapter!!

Love of the old west History

I am now even more in love with the EARP’S and the history they created so long ago AMAZING BOOK.

loved it. learning the truth about the characters involved in taming the west is always a pleasure.

Leaving no stone unturned, this tells the story from the beginning of what seems like a completely unavoidable conflict in Western history, giving the details of why it had to happen and what lead to that most famous of all gunfights and the aftermath. If you enjoyed the movie Tombstone, or Wyatt Earp, this will whet your hunger for more. His Dodge City book is also a great read and listen