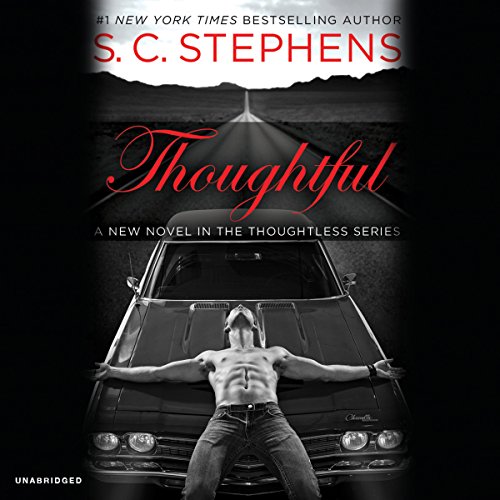 Every story has two sides, and in this new book the epic love story between Kiera and Kellan is shown through his eyes.

All Kellan Kyle needs is his guitar and some clean sheets of paper. Growing up in a house that was far from a home, he learned a hard lesson: You're worthless. Now his life is comfortably filled with passionate music, loyal bandmates, and fast women...until he meets her.

Kiera makes him ache for more. Makes him feel for the first time that he's worth more. But there's one problem: she's his best friend's girl.

Just when Kellan thought his emotional defenses were rock solid, Kiera's indecisive heart wreaks havoc on his soul, changing him forever. Losing Kiera is not an option.

"From page one, this book is impossible to put down." (Abbi Glines, New York Times best-selling author on Thoughtless)
"Wildly addictive, beautifully written, and uniquely captivating. Thoughtless is a simmering, slow burn." (Tracey Garvis-Graves, New York Times best-selling author)
"Stephens has perfectly and with gut-wrenching honesty portrayed the reality of a love triangle, and the mess that ensues when bonds are severed and new ones are formed. What happens when you find your soul mate at the worst possible time, in the least expected place? What if being with that person means doing the most wrong thing you've ever done? Thoughtless is one of those books that leaves you thinking about these questions, the characters and their choices for days if not weeks after reading." (Tammara Webber, New York Times best-selling author)

Absolutely loved it, I for some reason thought it would span Kellan's POV for all 3 books but it doesn't, it only does the first. That being said it was great, it was great seeing his POV and you understand things that I wondered about. It is a heart wrenching MASTERPIECE!

I've never done this review thing...but, this one

This had to be said. I have never written a review before, but I listened to and read a lot of reviews. Reviews determine for me most of the time whether to "get the book". So, here are my thoughts. I love S.C. Stephens. I loved the Thoughtless series with Kellan and Keira. I would recommend this series to anyone. The narrator is fantastic and makes the book even better. Although Keira is a whinny, immature girl who can't make up her mind and drives me insane with her back and forth, I want him no I want the other one, it's still a great series. With that being said, I could have done without Thoughtful. I think it was way too long. Kellan is an open book with his emotions in the first 3 books, this was just the other side of listening to Keira whine throughout the entire book and made her sound even worse. I think it could have been cut down into a short story and it would have kept me from fast forwarding throughout most of the book. So if you are on the fence and have not read the story....read the first 3 books and leave this one for when you have absolutely nothing else to read. Now...bring on Griffin.

If you could sum up Thoughtful in three words, what would they be?

I love this series from Thoughtless .

Which character – as performed by Jeremy Arthur – was your favorite?

No I wanted to take the time to enjoy KK to the fullest.

Great series. Now I am ready for Griffin.

Narrator sounds too "classical" to be believable as a rock star. And I don't like the way he pronounces Kiera's name, after hearing the way Rebekkah Ross says it. It's a small detail, but it grates on my nerves!

Kellan's Side Of The Story!

I definately loved hearing Kellan's POV. I listened to the previous three from Kiera's point of view. Also, this narrator pronounced Kiera's name differently than the previous narrator of the first three books. Not such a big deal but it is something that someone who has listened to all the books would notice. However in general I think this narrator did a great job. I did think in some places that Kellan tended to be somewhat of a whiner. I would not have guessed that from the first three books. The story held up well all through the 20 hours that I listened. I liked being inside that world. I was sad when the story came to an end but was very happy with the ending itself.

I loved the book- just perfect! The narrator wasn't what I envisioned as Kellan at all- too old and not sexy enough. The story from Kellan's POV overrode that piece. Amazing writing - I'm bummed it's over!

Still a little in love with Kellan

What was one of the most memorable moments of Thoughtful?

When they plan to sleep in the same bed while Denny is out of town. He's so in love with her he is willing to set aside who he is and his own nature just to wake up with her in the morning. Like a child she wears additional clothing to sleep in and insists on the light on. Grrrr! He begs her and she still goes back to her own room. This glorious man actually begged her and she still can't figure out who she should be with.

When Kellan goes to the kitchen to get whipped cream and finds Kyra crying. He automatically goes to comfort her then remembers her heartache is her own doing and says so, then goes back to the 2 morons in his room...and thus begins Kellan's severe and disappointing man-whore phase.

No, it was too emotional. I had to take a break once in a while. Kellan is intense and Kyra can be irritating.

I just love Kellan. He's such a little boy trying to find his way, but ends up in self-detruct mode. He wants Kyra so bad he is willing to cut his right arm off. It is irritating when Kyra is so selfish and hurtful and always unwilling to make a decision...like a 5 year old avoiding reality. I found myself disliking her in Kellan's version.

Good but a hard listen

First off, names should be pronounced the same regardless of narrator. Was hard to not skip some of the really repetitive parts.

Get ready for an intense read if you take on this series! This author has a way of bringing the characters to life. To where you love them, hate them and seriously start to care for them.... as if they are real!

Loved this book in Kellen's point of view. While reading Kiera's side in the 1st three, I always wondered what Kellen was doing when he was out, where he went, what was going on in his head. And come to find out, he was so emotional and invested in her! I almost wanted to strangle our little Kiera after hearing his side of the story. But isn't that what a good author does...make you care so much that you want to strangle an imaginary character?!
Get this book - but totally read the other three too! Worth the credit!

I thought he did a great job. His voice was sexy and gentle, however, mature. I agree with the others that his voice is not of a 21-year old guy. I was hoping Dan Bittner would be the narrator. He also pronounced Kiera's name wrong. That's why I gave 3 stars.

I'm going to return it back as soon as I can.

It is so boring. I ain't even finished the half of that yet. The story annoyed me. Norrator was ok.