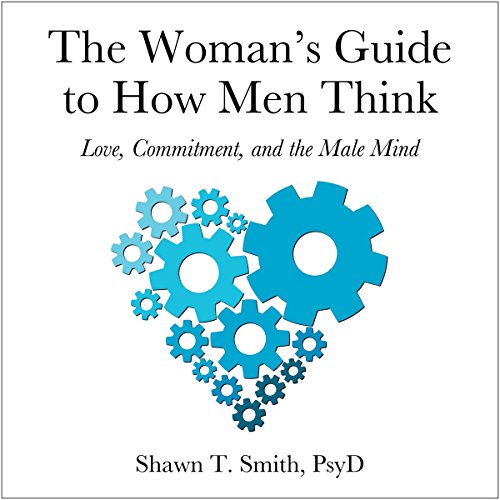 The Woman's Guide to How Men Think: Love, Commitment, and the Male Mind

Comedian George Carlin once said, "Women are from earth. Men are from earth. Just deal with it." Though witty, this sentiment fails to recognize one of the real truths in life: that both genders are completely mystified by one another, and often have a mile-long list of complaints for the opposite sex. Yet, generally speaking, both men and women want to get along—especially if there's romance involved.

A Woman's Guide to How Men Think offers a practical, humorous, yet compassionate guide for women who want to learn the secrets of the elusive male mind. With author Shawn Smith's trademark humor, you'll come to understand why men think and see the world the way they do, and how to work with men to cultivate understanding and communication in relationships, without expecting men to be creatures that they are not. This isn't a male-bashing book about how men should be more like women, but a book about how men actually are, and how women can use this understanding to get what they need from their relationships.

You'll also learn why men often feel frustrated and criticized, how to deal with lack of communication in ways that don't put men on the defensive, and how being curious and compassionate (while not accepting disrespectful or abusive behavior) instead of dismissing men for their inherently male traits can lead to greater understanding between the sexes.

The plain truth is that both men and women are from planet earth. But that doesn't mean we are the same. If you are looking for an insider's guide to the ever-elusive male mind, this is the audiobook for you.

helpful for both men and women

This is basic information but important for girls in their 20's and 30's. Super boring narration it was hard to pay attention, I didn't finish the book.

All issues are the women’s fault

If you are truly hoping to understand men better, don’t waste your money on this book.
In a nutshell … “give your man a steak, take him to bed” and just overlook anything he does or says… it’s probably the woman’s fault that he did it anyway …
Let your man be the shining star… it’s all about him being happy, so suck it up buttercup…

Really helped me better understand men and how they think!

So greateful for the wisdom in this book ♡

this was a great book I will recommend it for the

this was a great book I recommended for anyone who wants to know more information on a male / female psyche. and the narration was humorous.

I couldn't stop rolling my eyes

It's one of those things where you already know or heard before but to hear it again it's like ya I know give praise when a guy does something so small blah blah blah. It's nothing against the book it is interesting but to hear about how guys want to feel safe to open up and conversate is just so eye rolling I couldn't stop it.

As a man it gave me clarity about my behavior

Ignore the lower reviews, there either people that are not emotionally mature, or people that are preciving this book through the destructive 3rd wave feminist lense. The book breaks down the evolutionary psychology on why men think the way they do. If you are a women, it'll give you clarification in men behavior and will give you practical advice on how to deal with it. If your a man, it will also give you clarification on your own behavior and you'll have takeaways on how to better get along with women. Overall this book can help improve relations between man and women with its knowledge and practical use.

This book gave me a new perspective on why some relationships from my past failed. I think it leaves out some important male characteristics, like the need to be dominant with women. My takeaways from the book are that I am incompatible with men, and the author doesn’t appreciate feminism.

Not the best audiobook on men, but some useful tips. The narrator should not change his voice as he transitions between men and women. It’s very distracting. Also the author uses the term “shrink” to describe his own (and my) profession, which is outdated and disrespectful.

This book was truly enlightening. Worth the read!

This book was truly enlightening. I came in for my own personal gain, into the male mind, however, things I learned would help friends and family, as well. I've already shared the book title. Thank you