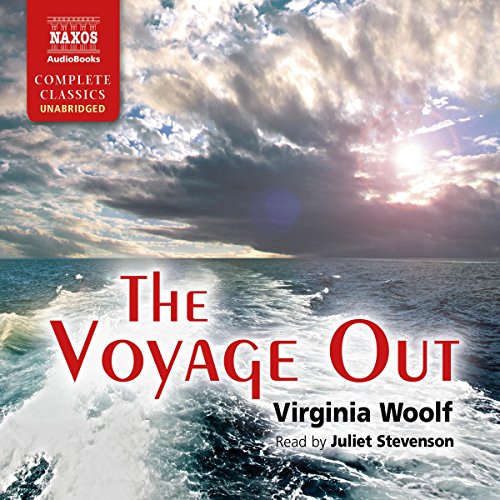 The Voyage Out is Virginia Woolf's haunting tale about a naïve young woman's sea voyage from London to a small resort on the South American coast. In symbolic, lyrical, and intoxicating prose, her outward journey begins to mirror her internal voyage into adulthood as she searches for her personal identity, grapples with love, and learns how to face life intellectually and emotionally. Its wit and exquisiteness and its profound depth and insight into humanity will capture the imagination of the listener.

If you could sum up The Voyage Out in three words, what would they be?

What was one of the most memorable moments of The Voyage Out?

Rachel's final illness and the reactions of all the novel's characters to this event.

Which character – as performed by Juliet Stevenson – was your favorite?

This work, often dismissed as an "early" effort, not yet up to Woolf's "mature" accomplishments, is a transcendent fusion of literary artistry and psychological insight. Woolf is without peer in describing a scene of a number of characters, each with his or her own concerns and thoughts, viewing the world through the filters of their own experience. She paints with words the subtleties of thought and emotion the way Monet paints light. This is not a book of "action" or "plot development" in the customary sense. Even "character development" seems too crude a phrase to describe a process by which characters come to the verge of a deeper understanding of themselves, and occasionally each other. In Woolf's world, the gulfs that separate individuals are perilous and largely uncrossable, though the characters may reach out to each other as best they can. It is a world of simultaneous beauty and pathos, transcendence and banality, simultaneously modernist and classical.Juliet Stevenson reads with a clarity of character rendition that matches the prose. She imbues the characters with personality liveliness, even the most minor, and captures the characteristically internal action of the book with luminous understanding.

Woolf creates a world of English travellers, first on a ship, later in port. In her inimitable way, she provides the thoughts and feelings behind each character's very proper interactions with the others, the things felt but not said. This sounds dull and may be for readers who need lots of action: car chases, martinis and sex. But it isn't dull at all. It is a lovely narrative, the unspoken passions of those living in the era, just before World War I, when expressing one's feelings plainly was unacceptable. Woolf articulates the longings and frustrations of women of her class not yet allowed good educations and careers other than caring for others, a generation of women ripe for the liberations which the war and suffrage would bring.

I was surprised to learn that this novel was one of Woolf's first as I'd never heard of it. I enjoyed it as much as Mrs. Dalloway and To the Lighthouse and hope it will enjoy broader acceptance.

If you haven't heard Miss Stevenson read, you've a treat in store. She's terrific, a highly creative actress who brings each character alive and knits it all together with her smooth narration of the action. Never rushed, she gives the deep music of her voice to each and every phrase.

A very slow build, as is Woolf's wont, but a deeply satisfying, hypnotic story. Stevenson's narration is pitch perfect.

Juliet Stevens has a beautiful voice and reads expressively but with restraint. Just right for this novel.

The story is engaging, nonetheless a bit confusing as many characters disappeared and the end was cute abrupt, but you can feel that Virginia Woolf was experimenting in this amazing first novel of hers. The narration is impeccable!

a simple story of human interaction rendered with all of the grandeur and insipidity of all of us. A precise and powerfully moving rendition of our natures.
Juliet Stevenson did credit to the writing with every shaped syllable spoken. Brava!