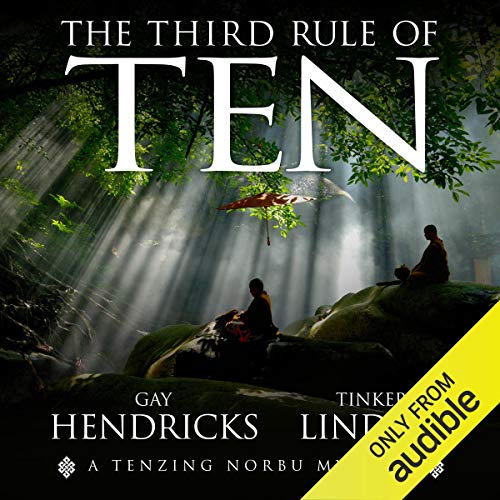 The Third Rule of Ten

Keep current with the truth: we're only as weak as our secrets - especially the ones we keep from ourselves.

That's the Third Rule of Ten.

As the go-to private detective for a bevy of high-profile clients, our beloved ex-Buddhist monk, ex-LAPD officer, Tenzing "Ten" Norbu, has finally found his stride. With his beautiful pathologist girlfriend, a healthy bank account, and a steady stream of clients, courtesy of middle-aged movie star Mac Gannon and rising political star Bets McMurtry, Ten's life is bursting with activity. But it's not all joy and happiness. The death of his father and a growing abundance of secrets - both personal and professional - leave Ten feeling an unexpected depth of sorrow and confusion.

Even with the emotional turmoil, nothing can stop Ten from taking the case when McMurtry's housekeeper goes missing. The investigation leads him down a dangerous path littered with bodies, untraceable prescription drugs, and human organ trafficking. But nothing is as shocking as the realization that the mastermind behind it all is in fact a criminal who has slipped through Ten's fingers once before.

The Third Rule of Ten will have you on the edge of your seat, as you learn, along with Ten, that there is a fine line between healthy privacy and unhealthy secrecy. Knowing the difference may just determine whether Ten will stop his archenemy or lose himself.

Third Rule is Not First Rate, as the Others

As all good series trend, this is a darker book in the life of Tenzing.
Death of a family member, beloved or not, realistically touches a deep part within us. Ten is not immune to this. His father’s death (book 2) is an emotion to be reckoned and taints his actions, inactions, and avoidance. He tries to throw himself into his work.
Whether it’s questioning his faith or just being slightly rebellious, he choices are less Ten-like.
The plot tightens up nicely and comes to a satisfying conclusion.
The subplots and characters lack the believability these authors usually are known for in this series. The hype for his privacy/anonymity after an action packed fatality explodes ... into a dud.
Learning about the intimacy problems between Ten and Heather seems to be added to the story simply as a foreboding to their climax, but even then, it’s told to us after the fact, which was equally disappointing.
The DHS female officer, another secondary character, had a very unrealistic phone conversation with Ten. That should have never made it past the editing cut either.
It was the small details that was jarring. For a new reader to the series, it could be overlooked or unnoticed.
As much as I liked this book, it fell short of my expectations for the series and authors. The narrator was exceptional, as always.

It might be a while before I pick up the Fourth Rule, although it seems to focus more on our central characters.

Ten crosses paths with drug lords again, this time he’s in the middle of ATF investigation, when a missing person case turns into so much more.

Why ruin a good series

It is incredibly sad when an author has to inject political preferences into an otherwise enjoyable story line. This book will be returned unfinished.