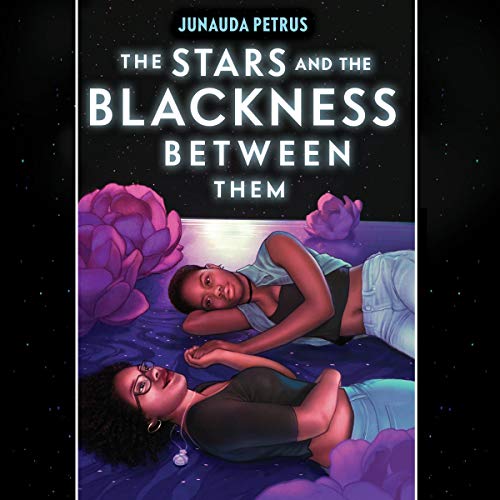 The Stars and the Blackness Between Them

Told in two distinct and irresistible voices, Junauda Petrus' bold and lyrical debut is the story of two black girls from very different backgrounds finding love and happiness in a world that seems determined to deny them both.

Port of Spain, Trinidad. Sixteen-year-old Audre is despondent, having just found out she's going to be sent to live in America with her father because her strictly religious mother caught her with her secret girlfriend, the pastor's daughter. Audre's grandmother, Queenie (a former dancer who drives a white convertible Cadillac and who has a few secrets of her own), tries to reassure her granddaughter that she won't lose her roots, not even in some place called Minneapolis. "America have dey spirits too, believe me," she tells Audre.

Minneapolis, USA. Sixteen-year-old Mabel is lying on her bed, staring at the ceiling and trying to figure out why she feels the way she feels - about her ex, Terrell, about her girl, Jada, and that moment they had in the woods, and about the vague feeling of illness that's plagued her all summer. Mabel's reverie is cut short when her father announces that his best friend and his just-arrived-from-Trinidad daughter are coming for dinner.

Mabel quickly falls hard for Audre and is determined to take care of her as she tries to navigate an American high school. But their romance takes a turn when test results reveal exactly why Mabel has been feeling low-key sick all summer, and suddenly it's Audre who is caring for Mabel as she faces a deeply uncertain future.

Junauda Petrus' debut brilliantly captures the distinctly lush and lyrical voices of Mabel and Audre as they conjure a love that is stronger than hatred, prison, and death and as vast as the blackness between the stars.

"Like Toni Morrison, who redrew the narrative of black experience with novels set in Midwestern small towns, Petrus is redrawing a map, creating an Eden where Caribbean, black and LGBT culture can find beauty and lushness, spirituality, history and sustenance." (Minneapolis Star Tribune)

This is the most luscious book I have ever read. It's my new favorite.

This may be one of the best books I have ever read. It is a coming of age/coming of queer story that will grip your heart and male you feel panicked at the thought of having to stop reading. It is also a cross cultural exchange. America and Trinidad. It is love, it is hope, it is joy, it is sadness. It is a must read.

This narration was beautifully done. I think the story was very unique. I’m not sold on the romance, but nevertheless enjoyed the journey this book took me on. The passing of time within this book was very believable. The queer trauma within the story was heavy, but didn’t make the story overwhelming sad. This story had hope and grief, love and joy, biological family and chosen family. Really incredible read now I’m sitting here just reflecting on the beauty of the story.

This story is a gift

The intersections and beauty of this book are something unique and fully authentic. I’m so thankful for this book as a queer person, an educator and as a minneapolis resident!

All three of the readers were wonderful! The poetry creating new sections set a magical tone.

Such rich and sensual magic in this book. A soulful prayer full of local color for the melanated and marginalized among us.

Allow it to wash over you and to carry you across oceans and through space. Let the lyricism slip over you and allow yourself to sink into the deep themes of the novel. Experience the emotional tumult of Audre and Mabel and thrill at their complex, intelligent, and gentle characterization.

One of the best books I’ve read this decade. I listened to it on audiobook and am excited to re-experience it through reading. In addition to recommending this book I want to advise readers to trust in it. When you read it it is worth letting go and allowing the book to take you on its own journey. We are safe in Junauda Petrus’ hands.

Wanted to Love It

I wanted to love this book and the first couple hours were amazing. Thennnn there's a twist and it all goes down hill. You should know before reading that there are different perspectives but they are all the same. Each character feels exactly the same. I liked listening to different narratives but the author could have made this book stronger by only writing Mabel or by actually letting the characters develop differently. I don't buy that a Black teen, a Caribbean girl, and convict all talk the same way and have the exact same interests. If you've ever read Game of Thrones, you know how an author can make each character FEEL different. This author did not do that at all.

Also know, this is urban fantasy. I didn't know when I started and had many eyerolls until I finished. If you want an person of color's perspective on being LGBT I recommend:

Odd One Out
Juliet Takes a Breath

My heart broke and merged and broke and merged… and your words were like a salve on my soul… for real tho
Transported back to Trinidad, where my family is from, through writing that just hit so surprisingly at every mark.

And Bahni Turpin, you are so talented. Your voice is like honey and you are so wonderful to listen to.
(I’m sorry, how many accents was that…lol)

Thank you for some beautiful storytelling.

Whew. A prayer I never knew was on my heart.

This book gave me LIFE. The book cover caught my eye at Barnes and Noble. I moved towards it feeling a pull in my bones.

I downloaded the audio and began reading it on the plane ride home. I immediately was hooked.

I would read it early in the morning with my coffee, late at night before bed, and on mid-day breaks between work tasks. Reading this book felt like picking up a devotional for my little queer BIPOC heart.

Thank you for creating this miracle. I’m already sharing this with my friends!

It was awesomely written. The two points of view were interesting. I liked the Teinidad accent. I liked the musical references. Mom describing brunch was pretty cool. There were some surprises and twists and turns. Surprise guests. Quite interesting. I enjoyed how it ended, also in surprise.