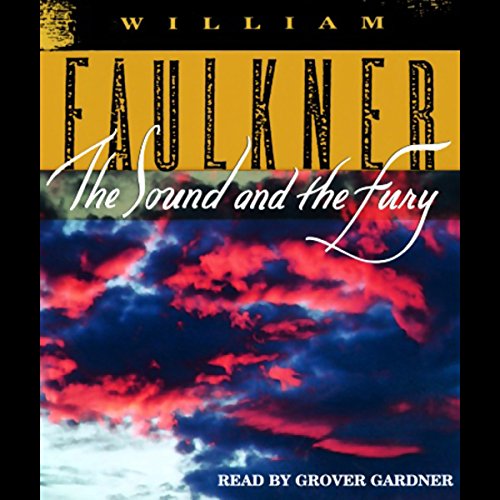 The Sound and the Fury

This book was tremendous, and it was very well read. The story of the decline and fall of the Compson family is dramatic, heart-breaking, and written in such a way that when the blows fall and the book finally ends, it seems as though a portion of the listener's world has ended with it. THe reading is done so well that the voice never seems to come between the words and the listener, but rather to become part of the story, enriching it further. If you haven't read this book, or you haven't read it in a long time, go ahead and get this one, because you'll find so many things in it you've either forgotten or never noticed were there.

Listening to Grover Gardner's reading of TSATF gave me a greater appreciation for Faulkner's language than ever before. The characters came alive for me in ways they haven't through my reading.
Although the initial section narrated by Benjy is difficult to follow, a second listening to it made it quite clear. Faulkner has written a fascinating description of the unraveling of what we today call a dysfuntional family. The characters are revealed to us through the differing perspectives of the three Compson brothers and in particular their feelings for their sister Caddie. The device of switching back and forth in time gives the reader a greater understanding of family dynamics than would a straight forward telling of Caddie's story.

Grover Gardner is the best reader I have heard, and he is outstanding with this effort (which is a trial). Best to read a synopsis of the book before listening, or as I might have done, you would give up. I hung in after the first two sections and was rewarded. You will be as well.

Great book; better to read it.

This is a wonderful, skillful book that lives up to all of its praise through the years. It is also a terrible choice to listen to this book if it is your first time reading it. The nuance of the writing is lost due to the fact that the original text offsets sudden changes in time through alternating italics and normal typeset. This tends to make the first section (Benjy's section) especially difficult to follow and makes the first time reader confused even more than the complicated text. If, on the other hand, you are a second time reader this audiobook is a pleasurable experience. Be warned: the audio quality fluctuates (this is an older recording). If you are listening to this book for the first time it is helpful to get a copy of the Cliff's Notes or similar pamphlet for a couple of bucks and browse it as you listen. It makes the narrative less confusing without ruining the drama.

I listen to a lot of audiobooks, some easy mysteries, others difficult. I was surprised how easy it was to understand and enjoy this reading of The Sound and The Fury. I'm sure I will listen to it again (which I rarely do). I should add that I have read The Sound and the Fury, but that was a long time ago. This reading really brought it to life for me. I highly recommend it, if you are up for somewhat of a challenge and want to listen to an excellent book read beautifully. (I said it was surprisingly easy, but, obviously, it's not as easy as listening to a contemporary mystery novel.)

This made me fall in love with Faulkner all over again. I was skeptical that this novel, difficult to understand with its constant shifts in time, could be absorbed through the ear without the clues of the printed page. Although it isn't easy, the joy of hearing Faulkner's magnificent language more than compensates for the effort. If you told me I had to choose between reading and listening, after this experience I would pick the latter. The characters come alive in a new and memorable way. I am just praying they can get Grover Gardner to do Absalom! Absalom!

A warning against sentimentality

My God, this is a depressing novel. Every word Faulkner writes, every memory that is explored, every action in the novel is distilled into a lingering, oppressive, sadness that is as omnipresent as the honeysuckle Quentin so hated.

I started off enjoying the novel; I liked the experimental way Faulkner tries to convey the confused mind of Benjy. As someone who grew up with and spent years working with severely mentally disabled adults, I felt Faulkner honestly captured the state of mind of someone who is almost totally unable to experience rational and unselfish thought.

The second chapter, too, was quite beautiful but at times was nearly impenetrable. Pretty much only the scene with the little girl, when his mind stops wandering and he focuses only on finding her home, really seemed to have much of an impact for me. Everything else - the broken watch, his drunken father's philosophical ramblings, his time with Caddy - seemed ... distant. Distant is the best way I can describe it from a reader's point of view. I never felt like I was part of Quentin's experiences even though we spend so much time in his mind. He was no Bloom.

The final two chapters were straightforward enough. We learn many of the previously mysterious details that Benjy's and Quentin's minds could not clearly articulate (or were unwilling to articulate). And Jason was a wonderful character - the best in the book. Faulkner certainly has created one of the great characters in literature with Jason.

But what does this all add up to? Yes, the novel is about the south and the south's decline, but what South? Was there a time when people did not behave badly, were devious, cheats, liars, manipulators, and every other sin you can imagine? Maybe there were times in the Compson family when they were more outwardly respectable, but how do we really know those "better" people were actually any better? Is Faulkner so nostalgic for a long forgotten time that he actually believes we've all degenerated in our time?

I doubt Faulkner was so naive or sentimental. He write a book in which the main characters are all flawed and fallen ne'er–do–wells, who all long for a time when things were better and resent the present because it didn't turn out the way they wanted it too. Adults who haven't really ever grown up. In a way he wrote a warning against sentimentality, against seeing the past with thick rose colored glasses because if you keep trying to compare yourself against an impossible standard you will only disappoint yourself or, if you're smart, just run away from your entire family.

From that point of view, then, this isn't a "southern" novel bemoaning the end of one specific time and culture of Faulkner's love that will unfortunately never return, he's trying to warn us from falling into the cycle of always going back to the past. If your mind is always full of how things were and how things used to be then you will miss every opportunity to better yourself tomorrow. The Compson's totally fell apart because they could not come to terms with reality.

Yet even with such an analysis, I just could not get into this novel. I really wanted to, but you have to approach every work of art from the perspective of how it effects you personally and this novel just made me feel sad after having witnessed so much misery on every page.

William Faulkner's The Sound and the Fury is among the best audio books I've had the pleasure of listening to.

The book is challenging, interesting and well-written. It's especially challenging in the first chapter, which is told in the first person of a severely mentally adult, in stream-of-conciousness style. I re-listened to that first chapter after completing the book. The book is interesting as a novel about the decline of a Southern aristocratic family.

The narration by Grover Gardner is clearly among the best, if not the best, I've listened to thus far.

The book is very well read. The story is difficult to follow, but that is not because it is in audio form. It would be just as hard to follow in print. It doesn't help that the first part of the story is told from the perspective of a mentally retarded member of the family. Also, the story is not in chronological order. I had to stop a little way into the book and do some internet research on the characters and plot. After that, I was able to appreciate this classic for what it is.

I note that one reviewer has nine positive, no negative, votes as this is written. Yet only four readers have rated the book. Strange.

William Faulkner is more than "America's Southern Writer" as it's easy to place him with two other American writers (Hemingway and Fitzgerald) as one of the three great writers of American fiction of the 20th century. The narrator captures his style and speaks in the language of which the original was written. "The Sound and the Fury" remains a standard for undergraduate English literature students as well it should. Listen closely for the imagery for which Faulkner was unique. Only Thomas Wolfe approaches the ability to create an image of the South like Faulkner. The listener, as well as the reader, needs to be attentive at all times. Unlike Wolfe Faulkner wastes few words, and has a style as original as the other two writers mentioned. And that style goes well beyond the language of the South. Is Hemingway labelled as using the language of the upper midwest or Fitzgerald solely of the rich? All are unique and we are the better for it.

Pros:
- Brave choice for a protagonist