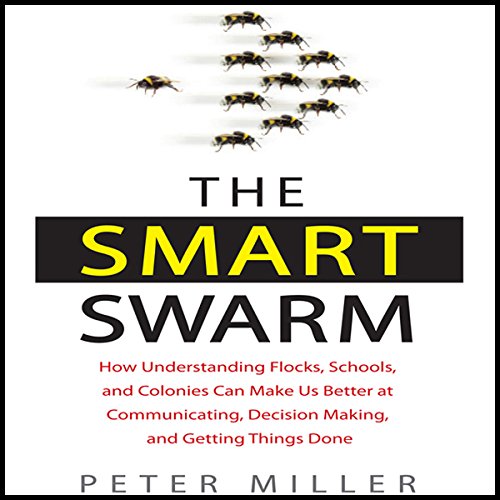 How Understanding Flocks, Schools, and Colonies Can Make Us Better at Communicating, Decision Making, and Getting Things Done

In a world where speed and flexibility are valued more than ever, leaders from the corporate boardroom to the military are looking for answers from seemingly unlikely experts - the ones in the grass, in the air, in the lakes, and in the woods. In this innovative audiobook, veteran National Geographic editor Peter Miller explains the basic principles of smart swarms - self-organization, diversity of knowledge, indirect collaboration, and adaptive mimicking - to show how swarm species such as ants, bees, and fish can teach us to tackle some of the most complex conundrums in business, politics, and technology.

By studying ant colonies’ simple governing rules, computer scientists have written programs to streamline factory processes, telephone networks, and truck routes. Termites have inspired climate-control solutions, and the U.S. military is developing a team of robots that behaves like a school of fish. Groups in nature are the real specialists because they’ve evolved strategies over millions of years to cope with uncertainty, complexity, and change - the same challenges that make our lives and businesses difficult today.

Leading scientists in fields from biology to physics, social psychology, and business management are all studying smart swarms to unlock their secrets, and Peter Miller takes us on a lively tour to show us how we can, too. A fascinating journey from the critter to the corporation, The Smart Swarm is an eye-opening look at small-scale phenomena with big implications for us all.

"Most people can’t fathom that ants, bees, and other social insects have found solutions to some of modern society’s most vexing problems. In The Smart Swarm, Peter Miller offers a fascinating and articulate tour of what these creatures can do, how they do it, and the lessons for humans. This audio book is a gem, with a message that is as extraordinarily counterintuitive as it is valuable.” (Michael J. Mauboussin, Chief Investment Strategist at Legg Mason Capital Management and author of Think Twice: Harnessing the Power of Counterintuition)

FLOCK TO THIS BOOK!

Without question, this is my favorite introductory book to systems science/networks/ emergence. This is what I was hoping to read when I picked up a copy of Global Brain by Howard Bloom. I remember putting that book down and feeling such disappointment because the concept of swarm behavior in humans that mimics the swarm behavior of markets or insects was so fantastic, but Bloom was too enamored by every positive aspect of group think and failed to think critically enough to make the book even remotely reliable. I have read some books on networks, such as Linked by Albert-László Barabási, which I liked a great deal. But, this book is simply better. The only book I can say I enjoyed more was Geoffrey West's Scaling in Biology. However, that book is a compilation of academic articles and is less accessible to the general public. This book is simply addicting and would be appealing to the scientist and non-scientist alike.

Peter Miller just hit a home run! This book is EXCELLENT! Every time I finished a chapter, I started the chapter again! I had to. I loved it that much. Miller introduced his reader to various group behaviors in termites, ants, bees, humans, and markets. While providing incredibly intersting stories about each species (I was absolutely riveted!), Miller focused on the local rules of each species that led to the overall structure of the behavior. I will provide examples for each species below. If you do not want spoilers, do not read any further, since I am about to explain some of the best studies included in this book.

Termites build huge mounds that act like lungs! These lungs allow termites to live in the type of comfort know to humans who have central air in their homes.
Each mound (5 x size of Great Pyramids in people terms) is made of fungus. The fungus does 2 jobs:
- Breaks down food to ingestible form for the 2 million termites who live in the mound.
- Regulates the temp and humidity of the mound by breathing out CO2 through it's channels and breathing in oxygen.
The rate of breath is so oxygen greedy, a typical mound acts like the lung of a goat or small cow!

Engineers are looking into building houses that act like breathable lungs, like termite mounds. These houses of the future would use the difference in wind frequency to regulate the temperature in the home, just as well as it is regulated now, but without using electricity to do so.

What are the local rules for termites? Look and see what your neighbor is doing. If your neighbor drops a pile of dirt, you should too. Each individual termite might seem as if they are not organized. They might even seem extremely inefficient. However, when all the disorganized behaviors of the termites are looked at via time lapsed video, it's clear that their collective actions build incredibly efficient and organized structures.

How do fish know how to escape a predator? Their group reaction is so swift and coordinated. How is that possible without verbal communication or overall, top-down knowledge of how to escape a predator? Fish use local rules. They do what their neighbor is doing. They follow at least 3 key rules. 1. There is a zone of repulsion in which the fish will not crowd in too close to each other. 2. There is a zone of attraction in which they keep themselves from being too isolated. 3. There is a zone of orientation, which allows them to know which direction to go. Researchers have built models based on these 3 rules and have played around with them to understand how fish go from a disorganized state to a well organized state that helps them evade predators. Shifting from a disorganized state to an organized state is a phase transition, much like that of water turning to ice. Interestingly, fish on their own made bad choices. They swam right up to the predator at times. Group choices were significantly better. This is the case for most species, but Miller made the reader aware that when the group makes bad choices, they are spectacularly bad, as witnessed in the next example.

This is the best learned helplessness study I have come across! A group of ants got separated from their larger group. They laid down a circular trail of pheromones and continued to walk in circles. As they continued going around they laid down more pheromones. The pheromones became stronger and stronger, so strong in fact, they were helpless to do anything but walk in circles until they died! Every once in a while a single ant would try to reverse direction and stop going around in circles. But, it got bumped and jostled so much by the other ants that it had no choice but to travel in the group's direction. Then, it too walked and walked in a circle until it died.

When humans make a decision about behaviors -- smoking, picking a song to go viral, getting tattoo, what to wear, etc -- they rely more on groupthink than individuality, no matter how individualistic they think they are. For example, researchers have studied smoking behavior and found that quitting smoking looks very much like how birds flock and fish school. Behaviors like smoking affect 2 to 3 degrees of separation. Your friend's actions can affect you, your friends, and your friends' friends.

When it comes to predicting whether a pop song that will be a hit or not, things get a little more complicated. Researcher can predict that the group, more than the quality of the song, will be the determining factor in whether a song goes viral. But, they cannot predict which song will go viral. Here is why. Multiple groups have the same song list. The first people to listen to songs in each group give initial ratings to the songs. The different groups like different songs. But in each group, the songs that were initially rated highly, were the songs that went on to become viral hits. Each group gave rise to different hits. Thus, researchers amusingly concluded that in one universe Madonna is a megastar. In another universe, she is a nothing.

African locusts are shy by nature. They spend their days feeding on plants but avoid interacting with other locusts. If a particular season is very rainy, it can change the locust from shy introvert to strongly attracted and aggressive extrovert. When excess rains come, locusts lay more eggs. The increased population begins eating the increased plant life. However, once conditions become dry once more, there are more locusts trying to eat fewer plants. The locust then seek each other out, kill each other, swam together and engage in absolute destruction of the land. Along with behavioral changes, locusts who become social and aggressive also experience bodily changes. Juveniles change from tan and green to black and yellow and immature adults change from bright pink to the yellow hue reserved for mature adults. Why does this happen?

Researchers tested to see if it was the site ​of other​ ​locusts that prompted the change. It was not. They then tested to see if it was the smell of other locusts. Still no positive finding. They finally figured out the stimulus when they began "bumping into locusts" with a paintbrush, to mimic crowded conditions. When they poked at various parts of the body, no change in behavior or morphology was observed. But, when they specifically poked the hind legs, the cascade of changed got underway. It turned out that poking this part of the locust promoted the release of serotonin into key brain areas that governed personality, physical maturity, and morphology.

​Miller related these stories and more as he attempted to understand the nature of networks on a universal level. I suspect I will pick this book up again in the not so distant future. I took about 10 pages of notes for this book because I didn't want to lose any of the knowledge imparted to me by miller. I loved this book!

builds upon the wisdom of crowds

The title says it all, and Peter Miller delivers on it. Whether or not you've read The Wisdom of Crowds, this book covers similar territory and more. By more, I mean a handful of very interesting examples in nature of why we think swarms do what they do. Narration is first rate.

Excellent opportunity to rethink on teams

Loved tge perspective and how science abd business utilize the structure of ants and swarms to improve teams, structure, a d efficiency.

The oration was done well and kept you engaged. Enjoyable to listen to.

For those thinking there has to be a better way, this book will aid you in your journey.