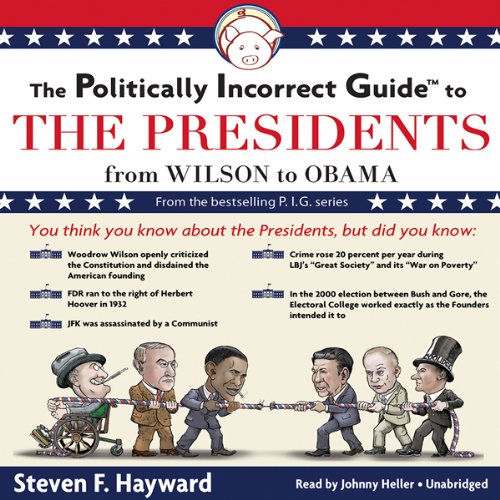 The Politically Incorrect Guide to the Presidents

What makes a president great?

Academics, journalists, and popular historians agree: our greatest presidents are the ones who confronted a national crisis and mobilized the entire nation to face it. That’s the conventional wisdom. The chief executives who are celebrated in textbooks and placed in the top echelon of presidents in surveys of experts are the bold leaders - the Woodrow Wilsons and Franklin Roosevelts - who reshaped the United States in line with their grand “vision” for America. Unfortunately, along the way, these “great” presidents inevitably expanded government - and shrank our liberties.

As the twentieth-century presidency has grown far beyond the bounds the Founders established for the office, the idea that our chief executive is obliged to “preserve, protect, and defend the Constitution of the United States” has become a distant memory.

Historian and celebrated Reagan biographer Steven F. Hayward reminds us that the Founders had an entirely different idea of greatness in the presidential office. The personal ambitions, populist appeals, and bribes paid to the voters with their own money that most modern presidents engage in would strike them as instances of the demagoguery they most feared - one of the great dangers to the people’s liberty that they wrote the Constitution explicitly to guard against. The Founders, in contrast to today’s historians, expected great presidents to be champions of the limited government established by the Constitution.

Working from that almost forgotten standard of presidential greatness, Steven Hayward offers a fascinating off-the-beaten-track tour through the modern presidency, from the Progressive Era’s Woodrow Wilson to Barack Obama. Along the way he serves up fresh historical insights, recalls forgotten anecdotes, celebrates undervalued presidents who took important stands in defense of the Constitution, and points the way to a revival of truly constitutional government in America.

“Steven Hayward, one of my favorite historians and writers, has some pretty whacky ideas. For example, he thinks presidents should be graded on their loyalty to their oath of office. Why, it’s just crazy enough to work! Read this book not only because it is entertaining, insightful, and informative but also because it’s the perfect antidote to presidential grade inflation.” (Jonah Goldberg, editor-at-large of National Review Online and author of Liberal Fascism: The Secret History of the American Left from Mussolini to the Politics of Meaning)
“One of the keys to restoring the government to its proper limits will be to have our presidents serve in their originally intended role as defenders of the Constitution rather than undermining it through endless expansions of the administrative state. It is surprising how seldom we evaluate presidents according to whether they live up to their oath of office, and we have Steven Hayward to thank for reminding us of the presidents who understood this and those who didn’t.” (Edwin Meese III, attorney general in the Ronald Reagan administration and chairman of the Center for Legal and Judicial Studies at the Heritage Foundation)
“Every president takes an oath to protect and defend the Constitution of the United States. But how well do they perform this basic duty? Modern historians have mostly ignored this question, but Steven Hayward tackles it head on, grading the presidents of the last hundred years. He’s a tough grader, and his conclusions will surprise - and delight - many readers.” (Michael Barone, senior political analyst at the Washington Examiner and co-author of The Almanac of American Politics)

Interesting information from a well thought out perspective that you won't hear anywhere else. Well read.

I loved the 1st edition of the book much better. The historic analysis here was well done, but the critique and grading of each president was blatantly bias. George W. Bush does not deserve the praise and grading he got while he was and is equally abusive to the Constitution as Clinton or Obama have been. Therefore, although this is a great overview of history it is however terribly slanted to make all the conservatives into angels and liberals into demons. I am not saying this book is useless in any way, just that it is very bias laden in conservative white wash. In sum, it was a nice refresher in modern US History.

An excellent breakdown of modern US presidents

Ever wondered how do presidents rank based on how much they followed and defended the Constitution? This PIG guide is for you.
From Wilson to Obama, ranked A+ to F, dispelling much of the media propaganda surrounding them, you'll be surprised how much the office of the US president has changed.

An impressive self fellating book. Just skip this and know they’re all elitist war criminals.

incisive view of the last century of the American presidency - it's achievements and failings, as viewed by those who admire the US Constitution.

This book is just a right wing attack on Democrats disguised as being “politically incorrect”. It’s terrible.

a must read for those who care about their country

A comprehensive look at US presidents ability to the uphold the constitution in the 20th century, although it gives a major pass to any president with an R next to their name. No way Nixon gets above a D, he doubled federal regulations on business, Milton Friedman called him our most socialist president.

The closer you get to the present the less objective the analysis. While the author is clear that the grade rating is based on adherence to constitutional orthodoxy, supreme court appointments are what matter most in the end. The predictable result is that Republicans of the 20th century get high grades while Democrats fare poorly, mostly Fs. That was not the case for the 19th C presidents. The real intent of the founders was to establish an enduring governing institution for a new sort of nation that would adhere to principles while adapting to the times. All constituencies should have a voice. The president should ultimately reflect the desires of a plurality. Denigrating the desires of a broad constituency, whether or not that constituency seeks strict adherence to constitutional norms or wishes to modify them in the interest of changing social norms, doesn't fairly assess the performance of the chief executive.

Where does The Politically Incorrect Guide to the Presidents rank among all the audiobooks you’ve listened to so far?

Like every book in the P.I.G series, unless your mind is open, you're not going to receive the information. This is an excellent reference - no hold's barred and no party affiliation permitted - offering only facts about each President's actions and how each relates back to the oath to uphold the Constitution. All have failed pretty miserably. Some much worse than others. Unfortunately, this topic is yet another that divides this once great nation; is the Constitution a living, breathing, changing document, or did our Founding Fathers get it right at the beginning?

What does Johnny Heller bring to the story that you wouldn’t experience if you just read the book?

I really enjoyed Mr. Heller's voice. The gravely quality may not be everyone's cup of tea but I found it especially fitting considering the subject matter.

I would love to have a companion version of the first Presidents and how they are graded by the oath to uphold the Constitution.