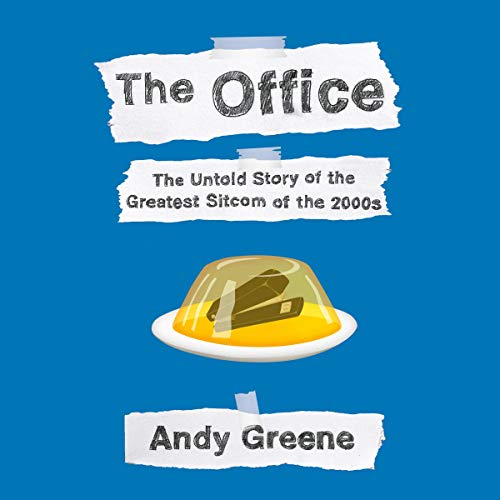 The untold stories behind The Office, one of the most iconic television shows of the 21st century, told by its creators, writers, and actors.

When did you last hang out with Jim, Pam, Dwight, Michael, and the rest of Dunder Mifflin? It might have been back in 2013, when the series finale aired...or it might have been last night, when you watched three episodes in a row. But either way, long after the show first aired, it’s more popular than ever, and fans have only one problem - what to watch, or listen to, next.

Fortunately, Rolling Stone writer Andy Greene has that answer. In his brand-new oral history, The Office: The Untold Story of the Greatest Sitcom of the 2000s, Greene will take listeners behind the scenes of their favorite moments and characters. Greene gives us the true inside story behind the entire show, from its origins on the BBC through its impressive nine-season run in America, with in-depth research and exclusive interviews. Fans will get the inside scoop on key episodes from "The Dundies" to "Threat Level Midnight" and "Goodbye, Michael", including behind-the-scenes details like the battle to keep it on the air when NBC wanted to pull the plug after just six episodes and the failed attempt to bring in James Gandolfini as the new boss after Steve Carell left, spotlighting the incredible, genre-redefining show created by the family-like team, who together took a quirky British import with dicey prospects and turned it into a primetime giant with true historical and cultural significance.

Hilarious, heartwarming, and revelatory, The Office gives fans and pop culture buffs a front-row seat to the phenomenal sequence of events that launched The Office into wild popularity, changing the face of television and how we all see our office lives for decades to come.

Good, but some missing info for the true fan...

I really enjoyed hearing so much from the writers who were clearly the major driving force behind this brilliant show, but I hoped for some more info on aspects I’ve wondered about for a long time, particularly some of the choices they made with characters (for instance, why there were so many major characters who drastically changed basic elements of their personality over the seasons like Ryan who became a complete jerk and how they basically made Kevin mentally handicapped). Also, some major plot holes I’ve always wondered about, like how Angela’s baby was DNA tested as NOT Dwight’s, then conveniently was his baby somehow at the end of the show, and how their continuity was really lacking (Michael had a brother then was an only child, Andy’s Secretary stepmother from “Secretary’s Day” that didn’t exist later, what happened to D’Angelo’s assistant Jordan, and what the hell happened to Kathy after Florida?) Also would’ve loved to hear if they regretted how they wrote the last season based upon the massive fan backlash on how they wrote Pam. It felt there was a lot of coverage on the first 7 seasons (because of Steve Carell) and the last 2 seasons were covered in a rushed way and as an afterthought, too. As great as Steve Carell was, I could’ve lived without 6 pages of people saying how great he was and some more meat on these issues that all of us mega fans would’ve loved to have cleared up, but all in all, a really good, well researched book.

Instead of voice actors,

I liked the book, but I didn’t like the voice actors trying to sound like the people in the book. I’d rather it actually be the people or just someone reading it. Comes off as fake with people trying too hard. Good content though.

Skip the audiobook. Get the hard copy instead.

Office fans will love the insight to the show. The performance is cringe, and not in a good way. Very broken up with quotes. No real “story”. Pick up the hard copy no doubt, but skip the audio version.

Disappointed to not hear the actual voices in this oral history

This was a great inside look at The Office. I was disappointed that the oral history was not with the actual cast and crew voices.

A Fun Dive Into Dunder Mifflin

This book told stories I’d never heard and gave context to some pieces of the series I’d never have known otherwise. It was a fun way to add to my experience as a serial watcher.

My biggest critique was that I disliked most of the actors who voiced the quotes from actors on the show. I would have preferred the author narrate the whole thing— to have some British guy doing a vaguely Rocky Gervais voice felt odd and out of place. Listeners will know these actors’ voices and to hear them being poorly impersonated is dissatisfying. I’m also surprised at just how many quotes there are from Kate Flannery. Don’t get me wrong, I love her, but it’s strange to have SO many quotes from one of the shows more minor (though beloved and integral) characters and next to nothing from so many major players.

Such a great book, at a perfect time. With so many people at home, probably watching Netflix and other media, here comes a new look at what is a show many people have watched over and over. I loved the insight into a show that seems simple and mundane, which all our lives are right now, but is really complex and thought out. I also loved the interaction between writers. As an avid reader for my whole life, there are times when you think, I should write. But being a critic I feel I would never live up to my own scrutiny. Listening to writers argue over plots and storylines in the same voice I had watching the show, makes me feel a part of this show in a small way.

This is mainly quotes the book. It has a few interesting stories from the writers that they took from their life into episodes. In my opinion the podcast office Ladies dose a better job at doing what I thought this book would be about and shares a good portion of the content the book. The book really takes quite a few pc turns out of nowhere for no reason other than to be preachy.

Interesting behind the scenes info

The voice actors were laughable. I literally laughed out loud each time they said their names. Could’ve done a lot better with the voices it really took away from the book.

The narrators did a great job. But it would've been much much better to have the cast and the crew reading their own lines.

Skip the Audio, get the hard copy

This is the first Audible book that I’ve honestly been disappointed by. The content was great and any true fan of The Office will enjoy the behind the scenes insights. But the actual performance of the book was very distracting. They obviously couldn’t get all of the actors and writers quoted in the book to do the audio, so instead they have voiceovers trying to imitate them and it often goes so horribly wrong that it ruins the experience. The less said about the Idris Elba impression the better.