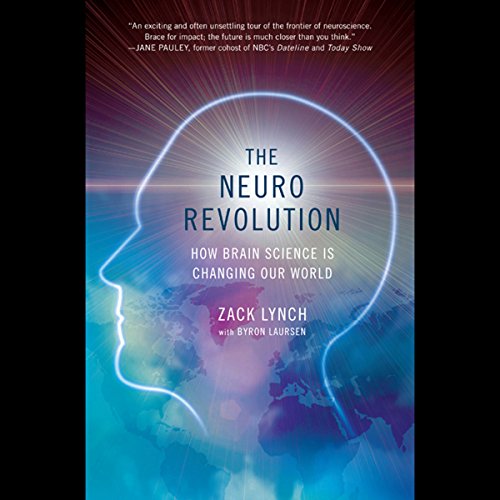 Author Zack Lynch got interested in neuroscience after a bungee-jumping misadventure left him with a serious back injury. After years of pain, then-new MRI technology helped diagnose a ruptured disk in his spine, leading to a successful recovery and allowing Lynch to get back to the slopes with his snowboard just a few months later.

From this opening anecdote forward, Lynch’s energetic personality and his enthusiasm for neurotechnology spill forth throughout The Neuro Revolution, as he crafts a wide-ranging forecast for how neurotechnology will impact virtually every aspect of society in the future — a future he calls the “neurosociety”. Narrator L.J. Ganser — who compares narrating a well-written book to good surfing — is a perfect match for Lynch’s consistently excited, but conversational tone. Ganser’s voice is lively but controlled, almost persuasive in its effortless delivery. Through Ganser’s reading, the book’s quick, garrulous language maintains a consistent, pleasant flow.

Brain imaging is a recent technology, but one Lynch believes will revolutionize the way humans conduct law, marketing, and finance, and the way we understand religion, art, and social groups. Lynch contextualizes each of his projections with a background in the field and general explanation of how neuroscience intersects with each topic. The chapter on law, for instance, places brain imaging within the larger discussion of the role of scientific evidence in criminal cases. Lynch discusses the history of lie-detection devices in the justice system before exploring the possible applications of EEG and MRI technologies in discerning truth. As in his exploration of other new neuro-fields, Lynch’s forecast includes a warning of the possible misuse and abuse of brain imaging in determining exactly what, or how much people know.

The Neuro Revolution is a fun, intriguing listen for anyone who enjoys thinking about the potential applications of emerging technologies. While it does not delve into any specifics of brain functioning, or provide an in-depth review of current research in brain imaging, it does present a well-researched, market-oriented glimpse into the future role of a powerful new tool. —Emily Elert

History has already progressed through an agricultural revolution, an industrial revolution, and an information revolution. The Neuro Revolution foretells a fast approaching fourth epoch, one that will radically transform how we all work, live, and play. Neurotechnology - brain imaging and other new tools for both understanding and influencing our brains - is accelerating the pace of change almost everywhere, from financial markets to law enforcement to politics to advertising and marketing, artistic expression, warfare, and even religious belief. The Neuro Revolution introduces you to the brilliant people leading this worldwide transformation, taking you into their laboratories, boardrooms, and courtrooms for a unique, insider's glimpse into the startling future now appearing at our doorstep.

From foolproof lie detectors to sure-fire investment strategies to super-enhanced religious and aesthetic experiences, the insights and revelations within The Neuro Revolution will foster wonder, debate, and in some cases consternation. Above all, though, they need to be understood by those who will be most affected - all of us.

"The exciting news is tampered by warnings that such devices could also be used for 'cultural or economic bondage'. Lynch is passionate, knowledgeable and fully engaged with the world of neurotechnology, and his overview makes absorbing material." ( Publishers Weekly)
"When I started reading this book, I thought Lynch's observations were rather hyperbolic. By the time I finished the book, I was stunned to realize that his points are not only rational but of urgent importance. Avoid reading this book at your peril." (Vint Cerf, Chief Internet Evangelist, Google Inc., also known as the "Father of the Internet")

The author is very enthusiastic about how Functional Magnetic Resonance Imaging (FMRI) will create a new epoch in law, in business, and in medicine, but spends too much time explaining familiar ideas and concepts.

The author made sure that his concept--one concept--was very easy to follow, at the expense of boring readers with knowledge of the subject gleaned from just magazines and newspapers, to say nothing of those readers who may have learned more.

This is the third or fourth book I've listened to in which the author claims to have known absolutely nothing about a subject before researching it intensely for the purpose of writing a book. One can learn a lot of fascinating things from the outside observer's point of view, but also be surprised at an author's missing some essential point or getting an important fact wrong. I felt uneasy as I listened to this author, because he draws gigantic conclusions based on little evidence and seems to start with even less than a literate person's understanding of different fields. I felt like he was an untrustworthy first person narrator.