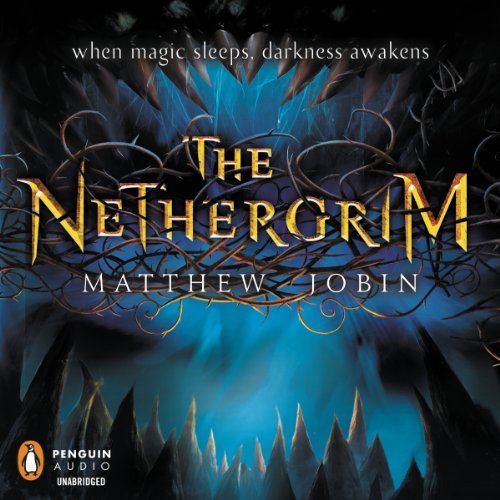 The Next Great Fantasy Epic is here! For fans of Ranger's Apprentice and the Chronicles of Narnia.

Everyone in Moorvale believes the legend: The brave knight Tristan and the famed wizard Vithric, in an epic battle decades ago, had defeated the evil Nethergrim and his minions. To this day, songs are sung and festivals held in the heroes' honor. Yet now something dark has crept over the village. First animals disappear, their only remains a pile of bones licked clean. Then something worse: children disappear. The whispers begin quietly yet soon turn into a shout: The Nethergrim has returned!

Edmund’s brother is one of the missing, and Edmund knows he must do something to save his life. But what? Though a student of magic, he struggles to cast even the simplest spell. Still, he and his friends swallow their fear and set out to battle an ancient evil whose powers none of them can imagine. They will need to come together - and work apart - in ways that will test every ounce of resolve.

In a story reminiscent of the Ranger’s Apprentice epic and the Chronicles of Narnia, Matthew Jobin weaves reality, magic, and adventure into the next great fantasy phenomenon.

great performance but overall the story is bland.

great performance, overall story was sort of bland. but did enjoy the book and is worth a listen.

With a slow start. the story doesn't pick up pace until the half. i am curious about where book two will lead.

Would you listen to The Nethergrim again? Why?

I will definitely listen to it again because it is so well written and narrated, and now I want to go back through the story to really give it a "new perspective" listen. When I started listening I expected it to be the same old fantasy story that moved along at a predictable palatable pace. Was I pleasantly surprised.

The scary parts really are terrifying, not because they're frightening but because the play on our fears which make them terrifyingly wonderful, and it is unpredictable! I didn't expect the characters to be so endearing, and when their gifts begin to show up it makes them all the more beautiful. I really enjoyed the opportunities they had for making choices, and the follow though with the consequences (even though my heart ached more than a couple times)

My favorite character was Kathrine because I thought she had a generosity and strength of spirit that seemed natural and full of grace. But I was also taken aback by the Thorn Beast..it was scary

The story centers around Edmond, Katharine and Tom (kids about 13-14), and Katharine’s father who a generation ago was one of three survivors who fought the Nethergrim. The characters are well developed and the children have believable angst, idealism, and dreams with just the right amount of heart and soul. The adults run the gambit which makes the scenarios believable and at times nearly unbearable.

The Nethergrim is a great book, I have already reviewed the print version. I purchased the audio version because I like to listen to audiobooks and podcasts on my commute to work, and so far I have been very pleased with the quality of the narration. I'm still listening so I will update this review when I have finished.

Life in the 1500 does not equal Life today

This was a mediocre tale wrapped in way too much exposition. Unless there is a series, which I doubt, this moved slower than a snail on a turtle. Several of the "action scenes" were slow and the basic story of some demonic creature was basically a reason for a love sick boy to never get his girl and for the girl to never get the other boy - so basically a Love Triangle and NO ONE WINS. There is a strong message of Friendship, which is important; however, I would not recommend this to my students. It seriously is slower than a discharged jazzy cart. I can see 4th - low 6th grade getting around this book, I am kinda disappointed due to the first two chapters really took off.