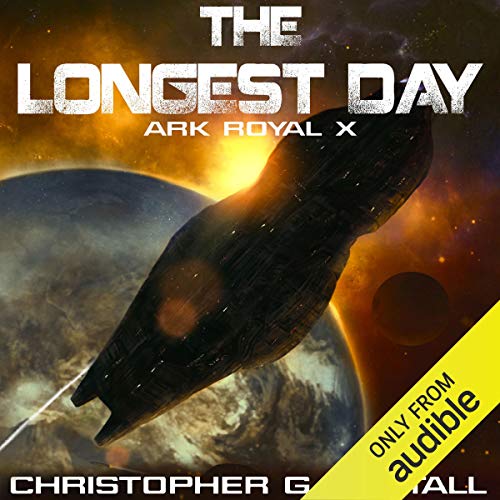 A stand-alone novel set in the Ark Royal Universe!

The first major alien offensive against Earth has been blunted, winning humanity time to deploy new weapons and prepare new tactics as Earth's space navies prepare to take the offensive. But the enigmatic aliens have plans of their own - a full-scale attack on Earth that will either win the war in a single stroke or lose it.

The stakes have never been so high. The fate of humanity itself is in the balance. And, as battle rages across the solar system, as humanity finds its back pushed firmly against the wall, millions of people - military and civilian - struggle for survival, knowing that victory will come with a very high price....

And defeat will be the end of everything humanity holds dear.

more like 2.5, story goes back to the bombing of earth by the tadpoles and the stories of some of the people caught in the attack

this one is a miss!

yes it was the longest day and book

I absolutely love the ark Royal story, but Christ I do not like the side characters whom in my opinion, take up way too much of the story. unfortunately this continues on in the following books, where politics and less interesting side characters are the barbone of the storyline. please go back to the thrilling days off the first ark royal books, and not this political semi sci-fi.

The "Molly" sequences were overdone. It seemed as though you were trying to write for the sake of sensationalizing. This type of writing only serves to make your book what we used to refer to as a "dime" novel. I did not like this book in the collection.

I just wish this book would have came earlier in the series. Filled in a lot of unanswered questions. Tells the good and bad of people when in bad situations. Also a lot of the side details that you might have been wondering about.

If you delete mentions of:

Then this book would be about half its length.

I enjoy the “ark royal” series though I don’t enjoy his other stuff. His nutty libertarianism is too rampant in the rest of his work. I hope he’s not going to ruin this series with more mediocre books like this.

bad and not part of the main story arc. seems like a needless cash grab by the author.

This book shud never had been made, compaird to rest of the Series. The story is just to thin.

couldn't enjoy this book. I'm listening at 2.55x speed and it's not fast enough. this book is just bad.

must end this war!

Story of what happened to Molly is just deserved, now its to late to help her children,who are saved and tajen in by 1st Space Lord Firtzgerald