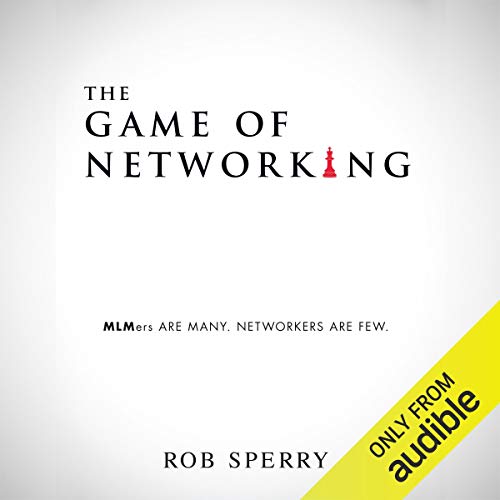 The Game of Networking: MLMers Are Many. Networkers Are Few.

Rob has come up with 3 1/2 Laws that will enhance your network marketing skills to increase sales, revolutionize your relationships and build a referral engine.

The top inventors, visionaries and mavericks all used networking to launch and leverage their companies. Whether it was Thomas Edison networking with Henry Ford to put his batteries in Ford's cars, or if was Steve Jobs networking with George Lucas to acquire Pixar, or social change like Bill Gates and Warren Buffet networking and creating the Giving Pledge, which has generated more financial contribution than any other charity in history — these visionaries used the 3 1/2 Laws that I illustrate in this book. You will benefit in the same way they did, to create lasting change, exponential growth and massive success.

Ce que les auditeurs disent de The Game of Networking: MLMers Are Many. Networkers Are Few.

This book captures so much without sounding like just another how to book. The authors understanding of connecting with people is vast and legit. So many nuggets!

A bit too cheesy for me. Some ideas are good, other seem out of a sitcom, and some of the "real life" situations he comes up with do too. I'll take the positive out of this book, but I think there are much better ones around. Will keep looking.

halfway through the book, I started putting the principles into practice. when I did I immediately started feeling like a better human being.

Networking Really Is For Everyone!

Rob Sperry hits a home run with his comfortable performance, spot-on and timeless principles, and abundance approach. One of the best listens on the subject I've encountered! Will definitely seek out more of his content.

This book has given me such great advice on how to advance my network marking business! Thank you Rob for all your inspiring ideas!

absolutely loved all of this.!!! A must!

This book was easy to follow,so much insanely helpful information in such a quick read! I listened on audible and it was awesome! I love the tips and tools offered and the way he mixes it in with fun real life stories!

Excellent information for the basics of networking. Easy steps to use and perfect. Thanks Rob for taking what I was thinking as a challenging skill and making it bite size portions to understand and implement.

Great Book with Principles Applicable In Any Indus

Great content. Worth listening to. Applicable in any sales related position as well as in any situation that involves people

Finally, a worthy book on Network Marketing in a few years.

Network marketing tends to be considered the step child. However, it has provided benefits, dreams realized, and financial security for many.

This book helps you take your business to the next level if you’ve been in business for a while. If you are new in network marketing, it is a must read.

It has been two or three years since I’ve read a good network marketing book. I will be gifting this book to my team this year for Christmas.

No matter where you are in your network marketing career, you will benefit.