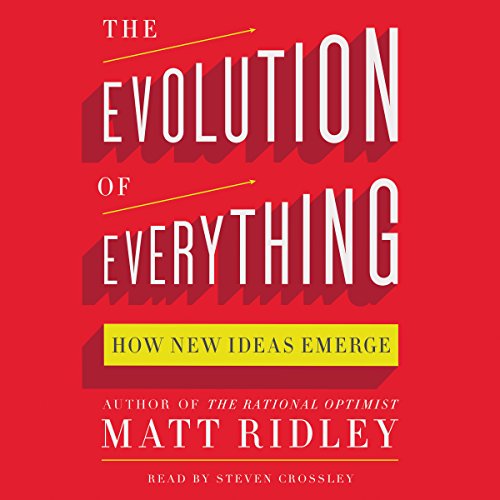 The Evolution of Everything

The Evolution of Everything

The New York Times best-selling author of The Rational Optimist and Genome returns with a fascinating, brilliant argument for evolution that definitively dispels a dangerous, widespread myth: that we can command and control our world.

The Evolution of Everything is about bottom-up order and its enemy, the top-down twitch - the endless fascination human beings have with design rather than evolution, with direction rather than emergence. Drawing on anecdotes from science, economics, history, politics, and philosophy, Matt Ridley's wide-ranging, highly opinionated opus demolishes conventional assumptions that major scientific and social imperatives are dictated by those on high, whether in government, business, academia, or morality. On the contrary, our most important achievements develop from the bottom up. Patterns emerge, trends evolve. Just as skeins of geese form Vs in the sky without meaning to and termites build mud cathedrals without architects, so brains take shape without brain makers, learning can happen without teaching, and morality changes without a plan.

Although we neglect, defy, and ignore them, bottom-up trends shape the world. The growth of technology, the sanitation-driven health revolution, the quadrupling of farm yields so that more land can be released for nature - these were largely emergent phenomena, as were the Internet, the mobile phone revolution, and the rise of Asia. Ridley demolishes the arguments for design and effectively makes the case for evolution in the universe, morality, genes, the economy, culture, technology, the mind, personality, population, education, history, government, God, money, and the future.

As compelling as it is controversial, authoritative as it is ambitious, Ridley's stunning perspective will revolutionize the way we think about our world and how it works.

for those not to be afraid to learn the power of spontaneous order across the history of human kind, till he age of the internet.

A "must read" on how the world really works.

Some may find this material a bit long and dry because the it requires you to really listen and think deeply to get the most out it. Some people don't want to have to think, but if you do make the effort, you will find yourself rewarded and become very informed and enlightened for your effort.

The range if topics covered is broad so as soon as I finish this review, I will be listening to it a second time to be sure I didn't miss any important points. Though not required, you may find it useful to get another book by this author "The Rational Optimist" which has different but complimentary information that helps build a fuller picture of the author's ideas.

Would you listen to The Evolution of Everything again? Why?

Yes, I am in the process of listening and reading it a second time now. At the age of 79, I sometimes fall asleep while listening so I miss some parts. Not that Ridley's book is boring, but that I might need a nap even in the middle of a terrorist attack -- or something.

Having taught evolutionary ecology at the graduate level, Ridley's expansion of the idea of evolution to "everything" -- including morality, religion, goverment, etc. is a fascinating, testable hypothesis worthy of further study. It will drive incipient and active tyrants into a frenzy.

Have you listened to any of Steven Crossley’s other performances before? How does this one compare?

No. The "English" accent was sometimes difficult to hear, but otherwise well-done.

If you could give The Evolution of Everything a new subtitle, what would it be?

Why "Creationism" is Irrational

Many thanks for a job well-done.

excellent overview of a view of societal evolution

I enjoyed this book with its extensive review of examples of societal evolution from history, economics, politics, science, and all facets of life.

More discussion of the impact of the asymmetries of power in society would strengthen his argument.

well worth the investment in time.

Another Reason to be amazed at Darwinian Evolution

I have always loved Datein's Theory but my eyes were really opened to see how it applies to almost everything. Especially the chapters on how governments mess up what they try to design instead of getting out of the way to let the small interactions between individuals evolve the processes. The chapter on the developement of the 2008 economic crises was very illuminating.

Amazing how the predominant theme of evolutions stands out in all forms of life, human or otherwise, bar none. In it are history lessons, morality, and the age old struggle of life to continue unabashed for the good of the individual and thereby the good of the whole vs the corrupt powers that wish to control others for their own perpetration and gain. Let life evolve!

Good book but a little disappointing on depth

I just finished The Evolution of Everything and it was hard to stop listening at times. I will re-listen to it. There were many good spots that I found educational and thought provoking. However, there were also several chapters that became more political commentary on current issues rather than an indepth exploration of the "evolution" of the subject. It could have been that Mr. Ridley did not want to lose his audience in the weeds of history, which I understand. Still, I would have preferred more historical perspective. Overall I found the book quite useful and informative.

smug and arrogant in the delivery of a fairly smug topic. the content itself was interesting. disagreed with some assessments, but over all fairly convincing and well argued.

Found the content fascinating. However, the narrator couldn't have been less fitting for the book.

Liked the new interpretation of cause and effect. It stirred new ideas and drove me to imagine an alternate narrative. One has to be careful however to adopt a new world view based on a fast and loose explanation of much of recorded human history (i.e. religious history). Overall, this author’s identification of evolving human concepts and natural systems is fascinating.

This great book will make you think twice next time you start making grand plans.

There's so much wisdom here that your head will explode.