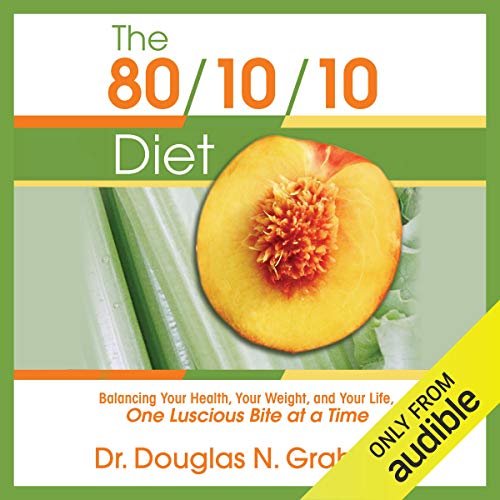 After more than 5 years of intensive work the definitive guide to the 80/10/10 Diet is here! Get your hands on the latest audiobook by Dr. Douglas Graham, The 80/10/10 Diet: Balancing Your Health, Your Weight, and Your Life One Luscious Bite at a Time. If you have struggled with staying raw, would like to lose weight, or change your life for the better, look no further than this groundbreaking audiobook.

The No Compromise Truth

I have been studying diet, nutrition, health for fifty years. In 1972, I read Arnold Ehret's "Mucusless Diet and Healing System" and the Murray Rose book, "Faith, Love and Seaweed" and became a raw fooder for three years living in Southern California. Returning to Texas and to the diet and family that reared me, I abandoned the truth of Arnold Ehret's 1922 book. Ehret didn't have the science to back his teachings but had direct, first-hand experience on himself, desperately seeking health in a diseased body.

Myself, out of desperation, at age 72, due to lack of vitality, strength, energy, motivation, re-read Ehret. By accident, 80/10/10 appeared on an Amazon display as a similar read. I received it as an audio book (I recommend it in audio) and have given three gifts to share this no compromise nutritional truth. Graham's 80/10/10 has the science to substantiate the truth on the many food prorams circulating. In the same manner as the book, "Improving on Pritikin," 80/10/10 is "Improving on Ehret." 80/10/10 trumps other high carb/low fat diets advocated by John McDougal, Dean Ornish, Pritikin and others.

Douglas Graham has a background as a coach as well. My granddaughter is a long distance runner on scholarship at Rice University. I gave her Graham's other book on sports performance and diet.

In two weeks, I have already begun to experience a turn around in the areas of my aforementioned desperation. At the same time, I am fighting enormous battles with my food preferences/fetishes/addicitons. Talking the talk is one thing. Walking the walk is quite another. But I am convinced and convicted, anything other than Graham's 80/10/10 raw vegan diet is, "playing house," tricking oneself to live a little longer to live a little wronger. "The accepted diet of man is the tragedy of life," to paraphrase Arnold Ehret.

As an audio book on all my devices utilizing a bluetooth headset, I listen to the book while walking my dog, driving a car and lyng in bed before falling asleep. I relisten to the chapters over and over to comprehend the science and be able to share and articulate this knowledge as well as encourgagement to overcome the obstacles.

Best audio re ad book ever. One feels like it's Graham reading it. Trippingly on the tongue, Barry doesn't miss a beat, reads with a rhythum and punctuation as well as a conviction of believing this message. Hearing a book and reading one are different learning processes. Multiple hearings are necessary (as are multiple-readings at my age) and appropriate to retain and digest the message. At low ebbs and times of discouragement, the re-listening serves as inspiration and overcoming.

I indeed had an extreme reaction to 80/10/10, lamenting the many friends with ailments such as diabetes and family who will not hear the argument or be capable of practiciing the truth contained in its pages...simple as it is. I lament the public at-large who will not be able to embrace this teaching for a myriad of reasons."Broad is the path and wide is the gate that leads to destruction.

Thanks to Douglas Graham for refusing to "hedge" or compromise on the most important issue in life, one that we have been taught ignorance about: What We Are To Eat.

This book covers the topic well without getting bogged down in the technical side of things. Lots of information and details are provided in an engaging style. I would recommend this book to anyone who is seeking better health and a fuller life.

Best Book Ever on Diet

I really love the organized way the author wrote this! Made it so easy to understand the different components of the LFRV lifestyle.

Eat To Live by Joel Fuhrman, MD because Dr Furhman writes about nutritional density...eating fresh raw food in its natural state and getting the most nutrition for the calories eaten. 80-10-10 advocates this too in a format that answers questions that many have.

I appreciated the explanation of what really causes diabetes.

This book is for anyone that wants to live a vibrant healthy life. A life without all the typical health problems associated with aging. This book also gives the reader the ammunition to answer the nay-sayers in their lives as the book dis-spells many myths associated with eating raw/vegan.

There is no denying this information.

Could not wait to get through this book. I also have the printed version but was too busy to read. Excited to move forward incorporating these things into my diet until eventually completely 80/10/10.

Very informative without being pushy or condescending. The author reports solid factual information and then asks the reader to make their own decision to change.

Read this book if you care about your health!

The information in this book has literraly changed my life in just a matter of days of applying Dr. Graham principles I am noticing weight loss, increased energy, stamina and better sleep. For years I have battled with finding the right diet who knew it could be so simple. If you care about your health you'll read this book!

This is a life changing book! I'm battling with diabetes and for the first time in 10 years have allowed myself fruit and am healthier then ever before. Dr Graham explains in a common scene way what our biological natural diet should be. It's amazing what happens when we stick to what nature intended. A must read for sure!!!

great book for laying a foundation in raw vegan living. Fruit based is the way to Go

very informative and logical, simple to comprehend and execute. love the holistic approach and candid opinions.