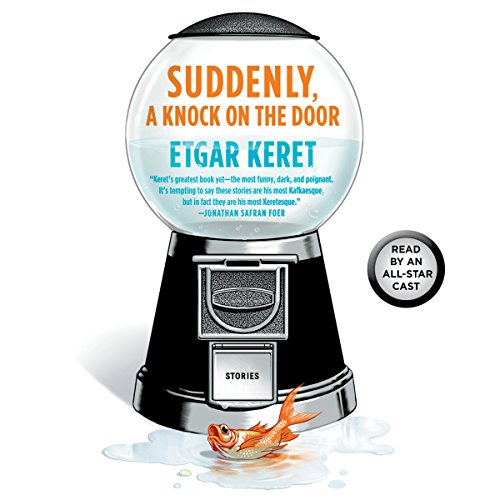 Suddenly, a Knock on the Door

Read by an all-star cast and featuring a bonus story special to the audio edition, Suddenly, a Knock on the Door is a one-of-a-kind audiobook.

Bringing up a child, lying to the boss, placing an order in a fast-food restaurant: in Etgar Keret’s new collection, daily life is complicated, dangerous, and full of yearning. In his most playful and most mature work yet, the living and the dead, silent children and talking animals, dreams and waking life coexist in an uneasy world. Overflowing with absurdity, humor, sadness, and compassion, the tales in Suddenly, a Knock on the Door establish Etgar Keret—declared a "genius" by The New York Times—as one of the most original writers of his generation.

Spices of imagination behind the door...

If you could sum up Suddenly, a Knock on the Door in three words, what would they be?

What was one of the most memorable moments of Suddenly, a Knock on the Door?

I was really surprised by the Ari story. I loved the details and the crazy turn that the story took. Really Really loved it!

I loved the different variations of tones and the accents that each narrator brought to each story. It was easier to imagine with the different voices.

Who was the most memorable character of Suddenly, a Knock on the Door and why?

I would say the characters of Ziki and Urgon. People are always battling inside with the person of who they would like to be versus who they actually are. This story artistically shows the difference between the personalities and how a person can try to hide it, but someone will be there to unveil it at one point in your life.

Really great book! Loved that the stories were so imaginative and challenged me to think about how things end and how we portray ourselves to others.

I would recommend this book to a select group of friends. It is certainly not for everyone. It is very slow...

Would you recommend Suddenly, a Knock on the Door to your friends? Why or why not?

I would recommend this book to a select group of friends. It is certainly not for everyone. It is very slow...

The narrators's perfomance were exceptional! Ira Glass and David Rakoff, anyone?!?!

Could you see Suddenly, a Knock on the Door being made into a movie or a TV series? Who should the stars be?

If this book were made into a movie or TV series, I could see it being an independent drama or just a dark, artsy flick.

What made the experience of listening to Suddenly, a Knock on the Door the most enjoyable?

loved the short stories and all the different narrators

What was one of the most memorable moments of Suddenly, a Knock on the Door?

the irony of the stories

If you could take any character from Suddenly, a Knock on the Door out to dinner, who would it be and why?

excellent, check it out if you are looking for something different

Yes, I would and have recommended everything Etgar Keret has written to friends. Keret writes beguiling, funny, often frustratingly short, stories. Regular "This American Life" fans will have heard him weave a tale or two and will probably have been left wanting more every time. Although most of his short stories could technically be classified as absurdism or fantasy, Keret uses absurd situations to explore the parts of the human condition that are not that frequently explored. They remind you how exciting it is to think about such things, and make you wonder why you don't more often. Of course, some of them more than others, as is always the case with short story collections. And some of them really are too short! But they'll leave you eager for another collection.

I like that Keret never hits you over the head with the morals to his peculiar fables. He invites and encourages the reader to think, and interpret, and work a little! And his special seriocomic take on the world recognizes the humor that really does run through even the darker, lonelier crevices of the human condition.

I think that Keret knows that the human voice really breathes the greatest life into his stories. Of course I could just be under this impression because I heard a number of his stories on "T.A.L." before I read them. I must say that, although these actors do a fine job (Stanley Tucci is just always a treat in whatever he does), Keret's own delivery of his stories on Ira Glass' show is quite a bit more enjoyable. But the musical interludes between the tales are pleasant; and these actors' changing voices delivering these odd tableaux, and their changing tones, are much more fun than just my own. But if Mr. Keret would please not be embarrassed about his wonderful, nicely sleepy Israeli accent, and record his next Audible collection himself, I will not miss the famous narrators. Also, this is a perfect selection for an evening walk in crisp air.

listen to again and again

Difficult to explain as each story is different. so very different from each other and from others. But all leave you thinking, and the ability to listen to this book again and again, all while never losing its momentum, makes it a great read (listen) every time.

Loved every story, the perfect circumscribed to my morning commutes, nightly jogs and general moment of quiet contemplation.

Magical stories told by delightful actors and writers. Each one is like discovering a miniature new world.

More of a buffet than a meal

There is nothing really wrong with this collection. Etgar Keret is a great writter whose short fiction kind of reminds me of Kurt Vonnegut (without the heart or clear plot of Vonnegut stories) in the playful way he plays with language and absurdities of modern life.

However, I have difficulty recalling a single story or even a theme that one might consider to tie these stories together. It felt like I ate a decent buffet meal and nothing really stood out. I still would reccomend this collection as it will entertain you and the stories are real smart and accesible but regretably I was just left feeling empty. I would definitely listen to another Keret collection as he does have an original voice and does manage to create flash/absurd fiction with some semblance of narrative for the reader listener to grab onto (as opposed to Donald Barthelme). I think if you do listen to this collection you should stick to one story a day; that might be a better way to appreciate the work I kind of chugged this work down so maybe that is why I have a hard time grasping anything from it.

I loved the narration and especially the musical interludes between stories. AUDIBLE PLEASE DO THIS MORE OFTEN FOR SHORT STORY COLLECTIONS:

Would you try another book from the authors and/or the narrators?

I have read previous books by Etgar Keret and liked them very much, but this book does not work well as an audiobook -- the stories are too dense and confusing without referring back to certain passages.