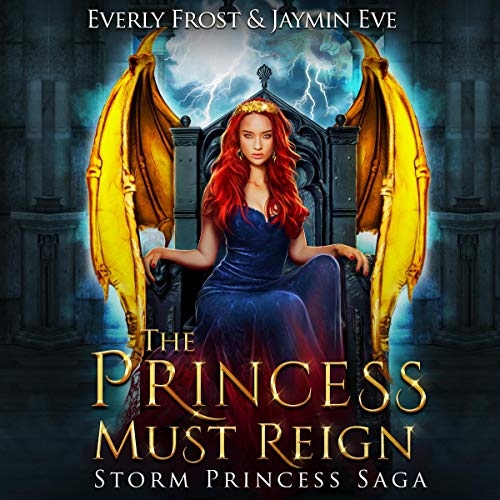 Storm Princess 3: The Princess Must Reign

The battle begins. The storm will rage.

In a world of elves and gargoyles hidden beneath the streets of Chicago, Storm Princess Marbella Mercy has awakened a deadly power in a bid to free Baelen Rath from the savage gargoyle king.

But the consequences of her actions are far more significant than she could have known, threatening to tear the gargoyle kingdom apart and leave Marbella vulnerable to an elven attack.

Among her elven enemies is a dangerous new sorcerer whose powers rival her own. Ripping Marbella away from Baelen, the sorcerer ignites a war that threatens to spill over into the human world.

When the battle between the elves and gargoyles begins, only one thing is certain - the princess must reign.

Don't miss the epic conclusion to the Storm Princess Saga. This is a full-length fantasy novel.

This is one of my favorite series! I picked up the first book because it was free and I fell in love with the story more and more. The characters were developed so well and the story line flowed beautifully. Absolutely love! And the narrator did amazing!

Teen romance novel, not great, not horrible. Fine for what it is, but ties it's self in knots trying to keep the main character to some weird form of the ideal woman. in general lacks nuance.

the ending was perfect.

these books are forever in my heart. and the bravery shown will be in my dreams forever.

One of my Favorite Series

I loved reading this when it first released! Now having listened to the series I have fallen even more in love with it! The narrator did such a beautiful job!!

A great ending to a wonderful story! I hope this world is revisited at some point.

Amazing finish to an amazing story! Prepare to have your heart burst with anger, sadness, joy and awe!

This is the conclusion to the Storm princess trilogy and I would say it’s the better of the three. The author seemed to get more experienced and wrote more maturely than she did with the first two. The author felt the need to directly tell us the story at times instead of painting a picture with her words and letting the reader draw the correct conclusion or the answer.

The concept of having a whole world underneath Chicago with supernatural beings inhabiting it was a little far fetched but I don’t usually let what doesn’t make sense deter me from reading or in this case, listening to a story. The story kept me wanting to know how Marbella was going to get out of this latest mess and make everything peaceful again. Overall this story did its job of drawing the readers in and making them care about the authors. I would recommend this book to other fantasy lovers.

I love these books

The story was beautiful from start to finish. couldn't stop listening. The narrator was wonderful.

Incredible narration of a riveting story. Great job on the male voices by the female narrator. Loved the progession of the story throughout the trilogy. Well crafted and simply wonderful.