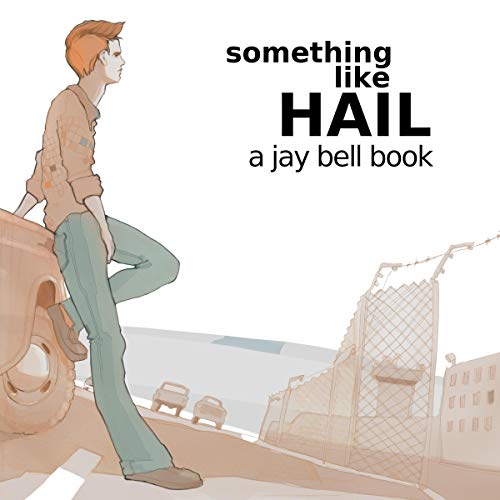 When life closes each door and the world has taken away every opportunity, sometimes, it's up to us to make our own luck - and to give ourselves a second chance.

Noah Westwood is tired of life on the streets, so he turns to Marcello Maltese, a man who owns a small media empire...and a few covert businesses, such as an escort service. Noah volunteers for this, but he's playing a dangerous game. A secret from his past could turn his new friends into enemies, and he isn't sure he can perform the duties he signed up for, especially when he's more interested in falling in love than hopping into the beds of his clients.

This is complicated further when his hunky coworker, Harold Franklin, seems to be interested. Or is he?

Noah is off the streets, but he'll have to travel down many roads on his quest to find his happily ever after.

Something Like Hail introduces a new character to the Something Like... series, one whose life is intertwined with the previous stories in unexpected ways.

being a fan of Jay Bell's work, I was more than looking forward to this book. being raised as a southern Baptist it was difficult to read, but worth it to see it through. love Jay Bell's character. you feel you know them and want the best for them, and thank you for making a cute Asian boy desirable. about time people see we're adorable

it was nice to get some closer on the whole Ryan debacle. I enjoyed that even he was able to get a somewhat happy ending. Noah and Harold ending up together would have been to easy, although if you have Something like Forever, then you do hear them mentioned again. So, you never know what the future holds. I can understand how some fans of the series could be turned off about the escort storyline, however, this allowed us to get more information on Marcello, which is always fun.

Nothing special. I get that Jay Bell has had some great hits, so it was wise for him to try to keep it going. There was nothing special about this book, in my opinion. The narrator did a great job voicing Marcelo and a few other characters, but his voice for Felix was awful! I couldn't even listen. It was so nasally. I'll pass on the rest of the series.

The Love Story Was The Least Interesting Part

Similar to Something Like Winter (for me), the least interesting part of this story was the actual love story. I enjoyed everything else, but sometimes the love gets so sappy that it feels awkward. But even Winter didn't make me want to cringe like this one did, which is disappointing because of the 7 audiobooks I've listened to in this series, only 2 of them have ever made me feel like that.

Hail is a Good Stand Alone

I felt Hail was a very well done story that brought new and interesting characters to this universe Bell has created. It also kept the series fresh and at the same time it was great look at the other sides of the LGBTQ community in regards to homelessness. I love this series.

Great start but a disappointing ending. Definitely wishing I could recover time spent. I'm a fan of the series, but not this volume.

this book had so much potential but I felt it was rushed. it started off very good going in a interesting Direction, but then Twisted Metal and especially the end it just felt like Jay Bell was trying to meet a deadline. every time I thought it was going to get me back to that sweet spot and explain unanswered questions it didn't. I love this series and all of the characters but I must say I feel like this book could have been omitted from the series.

I am a true Something Like...fan, listening to the whole series over and over. but, this book simply does not belong and somehow tries to make prostitution into a really great career choice. It does not go with the series.

Ugh!! Got to the book late after listening to the rest. Not sure if I remember any of the characters in the following books or at least not enough of them to remember. I really want to hear the rest of their story!! Any chance they get a spin off? Also, Marcello is my spirit animal...I need Marcello in MANY more books!!!