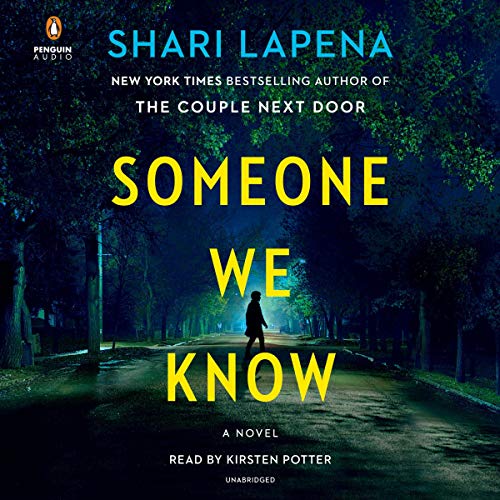 "No-one does suburban paranoia like Shari Lapena - this slowly unfurling nightmare will have you biting your nails until the end." (Ruth Ware, number-one New York Times best-selling author of The Woman in Cabin 10)

The new domestic suspense novel from New York Times best-selling author of The Couple Next Door, A Stranger in the House, and An Unwanted Guest, Shari Lapena

Maybe you don't know your neighbors as well as you thought you did....

"This is a very difficult letter to write. I hope you will not hate us too much.... My son broke into your home recently while you were out."

In a quiet, leafy suburb in upstate New York, a teenager has been sneaking into houses - and into the owners' computers as well - learning their secrets, and maybe sharing some of them, too.

Who is he, and what might he have uncovered? After two anonymous letters are received, whispers start to circulate, and suspicion mounts. And when a woman down the street is found murdered, the tension reaches the breaking point. Who killed her? Who knows more than they're telling? And how far will all these very nice people go to protect their own secrets?

In this neighborhood, it's not just the husbands and wives who play games. Here, everyone in the family has something to hide....

You never really know what people are capable of.

"Slyly plotted...Lapena skillfully maximizes suspense with her dual story lines that eventually collide, as well as some deft misdirection...many fans of domestic suspense will be satisfied.” (Publishers Weekly)

“Someone We Know is a tour de force of thriller writing. Shari Lapena proves yet again that she is the mistress of the pacy plot, cliff edge tension and menacing suburban claustrophobia. Fans will be delighted and if you haven’t read her books yet, then why on earth not?” (Gilly Macmillan, New York Times best-selling author of The Nanny)

Boring story, assault of toddler. Leave out the sex details.

An interesting story without having to listen to details of being felt up or sexual encounters would be great. “Someone We Know”, minimally held my attention, but I forged ahead, waiting for it too get better. It got worse. I definitely don’t want the image of a toddler being made to lay over a chair to be brutally tortured with a whip to intrude upon my mind. So disgusting , I hate to write it here. Get it out of my ear!
The husband in the story is s a vile man.
I wish I hadn’t wasted a credit on this one. Stopped listening as soon as the account of the child torture began.

What an AWFUL cast of characters !!

I almost can't believe I finished this book and it would be hard to review without spoilers. I am just glad that this isn't my neighborhood. Lousy story lousy people and even the narrator sounds angry no matter what she's saying

I have been listening to a lot of mediocre books lately, and 'Someone We Know' is no exception. We have a kid breaking into houses for reasons we don't really understand. He ends up stumbling over something he should not have, and things sort of spiral out of control. Sensitive information and reputations, jobs and criminal charges are at stake.

The problem is, it's boring. It's a great premise but it's short, undeveloped and just sort of blah.

Get this one on a daily deal- not worth the full credit.

Predictable but a fun ride

Predictable but a fun ride. Although I had guess the murderer close to the beginning of the book, the narrator had made this a fun listen. If you’re just looking for some light entertainment it is worth the credit.

I really love Shari Lapena’s novels. They always surprise me. This is her 4th novel and I was really excited for it as I truly was shocked at the ending of her 3rd. This one surprised me but not as much as the last. I ended up having the ending half right. It seemed to also end on a cliffhanger which I wasn’t expecting. So hopefully there will maybe be a second book coming. Or maybe it’s just supposed to be open to interpretation. Either way, I really enjoyed the book and I can’t wait to see what she does next. The narrator was also very good!

The narration was excellent and the writing was fast-moving. I throughly enjoyed trying to guess who the murderer was. The amount of potential suspects makes this book unpredictable!

If you've read and enjoyed this author's other books, this is more of the same. Domestic intrigue, unlivable characters, quick-paced plot, but ultimately predictable. Mindless entertainment. The narrator was good.

Totally Sucked Me In

Great story. The narrator was a little annoying, but the story grabbed me right away and I didn't see the end coming!

Lapena has done it again, another banger. She has me holding on to the end every time. Boy oh boy, this was a good story and plot. You never would have guessed who it was, Never. Chile, all over the neighborhood slut Amanda, I meant wife. All the husbands and friends were messing around with Roberts wife, but he wasn't innocent himself. Is there gonna be a part 2, because the way it ended, SHARI? #book38outof2019 #bookworm #whatsnext

I don’t get all the good reviews. It’s is a generic who-done-it at best. There is nothing in the book that makes you want to find out what happened. The characters are difficult to care about. The twist at the end was not a surprise due to the fact that I could barely remember who was who. Bland and boring. I am so mad I wasted my time since I couldn’t care less what the ending was and “Who-done -it”.