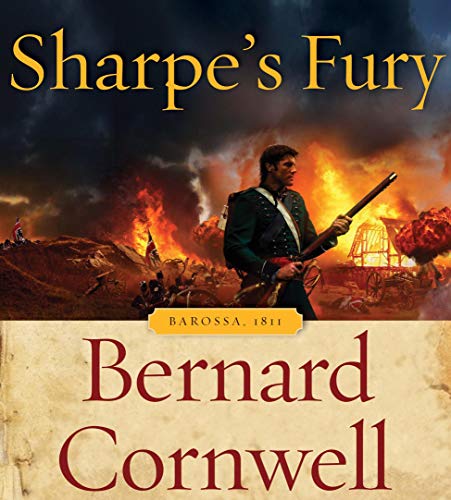 Richard Sharpe, a former private in His Majesty's army who now commands a company of riflemen, finds himself fighting his old enemies, the French, at the extraordinary battle of Barossa in 1811.

Sharpe has been sent by the Duke of Wellington on a mission to Cadiz, now the capital of Spain, to rescue the British ambassador, who happens to be Wellington's brother, from a spot of undiplomatic trouble. The city has been blockaded by the French but is supported by the British from the sea. It contains a rare mix of pro- and anti-British Spaniards, diplomats, courtiers, adventurers, and spies.

Sharpe's mission - complicated, undercover, and political - turns out to be completely different from the one on which he was sent. It brings him through the besieging enemy army to triumph in the battle of Barossa, where the British, deserted by their allies, defeat an overwhelmingly stronger French force.

Best Narration of all Sharpe Books

If you have enjoyed listening to the other books in the Richard Sharpe series, you'll like this one too. But what makes this particular recording so special is the voice of Paul McGann. He sounds just like Sean Bean's character in the Sharpe TV series.

Worst of the sharpes books yet!

I have listened to the previous 10 books and this is the worst one yet.
Worst reader of the 3 I have listened to.
First part is nothing but confusion. It a shame an unabridged version is
not available.

In an effort to maintain continuity and not miss anything, I listened. I should have saved the credit.

This is abridged without any mention of it.
The narrator is terrible. He can not bring either the Scots or the Irish to life. The book itself is good when you hear it all

This story needs a visual map to follow the action. At the end of Mr. Cornwell’s books he usually tells you what was real and what he changed for the story. This was missing.

Brief but engaging as Sharpe has another Wellington in his debt. Those without honor deserve no honor.

Wish I read the description first, abridged is not a story, get the normal version instead.

Make sure you want the abridged version before ordering this book. I wish they would have a prominent label stating this.

this book was a let down in away, But as everyone knows,"ABRIDGED " books stinks. the book would have been good "UNABRIDGED" but audible Let me down.

Would you ever listen to anything by Bernard Cornwell again?

Always, but never again will I buy a "ABRIDGED " book.

Who would you have cast as narrator instead of Paul McGann?

he was good but not as good a others.

If you could play editor, what scene or scenes would you have cut from Sharpe's Fury?

none it was cut off middle of a battle.

i would buy the "UNABRIDGED" to this book if it comes to Audible to see what i missed.

Would you consider the audio edition of Sharpe's Fury to be better than the print version?

yes I enjoy listening to the sharpe series as I drive to work.

What was one of the most memorable moments of Sharpe's Fury?

blowing up the bridge.

Which character – as performed by Paul McGann – was your favorite?