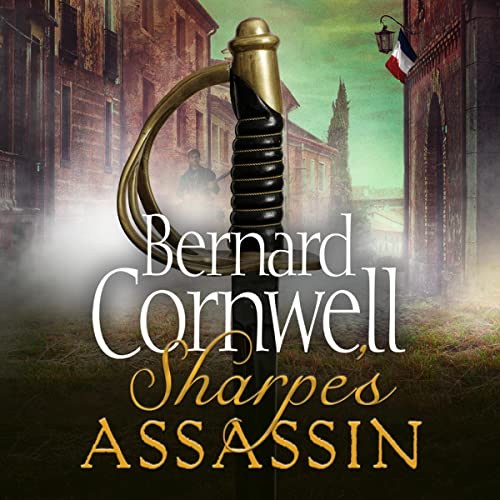 If any man can do the impossible, it's Richard Sharpe....

Lieutenant-Colonel Sharpe is a man with a reputation. Born in the gutter, raised a foundling, he joined the army 21 years ago, and it’s been his home ever since. He’s a loose cannon, but his unconventional methods make him a valuable weapon.

So when, the dust still settling after the Battle of Waterloo, the duke of Wellington needs a favour, he turns to Sharpe. For Wellington knows that the end of one war is only the beginning of another. Napoleon's army may be defeated, but another enemy lies waiting in the shadows - a secretive group of fanatical revolutionaries hell-bent on revenge.

Sharpe is dispatched to a new battleground: the maze of Paris streets where lines blur between friend and foe. And in search of a spy, he will have to defeat a lethal assassin determined to kill his target or die trying....

Sharpe’s Assassin is the brand-new novel in the best-selling historical series that has sold more than 20 million copies worldwide.

"The war was over. And Richard Sharpe was going to war." Like a warm blanket.

It's been 15(!) years since the last Richard Sharpe novel (Sharpe's Fury) and Cornwell's return to the Napoleonic wars and common soldier-turned British officer is like meeting an old friend and immediately settling into your old routines, in-jokes, and rhythms without missing a beat.

Sharpe's Assassin immediately follows the defeat of Napoleon at Waterloo (Sharpe's Waterloo) and newly promoted Lieutenant Colonel Sharpe and Sergeant Major (retired?) Harper are interrupted from burying their dead compatriots and summoned by the Duke of Wellington to storm a remote bastion/prison complex. This quickly reveals a larger plot device of the British trying to recover European artwork stolen by the French Army over the years and stored in the Louvre as well as a mission to stop a group of Bonapartist die-hards. This also has Sharpe reuniting with his former company commander and the man responsible for having him flogged as an enlisted man, Major Morris.

The action is kinetic and tight, the banter with lords and ladies is quick-witted and just disrespectful enough by Sharpe to keep things punchy, and angry-Sharpe remains a great literary joy. Going back into Sharpe's world invites inevitable comparisons to Cornwell's other long series, The Last Kingdom, and its main character Uhtred of Bebbanburg. On balance, Sharpe's world is so much more enjoyable. Uhtred and Sharpe are essentially the same character, but while Uhtred and his world are dreary, dour, and perennially gray, Sharpe and his world has a *spark* to it that makes the world, scenes (action and exposition), and characters feel that much more lively and therefore interesting.

Will Sharpe and Harper march again? Hard to say, but I had a wonderful time tagging along for the ride.

I was very happy to see another Sharp book come out. This was the first series by Cornwell that I started reading years ago. The author has the ability to create characters that are realistic and admirable. He brings the past to life as only a person who respects and loves history can. I believe that, with one exception, I’ve read everything Cornwell has written. He is exceptional and I recommend his work to anyone who treasures a good read.

Sharpe is so good because he is us...

When we hear Sharpe's voice through his narrators and we read his words on the pages, he is that mystical, channeled, being who manifests in the space between our (personal) grasp of history and a magical hero-inkling that we grok, sort of like we could have been there too.

There is no doubt that fans and listeners of the Sharpe series owe an extraordinary debt of gratitide to Frederick Davidson, Patrick Tull, Rupert Farley and, of course, Bernard Cornwell. They all have enriched our lives with amazing storytelling and fictional renditions of stuff we would not have otherwise studied had we been forced to as students.

Sharpe is part of us now...that makes me happy! And yet, when Dan died in the last novel "Waterloo," I cried my eyes out. I think Sharpe did too. Okay...we all did...thanks Cornwell...I forgot how to cry.

At first I wasn't thrilled at who was narrating this, but soon was caught up in the story and didn't mind at all. The story is good and I liked it. Fans of the series will enjoy it.

Sharpe is back, but should he be?

Always nice to get a new Sharpe novel, but there isn't too much point to this story - except to get an ending to Sharpe's story, which might make this book worthwhile. If you've read the previous novels, you'll know Sharpe will end up in any battle of the war, very often in a way that suspends belief. This time there is no major historical battle, but he goes to Paris instead and looks at paintings. There is a battle later on, and it's a thrilling one, but it seems completely unnecessary.

The main issue was with the narration, or rather the dialogue. Rupert Farley's narrating voice is fine, but all the dialogue is awful - sometimes he does a terrible Sean Bean impression, sometimes he forgets to do that. Sometimes he whispers, and sometimes he shouts. I don't know how accurate Wellington's accent is, but if anyone sounded like that and tried to tell me what to do, I'd run fast in the opposite direction. All Irish accents are of the "to be sure, to be sure" -variety (although they are the least irritating of Farley's accents), and the French accents are particularly horrible and sound like cartoon villains (as if Officer Crabtree had a few too many bottles of wine at Cafe Renee). At one occasion Lucille sounds like a sneering madwoman, and in the next she whispers softly. It's sometimes difficult to understand who is speaking, because the accents are so inconsistent. In the final battle the narration is more fast-paced, so Farley largely forgets to do the accents, and suddenly it sounds fine.

this story was absolutely spot on! loved the way it tied up a certain loose end and done nicely! in addition the story itself gave me insight into the occupation of Paris and the climate there immediately after Waterloo. I won't give out details to ruin it for you! Truly a must read!

last book of this series

ended as expected, as always a good book, steady pace from the narrator.
did not realize it was the last book as I believe there probably were others in between the 3 I have listened too. wish I could have found the others in order as I liked this character and his companions, finding the adventures easy to enjoy.

May be time for Sharpe to retire

Struggled to finish. But was entertaining. Sharpe got old and, like the rest of us has slowed down.

Welcome back, Sharpe! Intricate, fascinating and gripping story line right up there with Mr Cornwell's best in the Sharpe series, but most unfortunately detracted from by an ill suited narrator. Uneven voice modulation (one minute shouting loudly, another whispering inaudibly - especially the women), slurred articulation (at times it was hard to make out what he was saying), and, most important, wrong and annoying accent for Sharpe - Sharpe sounds dopey. Frederick Davidson got Sharpe's accent just right, not high born but still crisp and strong, reflecting Sharpe's increasing sophistication as a rising officer over the years. Mr Cornwell, please bring Sharpe back again with more brilliant stories but with a better and more suitable narrator.

I've read all the books and have seen all of the Sharpe's films. It is satisfying that this story has been written to tie up the lose ends. Richard Sharpe (& Patrick Harper) is indeed one of my most favorite historical fiction characters. Thanks Mr. Cornwell for creating such adventure and enjoyment!

Another good book about Richard Sharpe

An adventure wich has all the entertainment of a Sharpe Novel you cold wish for.