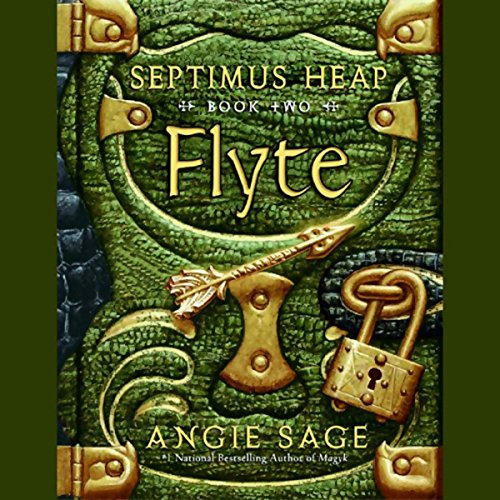 It's been a year since septimus heap discovered his real family and true calling to be a wizard. As apprentice to Extra Ordinary Wizard Marcia Overstrand, he is learning the fine arts of Conjurations, Charms, and other Magyk, while Jenna is adapting to life as the princess and enjoying the freedom of the castle.

But there is something sinister at work. Marcia is constantly trailed by a menacing Darke Shadow, and Septimus's brother Simon seems bent on a revenge no one understands. Why is the Darke Magyk still lingering?

Bringing fantasy to new heights, Angie Sage continues the journey of Septimus Heap with her trademark humor and clever details.

"Terrifically entertaining....Fans of the first book will be delighted with this sequel to Septimus's story." ( Voice of Youth Advocates)

Still good, but a letdown from book one

Angie Sage's second installment was still entertaining, albeit a bit more predictable while the characters were rather more irritating than enchanting, as in the first. But, I can't help wonder if it was the narration that changed things for me. Allan Corunder did such a phenomenal job in the first book. His voices were so riveting, entertaining, enchanting - it was hard for any of us to put the book down. This second narrator was okay - and that was it - just okay. I almost felt as if I needed to reacquaint myself with some of the characters, who seemed totally different than in the first book (example, Marcia was so solid and funny and quirky with her fascinating purple shoes in the first book; in the second, she seemed inept and downright irritating at times - and that to me really stemmed from the narration, not the writing). I miss Mr. Corunder's hilarious interpretations, and I wish I could hear him narrate for all the books. As it is, I'm not sure I'll go on with the series. There certainly isn't a delicious anticipation to get to the next in the series as there was in the first. - A bit of a letdown.

My son and I have enjoyed this series alot in the car and at home. Its a pleasure to hear or read something not truely predictedable to the letter. We fell in love with the first book and haven't looked back. We are looking for Sept's new adventures in the next one too. We hope you enjoy this little fun trip into fantasy like we do for our thrid time this year ;-)

There is one huge thing I would change about the book - I would include the narration for "What Happened Before . . . "! The Afterwords, for lack of a better term, are one of the more creative elements in Angie Sage's Septimus Heap series. I was looking forward to listening to it.

What other book might you compare Flyte to and why?

In some ways, Septimus Heap is a battle of magical good and evil in the vein of Harry Potter. However, where J.K. Rowling's novels become increasingly more mature as her characters and her readers aged, Septimus Heap remains age appropriate for younger readers throughout the series. Additionally, Angie Sage injects her books with more humor that helps keep the books from becoming too scary for most 8-year olds.

I loved how Gerard Doyle was able to create numerous, distinct voices, and I never was confused over who was actually speaking.

Was Flyte worth the listening time?

Yes. My only disappointment was the failure of the book to include the content after the final chapter. It definitely cast a pall on the remainder of my drive to work.

As you can tell from the rest of my review, I loved this book, loved the narrator, and my only disappointment is classifying the book as Unabridged. Shame on the publisher and the author for not noticing.

I really enjoyed the first book of the series, and it threw me for a loop when they switched narrators. I really enjoy Gerard Doyle, however, I had just finished the Eragon books he narrated and it was a little strange hearing the characters' voices from another series in this one. I would have given this book 4.5 stars because of that. However, the story itself, is fun and entertaining. And as always, I was looking for a book with no vulgarity or inappropriate language for very young children, yet interesting enough for me. This series definitely fulfill those requirements.

I kept thinking I was listening to William Joyce's"The Guardians" series - Gerard Doyle uses exactly the same style . Allan Corduner did such a good job on Magyk - I was excited to listen to him again. Why the change of narrator? Wrong choice.

Too Little Magical Magyk, Too Much Movie Action

In Flyte (2006), the second novel in Angie Sage's Septimus Heap series, eleven-year-old Septimus Heap (seventh son of a seventh son), is now the Apprentice to the ExtraOrdinary Wizard Marcia Overstrand, happily learning everything Magykal he can, cleaning the library, and dreaming of Flyte, "the Last Lost Art." (Sage uses bold font, capital letters, and archaic spelling to make Magykal things look special.) All is not well, however, in the Wizard's Tower in the Castle. An ominous Shadow has been shadowing Marcia and her ShadowSafe is taking much too long to construct. Worse, Septimus' eldest brother Simon, who resentfully ran away to live in the Badlands and learn magic from the remains of the Necromancer DomDaniel when Sepitmus and not he became Marcia's Apprentice, kidnaps the Princess Jenna (the Heap's adopted daughter), for some nefarious purpose. Without any support from the feckless adults around him, Septimus sets off to rescue Jenna. From there Sage tells a page turning story full of laughs and frights and action that you can imagine entertaining theater audiences.

There are moments of magical writing in Flyte, as when something moves up through the Marram Marshes "ice white in the moonlight," when a lab emits "a distinctive smell that reminded Septimus of burned pumpkin," and when, after a vivid description of the sentient Dragon Boat, Sage writes, "Deep in a locked hold, which no one had opened--not even Aunt Zelda--beat her heart, silent and slow." Unfortunately, despite all the Magykal Spells, Charms, Hexes, Balms, Potions, Artifacts, Wizards, Witches, and fantastic beings, such moments are rare and lost amid much uninspired writing. There are mundane similes, as when five different times characters drop or sink "like a stone" and as when a character is swatted into the air by a dragon tail "Like a baseball sailing out of the ball park," though there's nary a hint of the sport in the pseudo-medieval magical world. Some things even act as magic-mood breakers, like the Apprentice Belts that Septimus and Simon use like Batman Utility Belts.

At times Sage's suspense doesn't work because she signals what's really happening before the characters catch on, distancing the reader from their panic attacks (by, for instance, revealing that a pursuing cloud is white instead of black). Perhaps Sage is trying to make her book less scary for kids. (She also caters to kids with plenty of "gross" humor: booger-eating bugs, dragon dung, leaky sewer pipes, Land Wurm slime, cabbage sandwiches, etc.) And although she does introduce the potentially interesting Wolf Boy and Merrin Meredith, her characters, even Jenna and Septimus, feel under-developed, partly because she is so busy writing one exciting action scene after another--which actually begins causing a suspense-numbness. Indeed, despite a fair amount of Flyte going on in the novel, I rarely felt any magical wonder or transcendent exhilaration from the activity, partly because Sage usually shows Flyte during "suspenseful" action scenes.

If the story and characters were compelling enough, I wouldn't stop to ask questions, but as it is . . . Why would any pirate, no matter how notorious, keep a merchant prisoner in the hold of his ship for seven years instead of killing him or selling him for ransom? Why is Septimus so afraid of heights but dreams longingly of Flyte? Why does Jenna save someone's life at one point and then later angrily ask Septimus why he does the same thing? Why are so many of the ghosts--but not the Queen's ghost--visible to living people? Etc. And because Sage never really explains what Magyk is or how it works, despite Septimus having been Marcia's Apprentice for at least a year, for the sake of her plot she can do anything she wants any time. As a result, I often found myself asking questions like "Why do they use Magyk to make coffee?" or "Why don't they use Magyk to lift up this sunken boat?"

Gerard Doyle is a capable reader, but less enhancing than Allan Corunder was for the first book. Though Doyle is fine doing a "low, sepulchral voice" and natural enough doing women, his kids start sounding a bit whiny. The audiobook does not include Sage's "What Happened Before. . ." afterword, in which she writes amusing and neat mini-story backgrounds for nearly all the characters who appear in Flyte.

Flyte is not a bad book. It has many virtues. In addition to being good at telling page-turning stories with a heart, Sage imagines cool things like the Counterfeits board game whose counters have minds of their own. And the ShadowSafe and Doll's House are interesting and creepy. She's good at surprises. And I like her exploration of families: biological, adoptive, surrogate, coven, camp, and more. And I do like Septimus and Jenna and Marcia and Arthel and look forward to finding out how they develop in future books. But if the third book in the series is as disappointing as Flyte, I may regret having bought books 2-7 during an Audible sale. I hope that they will have less movie-ready action and more magical Magyk.

What was one of the most memorable moments of Flyte?

The scene where septimus flies the dragon. It was crystal clear, and amazingly interesting

Have you listened to any of Gerard Doyle’s other performances before? How does this one compare?

jerard Doyle is always brilliant. I also liked the inheritance cycle, which he preformed.

Of course. The whole series was that way.

It was very interesting. And there is a lot of irony.

Wish they hadn't changed the narrator

I love these stories. A fantastic, fun yet riveting with danger at times. But the narrator in this one is not as good as the one for Magyk, He was able to catch the mood and inject fun into the funny parts. This guy reads everything as though it were all the same dour stuff. Disappointed!

I really liked listening to the first book Magyk. The story was fun and the narrator so amazing.He really brought the story to life. He did great voices for the characters and his "singing"... Too funny! Unfortunately they changed the narrator and though I liked the story, the listening experience was not as enjoyable as with the first book.

I loved the second audiobook as much as the first and am excited to began the third book in the Septimus Heap series.