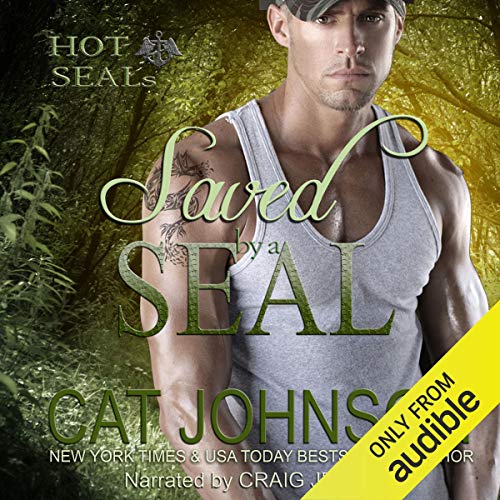 Saved by a SEAL

Zane Alexander was born with a silver spoon in his mouth, but the rebellious bad boy traded it in for a Navy SEAL trident.

Now, Zane's teammates are depending on him to get the startup capital they need to open their security company and he's gambling on his skills at covert operations. For a million dollars, he'll fake interest in Missy Greenwood, the Senator's daughter his father wants him to date in exchange for the investment.

But when Missy is kidnapped and Zane and his team are sent to Nigeria to rescue her and the schoolgirls being held, bullets as well as sparks of attraction start to fly. There's no more faking when both the danger and the emotions are all very real.

I love military stories and this one was good. As I listen to more and more books, I find narrators that I like and Craig Jessen is one of them. He brought the story to life. Very good.

Zane is compelled to date Missy by his father in order to get the investment required to start a security company. However, he finds himself caring for her where he usually deals in one night stands but she is leaving for Nigeria for a teaching assignment. That is when all hell breaks loose.
I enjoyed this story very much and look forward to more in the series.
The narrator is good with inflections creating emotion and drama that make it a good listen. Well worth it!!!

The Scene Transitions Did Not Seem Very Detailed

I listened to the audio book. It was supposed to be a 4+ hr listen, but it did not seem that long. The narration was ok. When the book began, it was hard for me to distinguish one character from another. This got easier as I moved forward in the book.

It was a quick read with some romance and action, but I did not expect it to move as quickly as it did. I thought there would be more details. Like when Zane's team went to Nigeria to rescue Missy, I thought there would be a lot more to that part of the story. The team got the word about the rescue. The team was told to sit tight, and the next scene, they were rescuing Missy, driving away from the camp, and then she was at home.

We could only infer that only 6 students survived because no one would answer Missy's questions. There was nothing said about what happened to Missy's friend after the rescue. That was just one part of the book that felt like it raced through the entire situation. At so many points I expected so much more.

There were steamy parts. The romantic parts occurred at the beginning of the book for me. Overall, the book didn't feel like it was enough. It was ok, but seemed to skim through the story. There was an HEA. I guess the ending was HEA'y enough.

Loved listening to this book. Craig Jesson does a wonderful job of narrating Cat’s book

Missy and Zane had known each other as children and teenagers. I loved how they reconnected and had a more grown up attraction. Missy was strong willed and wanted to be more independent from her family. Zane was very protective of her until he realized that it was more. They definitely were a fun couple when they were conversing. Craig Jessen made the characters come alive, and I enjoyed his changes in voice. I recommend this story.

I received a copy of this audiobook as a gift, and this is my unsolicited review.

There are more to these characters than meets the eye. While the hero is a little difficult to like at times, you have to respect his decisions. The heroine is a little too naïve for my tastes but she does show some spine when it counts.

A great blend of heat, swoon and suspense!

I listened to Saved by a SEAL on audiobook. I loved the narration. It was just what I needed to make a busy afternoon of housework speed by enjoyably!
-4 Stars-

I personally had a hard time getting past the narrator. I kept wanting to find the book and read it, I love Cat Johnsons stories. This is the first one I heard on audio and to be honest I almost stopped after the first chapter, Because I love Cat Johnson and knew the story would be good I hung on. I adjusted for the most part so I could listen. Many others enjoyed the narrator, so its personal preference. Come along as our sexy Alpha Playboy Zane finds out what love can do to him. Cheer him on as he deals with his A**hole father and lets his integrity lead the way. Cat also brings to light the devastation happening to the women and children in Nigeria and handles it in a gentle manner. Thank you for the opportunity to listen to your book! All thoughts and opinions are my own

This is a great book along with all of Cat’s other books. The chemistry with Missy and Zane is off the charts. The only downfall about the book is I wanted it to last longer.

Saved by a seal

I really enjoyed this book in audio.
The story starts out with seal buddies figuring out wit what to do retirement.
Jon came to his partner in GAPS (Guardian Angel Protection Services).
Zane Alexander is from a very wealthy family (Zane is at odds with his Dad).
He approaches his Dad about financing his company but his Dad puts restrictions on for loan or percentage
Of the company. The stipulation is go out with a childhood friend Missy, and make a commitment among
other things but Zane could notI go through with it to hurt the Missy , so his Dad takes offer of money back.

A wonderful, exciting adventure, the second book in this serious is a delight. As with the first one, the intimate scenes could be a lot more explicit and hot, but it doesn't make the story as such any less entertaining and a joy to read and listen to.