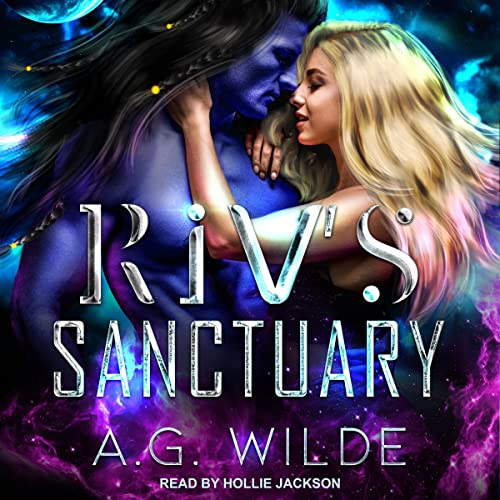 Abducted from Earth over a year ago, Lauren spent most of that time getting accustomed to her new life as one of the "animals" in an alien zoo.

When she's sold by the zookeeper, her life takes a turn she wasn't expecting. She has no idea where she'll end up 'til she's brought to a sanctuary owned by a tall blue hunk of an alien called Riv.

Riv's life is quiet and peaceful in a place as far away from civilization as he can manage. So when an annoying chatterbox of a human ends up on his doorstep, he's less than pleased. The human disrupts his life and his solitude and he can't wait to get rid of her.

Except...she's managed to wheedle her way in and suddenly those barriers around his heart don't seem so strong anymore.

He has two options: Let her go. Or let her in.

If you love grumpy heroes...

this book is for you.
This book at many of the things I love: a grumpy, reluctant hero with a soft heart. A strong female lead who doesn't do things that make her too stupid to live. And a chemistry that can't be denied between them. It's NOT an insta-love situation, although the attraction is there and they both tey to fight it.

I would recommend this to Ruby Dixon fans, although it doesn't have the insta-love so common in hers.

It took a while to get into this book, seemed a bit cartoonish at first and hard to take seriously. The book was not as I expected. Holly did a good job with characters.

This is a fun, pretty tame romance (2 sex scenes late in the book) but with a good build up. It is lighter than most alien abduction stories, but has a lot of similar notes (abducted, bought, sold, saved) so nothing really new which is perfectly ok with me. I like the universe that was built and I'm looking forward to the next 2 books - just hoping they have a bit more steam in them.

I legit had many moments of laughing out loud. Really hope we get to hear more antics about “fecking Giblet”

Besides that, I really thought the main couple was sweet and they’re easy to root for. I like how the author addresses trauma for both the main characters and how they acknowledge there own mistakes.

Looking forward to read about the brother’s and best friends book!

I love the readers the story can't wait for next two books. why 15

the story was really good, and I recommend it, but the performance was amazing by both narrators! they give a wide variety of accents flawlessly! give this a listen!

I enjoyed the storyline and it was very funny. This was one on the lighter side for sure. I would recommend it for a romance on the happier lighter side.

I loved listening to a book I’ve already read. Loren was like a little mite, by the time she worked her way under Riv’s skin it was a done deal!

If you enjoyed the world of Xul and his rebel brothers, this is an happy unexpected extension of that universe. It is so cool to see how the rest of the universe lives with the gator-guards and their toad-like overlords. And it answers the questions about what happened to some of the other abducted humans. Quirky, funny and just enough steamy, I greatly enjoyed this listen.

I adored this first book of this series. This is my first book by this author and I loved it. Excellent world building. I enjoyed the communication difficulties. I love Sci-Fi romance and this book fits nicely into my library.