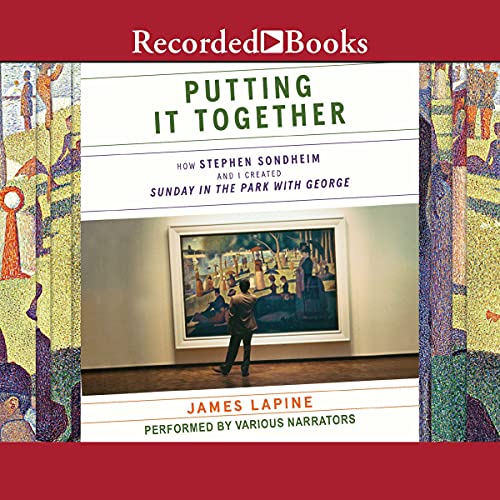 Putting It Together chronicles the two-year odyssey of creating the iconic Broadway musical Sunday in the Park with George. In 1982, James Lapine, at the beginning of his career as a playwright and director, met Stephen Sondheim, nineteen years his senior and already a legendary Broadway composer and lyricist. Shortly thereafter, the two decided to write a musical inspired by Georges Seurat’s nineteenth-century painting A Sunday Afternoon on the Island of La Grande Jatte.

Through conversations between Lapine and Sondheim, as well as most of the production team, and with a treasure trove of personal photographs, sketches, script notes, and sheet music, the two Broadway icons lift the curtain on their beloved musical. Putting It Together is a deeply personal remembrance of their collaboration and friendship and the highs and lows of that journey, one that resulted in the beloved Pulitzer Prize-winning classic.

Many years ago I sat in awe as SUNDAY IN THE PARK WITH GEORGE played out before me. I knew at the time it was an extraordinary piece of work, an intimate study of the creative process and the examination of the artist’s mind. I loved it. The music, sets, story and performances were the finest I’ve ever seen in my 50-odd years of theater going. This book brings the show back to
Life and is a must for anyone who loves the theater and the creation of true art. I cannot recommend it highly enough.A+A+A+

Not a musical theater “person” but a long time lover of the theater in general. This is by far the finest book on the creation of a work of art I’ve encountered. The story of the musical mirrors the relationship of the author and Stephen Sondheim. It’s a very enjoyable listen…Lupine can be self-indulgent but he also doesn’t shy away from relating conflict (which he sometimes is the cause of), portrayed as a normal part of artistic collaboration. This isn’t just great gossip (which it sometimes is) but a real exploration of creativity. Great book.

I could have listened forever.

Towards the ending of this musical, George describes the air as being "rich and full of light".

And I honestly cannot think of a better phrase to describe this book (and show itself, of course).

I've seen the filmed original production many times, as well as the most recent Broadway revival. It is a GIFT to finally have a history chronicling this magnificent show's creation/road to Broadway. This book is chock full of interviews between Lapine and Sondheim, the cast, crew and other industry members behind this work. Each was full of incredibly fascinating, deeply honest conversation. I listened in a state of awe.

My only complaint is that I wish it was longer! I would have loved to hear about replacement casts and the filming of the production for PBS.

The various narrators (especially Adam Grupper and Len Cariou) were excellent. The musical interludes elevated it even more. "Putting It Together" should absolutely be required reading for anyone interested in the theater. A masterpiece about the making of a masterpiece.

I put off reading the physical copy of this so I could listen to the audio book at work. It's a great listen, but a few of the back-and-forth dialogue segments are a little awkward. There are voice actors for just about everyone quoted, and the acting is great and consistent. My only gripe is that sometimes when two or more people are having a dialog the acting seems a little choppy, like the two aren't in the same room, which just sounds a little weird when it's supposed to be representing an actual dialogue/interview. Other than that this is everything I had hoped for. If you're a sondheim nerd, or even just a moderate broadway nerd, this is a must read/listen.

… and exhilarating. Fantastic to hear the amazing Len Cariou as Sondheim. Wish that the folks still with us said their own words, though. A bit jarring to hear others say the words of such recognizable voices as Bernadette Peters, Mandy Patinkin, Christine Baranski, etc. Still fabulous, though.

What an extraordinary book! The gossip, the lore, the incomparable craft lecture! The actual, mucky, grotty, painful step-by-step making of a great work of art! A brilliant ars poetica!

A must for any theater human

This book will enrich anyone interested in or working in theater, even those who know a lot about Sunday and the artists involved. It should be a must read for any aspiring musical theater professionals - and kudos to great performances by Adam Grupper and Len Cariou.

What a great backstory!

I enjoyed this book so much because I love Sunday in the Park with George. I wish we could have the backstory on all of Sondheim’s musicals. This book is a treat!

If you love musical theatre, you must hear this!

I love musical theatre. I love Stephen Sondheim. I love "Sunday in the Park with George". But even if you only like one of those things, you will enjoy this audio book. A treatise on how a musical, or probably any work of art, is created.

Read it. Don’t listen to it.

I enjoyed the content of the book. I liked learning how this musical (one of my very favorites) came to be. But oh my goodness the audiobook performance stunk! The attempt to simulate the various interviews of the people involved in the process was astoundingly off. Someone with experience in dialogue or just basic linguistic knowledge of human conversation patterns should have been hired to advise the reading of these interviews. I’ve listened to other audiobooks with interviews but by and large they met the challenge of reading conversations convincingly. This really missed the mark and was very distracting!