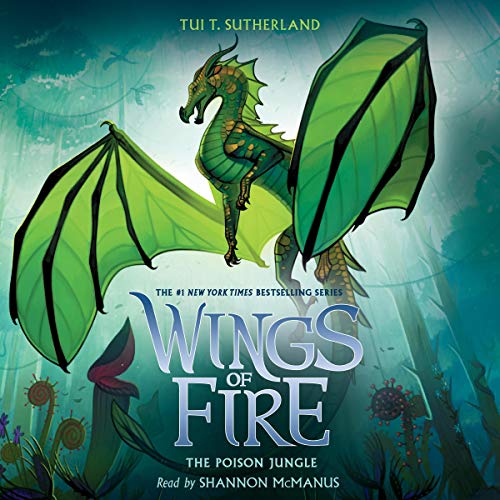 Some secrets are deadly. It's no secret that Sundew wants to destroy the HiveWings. It's her life's mission to exact revenge on the tribe that tried to wipe out the LeafWings and ripped every tree from the surface of Pantala.

Every tree, that is, except the wild and dangerous Poison Jungle, where the surviving LeafWings have been hiding since the war. Hiding, plotting, and waiting for a dragon like Sundew, who is uniquely qualified to bring down the Hives.

There are dark secrets in the jungle, though - some that Sundew is keeping, and some that she's only just beginning to discover. And now that a new war is upon them, Sundew and her friends must unearth the oldest secret in the jungle - even if what they find has the power to destroy them all.

I loved this book although, I think the book should have been longer. My favorite characters were Willow, Blue, and Hazel.

I fell in love with this series on book two and have read every book at least three times. But I was afraid that the audible reader wouldn’t be any good. I was proven completely wrong as she has been the best reader I have heard yet. She is funny and has a good narritive while providing new and interesting voices for the characters. Truly ten stars
👍🏻👍🏻👍🏻👍🏻👍🏻👍🏻👍🏻👍🏻👍🏻👍🏻😁

I stayed up till 4 in the morning listening to it and I loved it so much I felt like I was going to explode with awe I love willow and sundew and how bumblebee absolutely loves sundew and the way she talks is so cute and funny I mean like who doesn't like bumblebee? I can't wait until 14 but the icewing queen is going a little over the top with paranoia I don't think 2 tribes running away from an evil plant is going to attack and make MORE beings mad. anyways keep it up sutherland😁

I and my children have loved this series. We have listened to them together and read them together. All of a sudden we were all confused because Sundew is a female and Willow is a female and the relationship seemed to be turning into more than a friendship. Why do we need to throw something in that confuses children? There is no point. Now parents won’t even realize what their children are reading and I’m sure this will effect what they believe. I guess if that’s the goal...to normalize same-sex relationships, then Tui T. Sutherland has been successful, pushed her agenda and caused confusion in young children. Wow, sad for young minds that are so impressionable. What a disappointment when it was something that was so enjoyable as a family. I will quit recommending this series to young children now.

This book is amazing. my heart melted when I heard bumblebee say “snudo”. I think that Sundo being gay added to the story and to whoever is saying that it “not appropriate” there are a lot more gay dragons so why are you saying it now! Plus that’s that’s offensive to gay people.

Wings of Fire the poison jungle is a very good story I highly recommended:-) okay.

Great for anyone that isn't a bigot!

Conservative parents everywhere are crying because tui t Sutherland isn't a narrow minded bigot like them. Same sex relationships exist and they are not going anywhere. I applaud Tui T. Sutherland for including this in her books because all readers should be aloud to know, THERE IS NOTHING IMORAL ABOUT LOVEING SOMEONE THE SAME SEX AS YOU!!!

I loved this book! It was really great and the new characters were well developed.
Spoilers Ahead!
Fair warning: Sundew is in a lesbian relationship. If that bothers you, don’t buy this book.
A lot of the reviews on this book are conservative moms who are reviewing based on what their nine year old told them. They haven’t read any part of the book.
The relationship does not take a front seat in the plot. It is important, which is fair because the main character is Sundew and the relationship is important to her.
The plot wouldn’t have been changed if Willow had been a male dragon.
Sundew would have hid the relationship from her tribe no matter who Willow was.
All in all, a great book!

Enough with the love stories!

All I have to say is for children’s books, these have some pretty mature topics. The questions, especially around same sex relationships, that this story provokes in children, need to be introduced and discussed when parents see fit to address them. The children don’t need to be introduced to them in a book that after reading the first few 12, thought it would be safe. Yes there were multiple references to some of the same sex relationships between dragons in a couple of the other books, but this was straight in your face. No way to really avoid the questions here. Not going to purchase any more Tui T. Sutherland books again, that’s for sure. She can’t be trusted to simply keep it on an appropriate level for young minds.

this story is just so awesome

i couldnt stop listening to it until if was finished