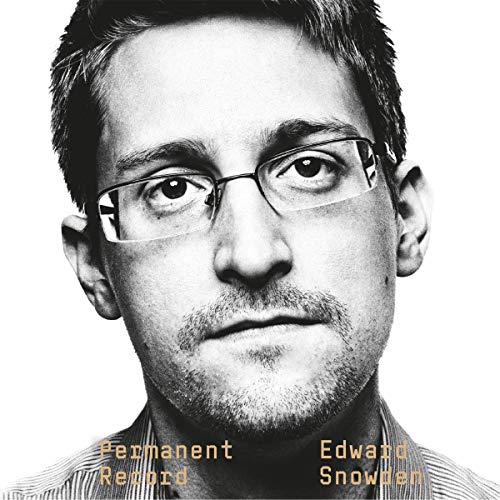 Edward Snowden, the man who risked everything to expose the US government’s system of mass surveillance, reveals for the first time the story of his life, including how he helped to build that system and what motivated him to try to bring it down.

In 2013, 29-year-old Edward Snowden shocked the world when he broke with the American intelligence establishment and revealed that the United States government was secretly pursuing the means to collect every single phone call, text message, and email. The result would be an unprecedented system of mass surveillance with the ability to pry into the private lives of every person on earth. Six years later, Snowden reveals for the very first time how he helped to build this system and why he was moved to expose it.

Spanning the bucolic Beltway suburbs of his childhood and the clandestine CIA and NSA postings of his adulthood, Permanent Record is the extraordinary account of a bright young man who grew up online – a man who became a spy, a whistleblower, and, in exile, the Internet’s conscience. Written with wit, grace, passion, and an unflinching candor, Permanent Record is a crucial memoir of our digital age and destined to be a classic.

I liked the book. but if you look some spicy secrets , you will be disappointed. I advise to read it , nevertheless.

Quite an interesting book, to learn about the life of Edward Snowden and how the events that lead to his fame unfolded.

I loved the whole thing. Learnt quite a bit about the violations performed by governments and private companies on our privacy, but also about the bravery of Edward himself and the sadness of his story.

This book has fully opened my half closed eyes and I now feel inspired to do something about the situation. Exactly what I am not sure. We'll see.

History will call him a Hero

When I first saw the breaking news about the leaked documents I called him a traitor, but over time and as more information came to light that view changed.

Listening to his story I feel ashamed I ever thought he was a traitor and I would like to think that if i was in his shoes that I would have the courage to do what he did.

Privacy is a fundamental right and he will be seen as a hero in the long run. Thank you for your service and what you did.

This book should be compulsory reading for high school students - and I would recommend this book for everyone.

An example of how to act aligned with your principles. An eye opening look into the surveillance state and the surveillance economy. A guide to encryption and personal security in a digital world. A thrilling story. A moving memoir. All in one book.

Well written, well read (audiobook). My respect for Mr Snowden grew deeper with this book and I enjoyed it immensely.

He dared to tell, dare to listen?

This is a very well written testimony, a thrilling story of the citizen Edward Snowden and his choice to tell us about an ongoing attack on our freedom by the systematic collection, storing and processing of our personal data, our personal life’s. Despite his personal cost, he chose to tell the story only he could tell. It is a breathtaking story, that most likely will change the way you feel about your devices and their cameras. It is a story we all should listen to - if you dare.

excellent book. 10 times better than Snowden movie. hes a real life hero. would of been better if he had of voiced it himself

I absolutely loved this book. If you’re someone with any technology in your life and you’re on social media or online, you need to read this book. Edward Snowden’s story is mind boggling and moving. He has sacrificed so much to do the right thing. 😃 I am also amazed at how much I could relate to his upbringing and his love of tech. His story reminded me of my own journey of discovery and the wonder of getting to know the World Wide Web. His insights on the state of technology and the Internet are thought provoking and I believe quite accurate. 5 stars for this book!

I was long waiting to understand the man and his ideologies behind Edward Snowden. The storyline and -structure is captivating from the beginning to the end. Every point he makes to justify his actions, is completely valid and demonstrates very well how corrupt and broken our system is. I can only press anyone to read or listen to this book

Its a good book ,the message and the story make for essential reading.The narrator was terrible his voice and accent really grinding on me,but the enormity of the story flattened any audio aesthetical concern.Good luck Ed and Lindsey

Excellent account. Great to learn more about who he was and why he risked everything! Brave to do what he did. Thank you Edward.

So serious and so romantic!
Its impossibly not to believe him. He does not
Leave out any
Details. This will be a book to read in school.

You are being watched

Since this rating is stored on the same server (AWS) as the CIA-cloud (has been while Snowden worked there) this one should be easy for you to find. I'd gladly be added to that NSA-list for listening to the whole thing in 2 days.
f*** you intelligence agencies world-wide.
You are THE cancerous element in society.
No terrorism, communism or star-warsism.
Just you with your self-induced importance and secrecy.
I'd party until I've deciphered a 256-bit-encryption if I'll ever be able to see your demise happening during my lifetime.
'let the bodies hit the floor'

Very human story about the life that led to the leak that caused one of the most controversial USA scandals. Beside being very human, this book is quite educational in matters of IT concepts. Very interesting glimpse of the wheels that turn being USA National Security agencies.

Although the news on the incredible data collection hunger of the NSA was well known to me (and everyone) through the acts of Edward Snowden, reading (or listening) to this book was extremely worthwhile, besides being rather entertaining! I now better understand the overall context of how the situation has developed that allowed Ed to even get the understanding himself for the unconstitutional act of mass surveillance, and his urge to share this information publicly through selected journalists. This certainly woke me up (again), after the outrage from the news in 2013 has died down a bit. Definitely a great book!

I always wondered Why?

Now I know better and many people and institutions will struggle to discredit or vilify Snowdon after such a personal book.

one of the most defining stories of the informatio

an autobiography of one of the most important "heroes" of our timey, with accent if the compelling arguments behind the disclosure of one of most widespread scandals of history.