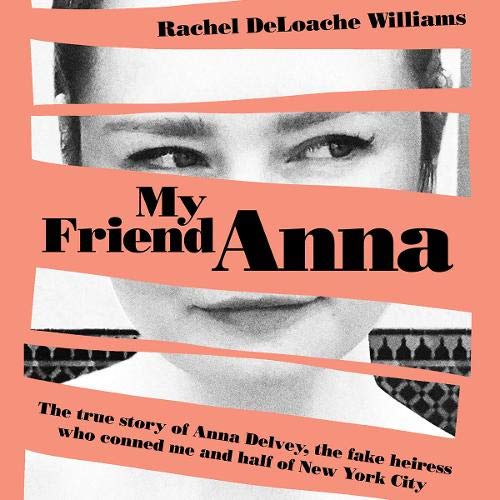 How does it feel to be betrayed by your closest friend?

A close friend who turns out to be the most prolific grifter in New York City....

This is the true story of Anna Delvey, the fake heiress whose dizzying deceit and elaborate con-artistry deceived the Soho hipster scene before her ruse was finally and dramatically exposed.

But after Anna's debit card was declined in a Moroccan medina whilst on holiday in a five-star luxury resort, Rachel began to suspect that her increasingly mysterious friend was not all she seemed.

This is the incredible story of how Anna Sorokin conned the high-rollers of the NYC social scene and convinced her close friend of an entirely concocted fantasy, the product of falsified bank documents, bad cheques and carefully edited online photos.

Written by Rachel DeLoache Williams, the Vanity Fair photography editor who believed Anna's lies before helping the police to track her down (fittingly, deciphering Anna's location using Instagram), this is Catch Me If You Can with Instagram filters.

Between Anna, Fyre Festival's Billy McFarland (Anna even tried to scam Billy) and Elizabeth Holmes, whose start-up app duped the high and mighty of Silicon Valley, this is the year of the scammer.

*Anna stood a high-profile trial in New York that has been followed voraciously by the media. She was found guilty of theft of services and grand larceny, facing up to 15 years in prison. The trial ended on 25th April.*

"'A Catch Me If You Can for the internet age... What Anna did was make Instagram flesh." (Guardian)

"At a time when we are obsessed with true-crime...Anna Sorokin is the real deal. That doesn't make it right. But oh, it tastes good." (Pandora Sykes, Elle)

"Anna looked at the soul of New York and recognized that if you distract people with shiny objects, they will be virtually unable to see anything else. And the thing was: it was so easy." (New York Magazine)

It was a mildly entertaining story. A very light and easy listen. I don't really feel like I wasted a credit, but I wouldn't recommend it. I wasn't aware of the story before coming across this book, but I imagine if you've read an article in the NY Times or wherever you don't need to bother with this. It doesn't need to be a book -- in fact it's quite a feat that the author managed to pad out a pretty basic story (at least the author's own experience of it; it's not clear how much more there is to Anna's side) into a 9hr audiobook. At times the author comes across as unbelievably naive and whiny but you can see it coming. I mean, the book is in a way 9 hours of "poor me" repeated over and over. Ultimately, the book is saved by the fact that the story is fairly interesting - but Rachel is a pretty boring character in it and that's all you really get here.

This is by far one of the best works of non-fiction I have come across. Rachel is a master of words, and her chilling rendition of her experiences with Anna Delvey is gripping. It is masterfully composed and one feels gripped by her experiences, and one cannot help by feeling compassion for her.

I drive a lot for work and this helped me get through the long hours, making me actually want to drive more and not stop the narrative.

Well done Rachel, this was an absolute Tour De Force.