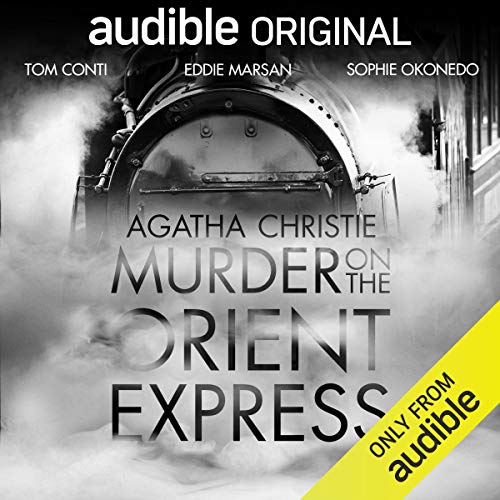 Murder on the Orient Express

A train stuck in the snow carries a cultural mixture of passengers...and all of them suspects in a brutal murder. All, apart from the great detective Hercule Poirot, mais naturellement, who is tasked with finding the culprit in a case where all is, of course, not what it seems. This multicast drama version of one of Agatha Christie's best known mystery novels features Tom Conti, Sophie Okonedo, Jane Asher, Rula Lenska, Art Malik, and many more great actors from around the world. With a full SFX soundtrak and exclusive score, the drama follows our wryly funny, sharply intelligent, and often grumpy hero as he untangles the most tangled of icy webs to uncover the truth. One of my favourite books since early teenage years, MOTOE showcases Christie in expert form, transposed into an excitingly immersive and lively production from Audible Originals. —Rebecca, Audible UK

Winner of the 2018 CAMEO Book to Audio Award

What begins as a routine journey on the luxurious Orient Express soon unfurls into Agatha Christie's most famous murder mystery. On board is the famous detective Hercule Poirot, and one man who, come morning, will be found dead, his compartment locked from the inside.

This Audible Original dramatisation follows the train as it's stopped dead in its tracks at midnight. The train's stranded passengers soon become suspects as the race to uncover the murderer begins before he or she strikes again.

"With a perfect accent and professional ease, Tom Conti becomes one of the most-beloved detectives in fiction, Hercule Poirot.... The entire cast has a wonderful time playing off Conti as the detective interviews the suspects one by one.... Even those who know this classic's clever ending will enjoy the production." (AudioFile)

A Classic Mystery, dramatized by Audible

Important note - This is a dramatized audio book, not a direct reading of the novel. Which means, this is a novel acted out by a full cast of actors, and is slightly shorter than the full reading would be. Personally, I LOVE dramatized audio, but some may not. Listen to the sample to see what it's like.

Ok, my review: I love Agatha Christie, and have listened to most of the Miss Marple and Hercule Poirot classics, either the full version or the dramatized version. I have also read and listened to (and watched!) Murder on the Orient Express, so, while this is an amazing classic mystery, I actually knew the story. And I still loved it! The characters are so rich, the acting is superb, and Poirot is such a delightful treat at any time.

This book throws no surprises, and sticks exactly to the plot of the novel.

This is an Audible Original dramatized book; there is an earlier dramatized version available, by the BBC and featuring John Moffat as Poirot here:

You may also opt for the full novel instead. There is one read by Kenneth Branagh here on Audible.com here

Very Entertaining But Not an Unabridged Book.

I found the performance quite enjoyable but I prefer unabridged audiobooks so I own both versions. I look forward to listening to the full story soon so I can better judge this abridged audiobook. The Poirot performance was uniquely done. His reactions of amused chuckles were unexpected but interesting.

Fun Listen - Not the Actual Book

This is a fun listen - Tom Courtenay as Poirot is reason enough - but it is actually more of a radio play than an audible experience of Christie's book. If you want something quick and light, this will work, but if you want the real book, there are other versions you can listen to.

It reminded me of listening to radio theater before TV became popular.
Lots of fun! !!l

Classic revisited with an ensemble


As far as the story itself: I had to remind myself that this was first published in 1934, and since then how many authors have borrowed Ms. Christie's cleverness. It is dated, but stands up when read in the spirit of its time. The setting of the Orient Express blocked in a snow storm felt perfectly claustrophobic and sinister; a great setting for the murderous deeds to come. The characters are like looking at a bag of glistening gems, each one beautifully colored, rich and faceted! It's hard not to see this story play out in your mind with every word Christie wrote

As far as the performance: I am a fan of the ensemble performances in most cases. I find them very entertaining, but sometimes the shift of character can seem jarring. This version was good, but not without a few notable faults that seem mostly technical. The sound effects team seemed like they just didn't fully commit to letting us have the full audio experience...were those sound effects I heard or just bad editing...was that a door shutting or something falling in the recording studio? I didn't detract any points for the effort, just am mentioning this so buyers know what to expect. It still added a little excitement to hear a train whistle or approaching steps. Overall a fun and entertaining experience.

Accents: Good news/bad news. Tom Conti as Hercule Poirot -- good acting but his accent was at times difficult to understand (perhaps because he is a Scottish actor doing a Belgian detective; perhaps because we are used to British actor David Suchet's portrayal for 25 yrs.) He almost seemed to be strangling on his accent in the beginning. His personal dialogues are half whispered with an echo-y effect added making them particularly difficult to understand. It gets smoother, stay with it.

For fans and those familiar with the story a good purchase, otherwise I would say read the text first and then if you enjoy that, try this production.

Amazing - I couldn't stop listening to it

Very few audio books hold my attention to where I don't want to stop and this is one of them. The story is excellent - A classic Agatha Christie - I will not give anything away except - expect the unexpected if you are not familiar with Agatha Christie and/or this classic novel.

The performance is amazing, keeping the listener engaged and anticipating the next part of the puzzle.

I hope Audible creates more Audible Original Dramas and wish there were more like it.

This version has 2 volumes within the story line. The change in volume makes it too difficult to understand part of the story. I will be listening to a different version of this book

Audible invites you to Board Christie's Train

Now THIS is a trip worth taking. Even if you are familiar with Agatha Christie's classic novel Murder On The Orient Express, Audible's full cast production is a pleasant revelation. Tom Conti makes a wonderful Hercule Poirot and heads up a terrific ensemble cast. The acting really is first rate and the sound effects enliven the listening experience. Now go, get your ticket (audible credit) before the train leaves the station, but be warned, it is already a pretty full ride! &quot;Audible 20 Review Sweepstakes Entry&quot;

This audiobook WAS PHENOMENAL!!! I couldn't stop listening. The sound effects, character voices, and background sounds just tied it all in. I haven't listened to an audiobook since Harry Potter book 5 came out on CD. This brought me back on how much I love them. I can not thank the creators enough for this most exceptional piece of work.

Will there be more of this type?

My English Review: Great speakers, nice atmosphere. Agatha Christie's classic is beautifully brought to life here. The voice actors do an excellent job (although the accents could have been a little more subtle), the soundscape is calm but present and the story was adapted without any compromises. A clear alternative to the normal audio book versions!