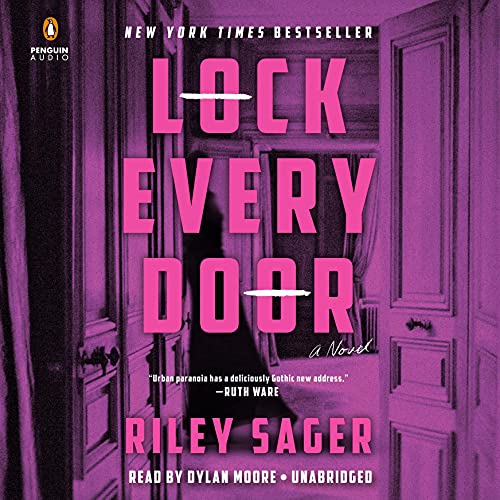 “Looking for a suspense novel that will keep you up until way past midnight? Look no further than Lock Every Door, by Riley Sager.” (Stephen King)

The next heart-pounding thriller from New York Times best-selling author Riley Sager follows a young woman whose new job apartment sitting in one of New York’s oldest and most glamorous buildings may cost more than it pays.

No visitors. No nights spent away from the apartment. No disturbing the other residents, all of whom are rich or famous or both. These are the only rules for Jules Larsen’s new job as an apartment sitter at the Bartholomew, one of Manhattan's most high-profile and mysterious buildings. Recently heartbroken and just plain broke, Jules is taken in by the splendor of her surroundings and accepts the terms, ready to leave her past life behind.

As she gets to know the residents and staff of the Bartholomew, Jules finds herself drawn to fellow apartment sitter Ingrid, who comfortingly reminds her of the sister she lost eight years ago. When Ingrid confides that the Bartholomew is not what it seems and the dark history hidden beneath its gleaming facade is starting to frighten her, Jules brushes it off as a harmless ghost story...until the next day, when Ingrid disappears.

Searching for the truth about Ingrid’s disappearance, Jules digs deeper into the Bartholomew's sordid past and into the secrets kept within its walls. What she discovers pits Jules against the clock as she races to unmask a killer, expose the building’s hidden past, and escape the Bartholomew before her temporary status becomes permanent.

“The Bartholomew is an apartment building of terrifying secrets. You'll find startling twists and alarming surprises down every dark hallway. It's too late to lock the doors - the horror is already inside. My favorite thriller of the year!” (R. L. Stine, author of Goosebumps)

“The author, writing under a pen name, relates ominous events and spooky developments with skill, adding an element of social commentary and a surprise twist ending - elevating this exercise in terror above the ordinary shocker.” (Wall Street Journal)

The Have and the Have Nots

I won't rewrite the book jacket bio here. I'm just going to get into my general assessment of the book.

This book addresses the disparity between those who have money, power, and privilege and how they see those of us who have very little (struggling to find gainful employment, between living situations, little to no money, etc.) in comparison.

If you start to question why the apartment sitters of the Bartholomew building really can't have visitors, spend nights away, or bother the elite residents, and why there is so much odd turnover of temporary residents, you'll get what the story is actually about. You just have to dig a little deeper into "if it is too good to be true...."

It is certainly more sinister and upsetting than you imagine. There are a few misleading twists and turns, but, ultimately, the book is a solid, suspenseful, at times predictable read. You will likely be able to figure things out about 65% of the way through, or sooner if you paid attention to the little details about what has been said or shared about the building and the people living in it, and more importantly what hasn't (been shared).

The performance is well-done; the writing itself isn't too over the top, though much of the plot is; the characters, minus our protagonist, are not well-developed and rounded out. We get one-dimensional rich people and know even less about their assistants (medical staff, doormen, etc.). We're not going to know too much about most of them until the near-end of the book.

"A gothic novel for adolescent minds"

I certainly didn't enjoy this story...It was very ridiculous and I found my mind wandering to other things...I really struggled to finish it!
I feel the author had to fill the pages with four-letter words and crude fluff in order to snag a younger audience..
This is not a good read and I would not recommend it to any well-read adult....

This is my first time reading a book by this author! It was part of my book of the month club. I absolutely loved it! I could not predict the ending would be so gruesome! No spoilers here but I will definitely be looking for more books by this author!!

A lackluster mash-up of several better books, most notably Rosemary’s Baby. There isn’t a character, plot point, or scene you haven’t read or watched in a movie before. The narrator does a decent job tho her attempts at a Brooklyn accent are pretty funny.

I didn't have an issue when I thought the bad guys were Devil worshippers, nor did I have an issue when the truth was revealed. My problem with this novel is this: the main character simply wasn't very bright. The fact that she was sending texts to her missing downstairs neighbor made me roll my eyes - hard. Not to mention her sleeping with Dr. McWeirdo... Just yuck!! Then, suddenly it was as if she'd had a brain transplant because she was setting fires and spitting out her meds. This was the weakest of Sager's novels by far. I've seen it suggested that it's best classified as YA, and I agree with that. The narrator annoyed me, as well. It's a shame, because the backdrop was atmospheric and creepy. The flimsy plot and stupid characters just didn't do it for me.

An intriguing listen and ending!

I could not wait to get in the car to see what happened next! My first audible book well exceeded expectations!

A lot of the reviews I read suggested the book was a bit convoluted. Its a great read understanding that the author dabbles in the noir, supernatural, and classic horror elements. I also love that the narrator sounds a lot like Maggie Gyllenhaal.

It's a little at 1st but picks up towards the end and was very interesting.

One of my faves!

I truly enjoyed this story line, and all that went with it. I thought it might end predictably, but it didn't. A great listen, in my opinion!!!

The narrator is overly dramatic and the story tedious. I have no idea why so many people like this book. It’s just one eye-rollingly, predictable set up after another. Not even the lure of solving the mystery could keep me reading. At this point, it can stay a mystery for all I care!