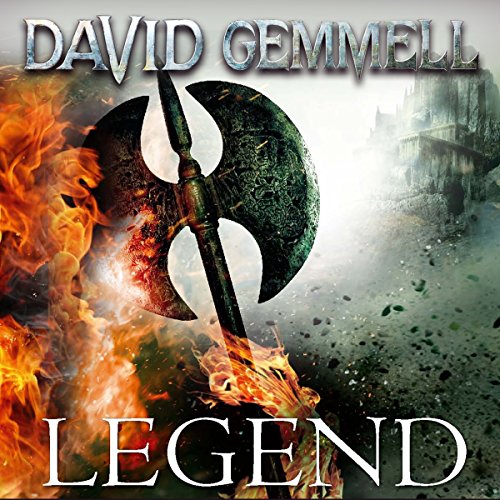 Druss, Captain of the Axe: the stories of his life were told everywhere. Instead of the wealth and fame he could have claimed, he had chosen a mountain lair, high in the lonely country bordering on the clouds. There the grizzled old warrior kept company with snow leopards and awaited his old enemy, death.

Mighty Dros Delnoch, protected by six outer walls, the only route by which an army could pass through the mountains. It was the stronghold of the Drenai Empire. And now it was the last battleground, for all else had fallen before the Nadir hordes.

And hope rested on the skills of that one old man....

In the early 90’s, back when there were still bookstores to browse in, I picked up a copy of David Gemmell’s “Lion of Macedon” because I thought it was about one of my favorite historical figures, Alexander the Great. Well, it was and it wasn’t, but it was a great book and I went on to read “Legend," Gemmell’s first published book, and then pretty much everything else he wrote (which was a lot) before his premature death in 2006.

These books introduced me to heroic fantasy and led me into Guy Gavriel Kay and later G.R.R. Martin, Michael J. Sullivan, and Brandon Sanderson. The shifting POV that is prevalent in all these authors' works, the mixture of magic grounded in a world that is often recognizable (“history shifted 25% to the fantastical,” as I believe Kay has said), the many shades of gray between black and white—all these are present in Gemmell’s books, which now, finally, are coming to Audible. Hooray!

In “Legend,” the fort of Dros Delnoch stands between the Drenai civilization and devastation. It is undermanned and soon to be under siege by the “barbarian” Nadir under their leader Ulrich. The earl in command of Dros Delnoch has sent out two desperate pleas, one to “The 30,” an order of (surprise) 30 warrior monks with both physical and supernatural gifts; and a second plea to the legendary hero “Druss of the Axe.” The tales say Druss and his axe Skaga together once turned back an invading army of thousands. The earl, who was at that battle, knows it’s somewhat but not really true, but he needs someone to restore morale and stop the desertions. Now 60 years old, Druss is called upon for one more epic stand.

Once you know Gemmell admitted to a fascination with the Battle of the Alamo, the general outline of the story of the book won’t be a surprise, although its outcome might be.

Gemmell’s books are less poetic that Guy Gavriel Kay’s and (thankfully) less dismally violent than George R.R. Martin’s. In all Gemmell’s books, the underlying metaphysical battle concerns the balance between Creation (“the Source”) and Chaos, between life and destruction. There is also the Void, a gray and dismal state of stasis (purgatory?). There is a hopeful note in most of these books that I find is lacking in today's postapocalyptic fantasy.

As a first novel, “Legend” definitely has flaws, but it sets the stage for the “Drenai tales,” one of several series and a number of stand-alones the prolific Gemmell wrote. The Drenai books (I’ve listed them below) don’t have to be read in order, and the last few are, in my opinion, not all that good--along with some great stuff, Gemmell penned several 2-star stinkers. The different books take place backward and forward in Drenai history. “Legend” is the starting point, and I think it forms a rather amazing trilogy with two of the other books, which I’ve noted (it’s just my opinion, but together the three close a circle).

As for the narration of “Legend,” Sean Barrett is a fine British voice actor who keeps the energy up and the melodrama down. I’m definitely looking forward to more Gemmell, which Audible already listed on preorder.

A part of fantasy that has always appealed to me is how travelers would wander around sharing stories at campfires and taverns. History and legends would travel around just by word of mouth. This story made me feel like I was their sitting at the campfire eager to here the rest of a legend. Sean Barrett is an amazing narrator for this since he just sounds like some old warrior. This book has plenty of action and great supporting characters. I really do not know who to compare it to since I thought it was rather unique. This is also one of the few fantasy books where I actually rooted for two people that were in love. The feeling of many of the people just felt really genuine.

Don't let the plot fool you. Although it does seem like the same old tale, unbreachable fortress against unstoppable army. You should take note of the fact that this book was written in the 80's, this tale can stand the test of time. Very well written, strong character development and superb narrator/actor. I will be searching for more of Gemmell's work, as this is my first book by him.

this book surprised me in so many ways! the action was almost nonstop, kept me, literally on the edge of my seat, hands over my mouth as I awaited an outcome.

the characters were well fleshed out had the depth, conflictions, individualities of real people. I came to love them and sobbed like a little child as they died.

The story is war, seige, 500 to 1 odds and the defenders of the fortress are grossly outnumbered and unprepared. Some soldiers, some outlaws, raw recruits consisting of farmers and bakers, but Druss the Legend pulls them together and trains them hard!

the old earl is dying and his warrior daughter finds love with a man she would never have expected to love, they marry and he becomes Earl of the fortress, fighting side by side with his wife, with Druss the Legend and with a 30 member group of warrior priests who can speak mind to mind with each other, can read the minds of anyone and see into the future.

the combination of all these components bring constant surprises! the end will blow your mind!

I think Sean Barrett's performance was magnificent!! his timing, his phrasing, his VOICE brings this book to life! If you buy no other book this month....buy this one! You will not be able to stop listening!

I rarely write reviews, but David Gemmell created something rare and wonderful in this first book of the Drenai series! Go spend your credits and read the whole series! Sean Barrett narrates the whole of it and he is perfection! So! stop reading this review and go buy this book! you'll be hooked!

More than I imagined!

I read the paperback when I was a teen (over 20 years ago) and I was delighted to re-experience this perfect story from a while new dimension. David Gemmel is easily my favorite author of all time...his perception of human nature along with his uncanny talent to keep the story's pace on edge is so freaking awesome!!! You are missed David Gemmel...so missed...
Now for the rest of his audio books!!!

This is a good read if you love epic fantasy genre books. It is more sophisticated with character development than most books of this genre.
Legend is the first book published by the author in 1984. I will be reading more of his books.

If you like this book or this genre and are looking for other books I recommend the following books:

Note: the order of the books 1,2,3 is not an order for what I think is &quot;best&quot; although &quot;The Eye of the World&quot; and &quot;The Name of the Wind&quot; are my favorites.

An epic that stands the test of time

Legend isn't the best book, it's not perfect and its not life changing at all. But it is keystone in fantasy and has all the ingredients you need to cook up a great fantasy story. Gemmell is a legend and this book is testament to his work and love for the craft. Any fantasy fan who doesn't shy away from the darker side should endeavour to tick this tale off the list. Narration is very well suited to the tone of the story and range is ample for the characters.

I felt like someone must be trying to keep this a secret for as good as it is and as little as I've heard of it.

One of my favorite listens!

I can't say enough nice things about this book. The story and the characters are developed at just the right pace, and I found myself genuinely cheering for them or sympathizing with them. Narration was equally excellent. Love finding gems like this.

I have love this book for years.

As much as I thoroughly enjoy his later more textured, complicated characters and works, and I do, this book never fails to satisfy. I have loved it since the first time I read it 25 years ago, and am happy to return time and time again.

A wonderful tale of life, love and heroism, with just a little dash of magic