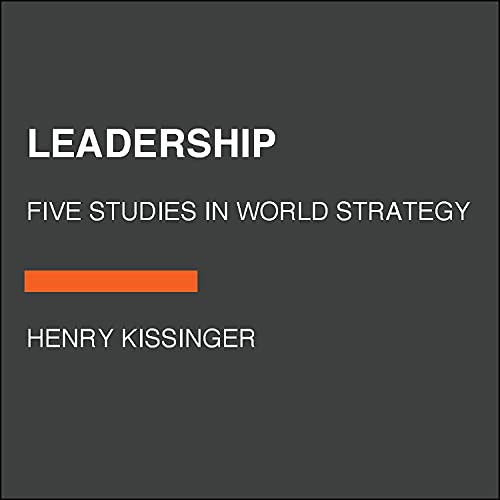 Henry Kissinger, consummate diplomat and statesman, examines the strategies of six great 20th-century figures and brings to life a unifying theory of leadership and diplomacy

In Leadership, Henry Kissinger presents a far-reaching study of six impactful leaders in modern history: Charles de Gaulle, Konrad Adenauer, Margaret Thatcher, Richard Nixon, Lee Kuan Yew, and Anwar Sadat. Emerging in a period of institutional and imperial collapse across the globe, these leaders created a new international order from the vestiges of the old. Drawing not only on his deep study of history, but also his distinguished career in government, Kissinger pulls back the curtain to expose the masterful strategies of these great geopolitical minds. What results is a subtle and discerning portrait of modern statecraft, revealing timeless lessons on strategy, diplomacy, and leadership.

Looking far beyond their well-known victories and defeats, Kissinger contextualizes their highly individual strategies of statecraft over the scope of their lives - from their rise to power, to controversies and reversals, to epoch-making decisions and achievements. From Kissinger’s unique vantage point and through his personal relationships with his subjects, we see not only the impact of these far-sighted statesmen during their period in power, but also their legacies.

Throughout, Kissinger sheds light on leadership in times of war and peace and negotiation across gaping divides. Essential listening for all hoping to master the arts of command, persuasion, and inspiration, Leadership is at once sweeping in its scope and intimate in its perspective.