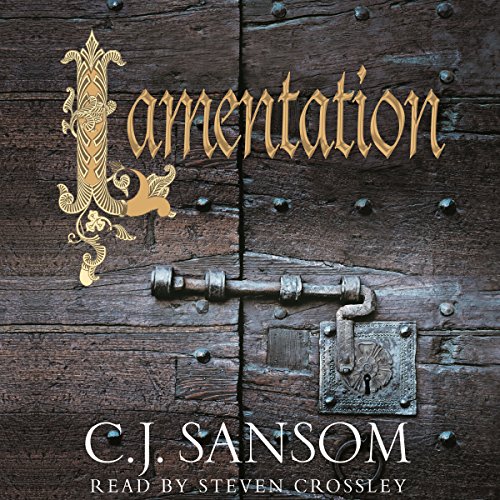 Summer, 1546. King Henry VIII is slowly, painfully dying. His Protestant and Catholic councillors are engaged in a final and decisive power struggle; whoever wins will control the government of Henry's successor, eight-year-old Prince Edward.

As heretics are hunted across London, and the radical Protestant Anne Askew is burned at the stake, the Catholic party focus their attack on Henry's sixth wife, Matthew Shardlake's old mentor, Queen Catherine Parr.

Shardlake, still haunted by events aboard the warship Mary Rose the year before, is working on the Cotterstoke Will case, a savage dispute between rival siblings. Then, unexpectedly, he is summoned to Whitehall Palace and asked for help by his old patron, the now beleaguered and desperate Queen. For Catherine Parr has a secret. She has written a confessional book, Lamentation of a Sinner, so radically Protestant that if it came to the King's attention it could bring both her and her sympathizers crashing down.

But, although the book was kept secret and hidden inside a locked chest in the Queen's private chamber, it has - inexplicably - vanished. Only one page has been found, clutched in the hand of a murdered London printer.

Shardlake's investigations take him on a trail that begins among the backstreet print shops of London but leads him and Jack Barak into the dark and labyrinthine world of the politics of the royal court. Loyalty to the Queen will drive him into a swirl of intrigue inside Whitehall Palace, where Catholic enemies and Protestant friends can be equally dangerous, and the political opportunists, who will follow the wind wherever it blows, more dangerous than either.

The theft of Queen Catherine's book proves to be connected to the terrible death of Anne Askew, while his involvement with the Cotterstoke litigants threatens to bring Shardlake himself to the stake.

"CJ Sansom is highly skilled at weaving together the threads of his plot with the real and riveting history… The atmosphere of fear and suspicion is brilliantly rendered…as the plot draws to a clever and satisfying conclusion, Sansom gives us a clue about where the king’s death will take Shardlake and it is a spine-tingling prospect." (Antonia Senior, The Times)
"This gripping new novel by the inventive CJ Sansom shows that, when it comes to intriguing Tudor-based narratives, Hilary Mantel has a serious rival… From the fact that the historical Catherine Parr did write the Lamentation of a Sinner, Sansom elaborates a multistranded fiction. Partly a detective story as Shardlake solves the how and why of the theft, partly a thriller with casualties mounting in the search for the book’s whereabouts, partly a panoramic re-creation of the turbulent London of 1546, from the court’s gilded warren of intrigue to publishers makeshift huts in the shadow of St Paul’s. Lamentation is sure to give Sansom’s many fans further cause for jubilation." (Peter Kemp, Sunday Times Culture)

"As always, Sansom conjures the atmosphere, costumes and smells of Tudor London with vigour, from the gilded halls of Whitehall Palace to the dungeons of the Tower." (Stephanie Merritt, The Observer)
"… Shardlake shines in this expertly executed sleuth tale…It ends on a hopeful note for the many followers of this splendid series, which combines the imaginative insights of fiction with scholarly research."(Jane Jakeman, The Independent)
"It is a mark of authorial self-discipline that Sansom wears his considerable historical research lightly, subordinating it to character and action…The orchestration of plot over 600 pages, and the final twist, is literary craft of a high order…With the Shardlake series, and with this volume in particular, Sansom has surely established himself as one of the best novelists around." (Alan Judd, The Spectator)
"…his interpretation of history is always strongly substantiated and frequently provocative." (Alfred Hickling, The Guardian)
"This, the sixth of CJ Sansom’s Shardlake novels, unsurprisingly went straight to the top of the bestseller list as soon as it was published. Such is their reputation. Every book is a delight, and each one that little bit better than the last… Sansom’s skill as a writer , coupled with his exhaustive research, makes readers feel as if they are living in the period he is writing about. Hilary Mantel may gobble up the big literary prizes for her explorations of the complex mind of Shardlake’s old boss, Thomas Cromwell, but when it comes to recreating the authentic atmosphere of 500 years ago Sansom wins hands down." (Nigel Nelson, Tribune)