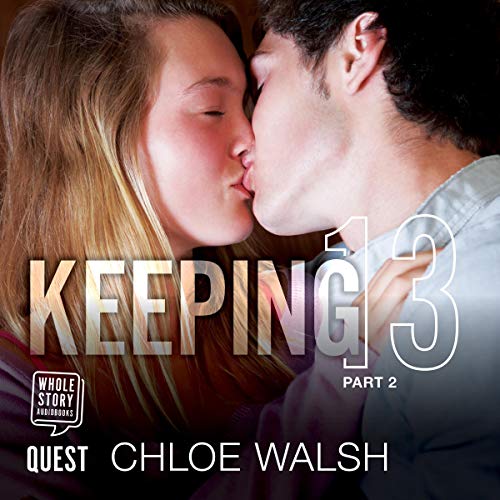 Friendship, first love, rising fame, horrifying secrets and pain all fuel together as two teenagers from the opposite side of the tracks collide in Keeping 13: Part Two, the concluding story for Johnny and Shannon.

Following a devastating injury that has left him side-lined and stripped of his beloved number 13 jersey, Johnny is struggling to hold on to his dreams. Lost, insecure and desperately seeking comfort, he sets his sights on unravelling the mystery of the girl with the midnight-blue eyes. With his best friend, Gibsie, by his side, Johnny embarks on his quest of exposing the secrets surrounding the girl who haunts his every waking hour. Secrets are exposed and lives are changed forever in Keeping 13: Part Two, the second part of the explosive sequel to the best-selling audiobook Binding 13.

One of the best narrated series EVER! I mean this duel narration was perfection for this series!
I absolutely LOVED all four books, and this series is one I will listen to again and again!
I really hope we get a story for Gibsy, Joey, and Ty (I just know his would be deliciously devilish 😉) and I would love to hear the future of Johnny and Shannon and of course Ollie and Sean❤️
I think a future story of Shannon and Johnny when he’s pro would be a good drama addition (with all the girlies throwing themselves at the pros) and perhaps a little taste of what that feels like for Johnny now Shannon comes into her own?? Maybe a few aggressive suitors trying to sway Shannon from him? Whatever happens as long as they get HEA I’m good lol! It would be nice though if for once the GUY is more worried about the men “fanboying” over his girl than the other way around lmao
❌⭕️❤️❌⭕️❤️❌⭕️❤️