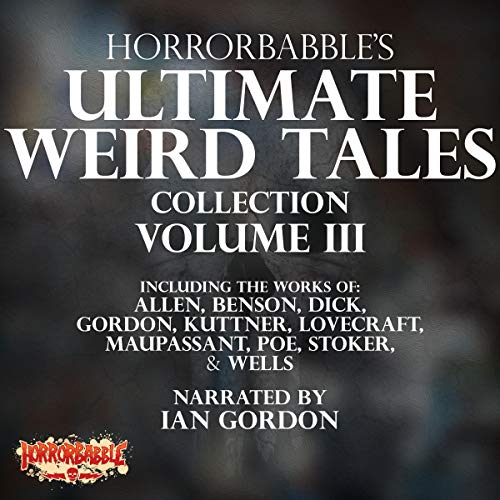 This collection comprises stories by and inspired by the originators of weird fiction. From Allen's "The Arctic Death", through to Poe's "The Tell-Tale Heart", Stoker's "Dracula's Guest", and beyond. Time immemorial; worlds unimaginable.

Ian has produced another mammoth collection of tales written to inspire dread and wonder. Deftly read by Ian, the net is once again cast far to capture all sorts of delightful tales. Classics from 19th century writers like Hawthorne, Maupassant and Poe are included. Plenty of 20th century pulpy goodness from Lovecraft, Howard and others as well. Expanded Cthulhu mythos tales include Kuttner's "The Salem Horror" and Wandrei's "The Tree-Men of M'Bwa".

Classics like Stoker's "Dracula's Guest", Blackwood's "The Willows" and Harvey's unsettling "August Heat" are here as well as a wonderful selection of works by lesser known practitioners of the weird. Ian includes some fine contributions of his own to this foray into the strange. H.G. Wells, Frank Belknap Long and PKD are not forgotten either.

Another brilliant compilation by HorrorBabble following their previous two stellar volumes. Something for everyone here. The stories and reading are first rate. What will volume IV bring next? I will be listening in anticipation!

Huge Horrorbabble fan and came here from YouTube to help support the channel and Ian.

I'm about half way through this collection and it's fantastic! Ian Gordon does a really good job narrating them - he's very clear with his pronunciations.

The collection contains 40 "Weird Tales" from yesteryear. One thing I like about this collection vs. previous collections is that the stories are titled in Audible. But I found out this isn't the publisher's fault - it was not until recent that Audible allowed publishers to title the chapters, and as of yet older titles have not been updated (waiting on Audible for that, not the publisher).

One of my favorite ways to enjoy these stories is with a paper copy of the story and I follow along as I sit and relax - and I can choose to just listen or read along.

As in all large collections there is bound to be something for everyone, but the chosen stories will run the gamut from 1 to 5 stars. There is enough good, and some very good in this compilation to make it worth checking out. While Ian Gordon's narration is good I can't say I'm a fan of his writing.
The Arctic Death, by Wilford Allen. (1927). 3 stars. An unusual alien invasion story which commences in the arctic but is determined to take over the world. Two scientists go up against this deadly peril. There is suspense and an unusual outcome.
Caterpillars, by E.F. Benson. (1912) 4 stars. This story of a haunted villas is fun, atmospheric, and creepy.
The Willows, by Algernon Blackwood. (1907). 3 stars. A canoe camping trip on the swampy Danube with little islands covered with willows. A truly classic tale of the supernatural.
Vale of the Corbies, by A.J. Burks. (1925). 2 stars. Meh. Nightmares, ravens, madness.
The Repairer of Reputations, by R.W. Chambers. (1895). 1 star.
The Gray Rider, by C.H. Craig. (1927). 2 stars. Predictable.
The Nightmare Road, by Florence Crow. (1934). 4 stars. This is a fun, little Halloween tale.
Beyond the Door, by P.K. Dick. (1954). 1 star. Too silly.
An Unnatural Feud, by N. Douglas. (1908). Also known as Elfwater by Normyx. 3 stars. This is an interesting weird tale that starts as a description of a mythical stream known as The Elfwater, and then moves into an unusual life long feud between a mother and son.
The Witch in the Fog, by Alexander Faust (Harry Altshuler). (1938). 2 stars. A tale of revenge involving Shiva.
The Fourth Dimension, by C. Ford. (1927). 2.5 stars. A man rowing at his club capsizes his canoe. A bit predictable.
The Ring, by J.M. Fry. (1932). 2 stars. A cursed Egyptian ring and a skeptic meet up.
Special News Bulletin, by V. Gaddis. 4 stars. A predictable outcome, but nonetheless a fun story. Listening to the news on the radio on a plane trip.
Cleanup on Aisle 22, by Ian Gordon. 1 star.
August Heat, by W.F. Harvey, (1910). 2 stars. I don't think this story holds up in an era with air conditioning. A short story with a cliff hanger/non-ending.
Graves and Goblins, by Nathaniel Hawthorne. (1804). 2 stars. The ghost of a young man appears to be in a perpetual limbo.
The Children of the Night, by R.E. Howard. 1 star.
The Fearsome Touch of Death, by R.E. Howard. 5 stars. A man stays the night in an empty house with a corpse.
The Fire of Asshurbanipal, by R. E. Howard. 4 stars. An Indiana Jones type of adventure. This is a terrific blend of adventure and Cthulhu Mythos.
The Thing in the Cellar, by D.H. Keller. (1932). 5 stars. An excellent psychological horror story that is actually written by a psychiatrist.
Bells of Horror, by H. Kuttner. (1939). 3.5 stars. This is a creepy story in the vein of Lovecraft. The rediscovered bells are said to hasten the return of the god of blackness/darkness.
The Salem Horror, by Henry Kuttner. (1937). 3 stars. A witch house, a curse, strange noises, bad dreams. Throw in the old gods and the Necronomicon and this story has it all.
Demons of the Film Colony, by T. LeBerthon. (1932). 2.5/3 stars. What's interesting about this story is that it involves a meeting that actually took place at Universal between Boris Karloff and Bela Lugosi in March, 1932 .
The Black Dead Thing, by F.B. Long. (1933). 5 stars. What a creepy, good tale to read if you happen to be on a cruise (or any other time).
The Last Test, by HPL. 3 stars. The story touches on politics, a mad scientist, a thwarted romance, a mysterious North African factotum, and a race for a cure to a 'black fever'. Throw in some evil books, some eldritch gods, and some iffy scientific experiments and an interesting Lovecraft tale ensues.
The Lurking Fear, by HPL. 2 stars. Strange things are happening in the Catskill mountains when thunder and lightning occurs.
Two Black Bottles, by HPL. 2.5 stars. A story of soul stealing.
The Devil, by Guy de Maupassant. 2 stars. This is a short story involving some vey unpleasant people. As his mother lays dying a farmer hires a woman to sit with her until the end so that he may finish his harvest.
The Terror, by Guy de Maupassant. 2 stars. The story is about a man who is going to get married because he is afraid of being alone. It is insulting to the woman; he might as well have gotten a dog.
The Cask of Amontillado, by E.A. Poe. (1846). 4 stars. A classic.
The Tell Tale Heart, by E.A. Poe.(1843). 4 stars. Another classic.
The Paradise of the Ice Wilderness, by J. Regis. (1927). 4 stars. A sea captain recounts his adventure in the frozen north. It's a short story in the vein of 'Journey to the Center of the Earth', in that there are undiscovered wonders still to found in the remotest of places.
Hey, You Down There!, by H. Rolseth. 4 stars. Though predictable this is still funny.
Dracula's Guest, by Bram Stoker. 4 stars. A chapter cut from the original Dracula, it makes a good stand alone.
The Shadow on the Moor, by S. Strauss.(1928). 2 stars. Don't follow shadows at night on the moor.
The Gong Ringers, by H Vokine. 2.5 stars. An okay mystery.
The Tree-Men of M'Bwa, by D. Wandrei. 4 stars. A fun creepy story that takes place in Africa with tree people who are ruled by an ancient alien creature.
The Red Room, by H.G. Wells. (1896). 3 stars. A man decides to spend the night in a haunted room in a castle that is inhabited by three aged caretakers.

The longest collections narrated by Horrorbabble are among my favorites. Mix a drink, light your pipe, sit by the campfire, and drift into the foggy chilling worlds depicted by authors with far more depth than most today....and all this with a fitting tone and rhythm. This is a wonderful collection. Highly recommended!